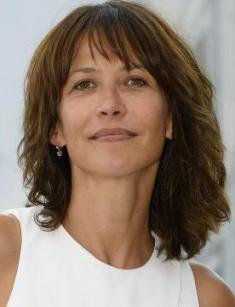 Sophie Danièle Sylvie Maupu, known as Sophie Marceau, is one of the brightest French actresses. She became famous in her teenage years thanks to the La Boum dilogy and turned into the international celebrity after the lead parts in Anna Karenina, Marquise, and Happiness Never Comes Alone. Besides, the talented woman is a singer, writer, and director.

Sophie Marceau was born in a poor neighborhood of elegant Paris in 1966; she was the second child in the family. Her father, Benoît Maupu, worked as a truck driver; the mother, Simone Morisset, was a salesperson in a small private store.

When the girl turned nine, the parents divorced. Sophie was not a diligent student: she was daydreaming all the time and forgetting to do her homework; she often went for a walk after school ignoring school tasks.

As the mother realized her daughter would hardly earn a university scholarship, she decided to find a different way and took Sophie to a modeling agency. Marceau learned how to keep posture, move gracefully, and pose in front of a camera; she also picked up some acting bases. This is where movie agents found the 14-year-old model. Soon, the teenager became the most promising young star in France.

Apart from cinematography, Marceau debuted on the theater stage. She participated in Jean Anouilh’s modern interpretation of the Greek myth, Eurydice, and won the Moliere Award for Best Female Newcomer. Besides, Sophie played the lead part in Bernard Shaw’s Pygmalion.

The artist tried herself as a singer, too. At 15, she sang “Dream in Blue” with the composer François Valéry; the studio album Certitude followed a couple of years later. The songwriters who collaborated with young Vanessa Paradis created the songs for her, but the project was a financial failure. Since that time, Sophie has never been engaged in music.

When the creators of the youth comedy La Boum needed a young actress, they began to look for one in modeling agencies. Dozens of girls auditioned for the role, yet it was Sophie who gained the role of the schoolgirl Vic Beretton. The movie was a tremendous success, as well as the next part, La Boum 2. The beginning artist won the prestigious César Award.

At 16, Marceau co-starred with Jean-Paul Belmondo in the comedy Happy Easter, Catherine Deneuve in the action movie Fort Saganne, Gérard Depardieu in the crime drama Police, and Tchéky Karyo in the drama Mad Love. All these roles were primary and made the actress one of the most popular figures in France.

The roles in the melodrama The Student, the military picture Chouans!, the tragedy My Nights Are More Beautiful Than Your Days, the comedy Fanfan, and the adventure movie Revenge of the Musketeers were more mature. Most camera operators emphasized that Marceau was one of the most sensitive artists they had ever worked with.

In the mid-1990, Sophie appeared in the first Hollywood movie, Mel Gibson’s historical action Braveheart, and personified Princess Isabella of France. Soon, she was invited to play the main character in Anna Karenina and visited Russia. At that period, the woman also worked on the light comedy Marquise, the melodrama Firelight, and ironic Lost & Found.

By the way, Sophie is among the three hottest girlfriends of James Bond. She appeared in the 1999 movie The World Is Not Enough and played the “villain” Elektra King. Although the character died, she stuck in the audience’s memory for a long time.

At the beginning of the 21st century, the artist’s popularity remained high. Sophie played in the mysterious horror Belphegor, Phantom of the Louvre, the war drama Female Agents, the romantic comedy Changing Sides, and With Love... From The Age Of Reason. Besides, the audience took fancy in the melodramas Happiness Never Comes Alone, Quantum Love, and The Missionaries.

In addition to acting, Marceau proved to be a talented director. She debuted with a short love story L'aube à l'envers; soon, the drama noir thriller Trivial, and the melodrama Speak to Me of Love. The latter project brought Sophie the Best Director Award at the Montreal World Film Festival.

As Sophie Marceau confesses, she regrets her early relationships with men; she believes her temper became vulnerable and hysterical because of that. The woman had many short-term affairs. The improvement took place when she met the Polish director Andrzej Żuławski who was 26 years older than she. The couple fell in love and married in a while; the son Vincent was born in this union.

When the actress was working on Braveheart, she had a romance with Mel Gibson that caused the divorce with Żuławski. Nothing worked out of it, though. Soon, Sophie met her second husband, the producer Jim Lemley, in St. Petersburg where she starred in Anna Karenina. They had a daughter Juliette.

Once again, the marriage did not last long. In 2007, the French beauty started dating Christopher Lambert; they met at the movie set of Trivial. At that moment, the actress had just divorced Lemley, and Christopher broke up with the actress Diane Lane. The lovers lived in a common-law union for five years and then married. However, they announced their divorce in 2014 but stayed on friendly terms.

In 2016, 50-year-old Marceau had a romance with the popular chief cook Cyril Lignac who was eleven years younger. The age difference did not prevent the couple from spending much time together; the paparazzi frequently took their pictures. Soon, tabloids published the news about the lovers’ break-up; the reason remained unknown.

Sophie likes to swim; she used to practice with professional athletes. Besides, the woman is fond of painting and creates still-life, landscape, and portrait works. She wrote an autobiographical novel Telling Lies in 2001.

The celebrity makes use of her bright appearance in collaboration with popular brands. She used to be the spokesperson for Guerlain cosmetics, advertised Champs-Elysees perfume, and promoted Chaumet jewelry. As a social activist, the actress is concerned about environmental issues, even though she has not been a passionate protest member.

Sophie loves to walk barefoot and does it not only at home but also in Parisian streets; many people were shocked to see that. Marceau prefers to drive barefoot, too. She did not wear any shoes when she visited Gorky House of Scientists in St. Petersburg. According to the artist, it helps her feel the atmosphere around better.

Today, Sophie Marceau continues to work on movies. Despite her age, the woman does not hesitate to appear naked, as it was in the 2015 movie Jailbirds; she looks as good as her younger colleagues. Marceau has been a vegetarian for many years; her lifestyle is healthy, and she often does exercise.

The celebrity often posts stage pictures on her Instagram. There are many pictures without makeup, too. Sophie uses little cosmetics: only a lip gloss and eyeliner when she attends social events.

Today, Sophie lives in a private house in a suburban area of Paris. The actress liked to travel, but now she prefers gardening and walking in the nearby forest.

Her children have grown up: Vincent went to England to study; the daughter is still with her mother. The young woman reminds of her mother: she is a tomboy and daredevil.

There is no information on whether Sophie is dating someone at the moment. She often told journalists she did not want to be alone and dreamed of sharing her life with a man. Perhaps, the news about the artist’s boyfriend will come soon.