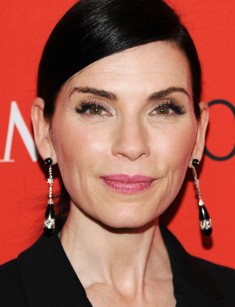 Julianna Luisa Margulies is an American actress who became famous for the television series ER and The Good Wife.

Julianna Margulies was born in Spring Valley, New York. Her parents came from Eastern Europe. Father Paul Margulies was engaged in commercial writing, and mother Francesca Goldberg was a ballerina, then she taught choreography. Julianna was the third child in the family, and she has two older sisters. By the way, Paul and Francesca went to America just before the birth of their youngest daughter, and before they had lived in Israel for a long time.

However, Margulies often moved from one place to another. Julianna lived with her relatives in France, England, and New York City. When the future actress was a teenager, the family finally settled in the city. She graduated from high school and then obtained a BA in humanities from Sarah Lawrence College. There, Julianna liked acting profession thanks to the student theater, where she spent her free time.

Julianna Margulies decides that she wanted to film. To make her dream come true, she went to study again, this time she attended The Acting Studio, private courses, in New York. Soon the actress became famous not only in her native country but worldwide thanks to a popular television series. Since 2000, the actress has also regularly performed on the theater stage.

At first, Julianna Margulies appeared in episodes of various television projects. Having gained experience, the actress managed to convince the producers of the new medical series ER to allow her to portray one of the title characters, nurse Carol Hathaway. The actress played in this popular series for six years, until the end of the 1990s, and in 2009 she returned to the same role.

During this break, Julianna not only built a theatre career but also appeared in several full-length top-grossing films. Movie lovers paid attention to the crime drama Traveller, the family story Evelyn and the horror film Ghost Ship.

Margulies became very famous when she returned to the big screen in 2009. At first, the actress took part in the comedy City Island, and then the new legal series The Good Wife, for which Julianna won the Emmy Award for the Best Actress in a Drama Series. It should be said that viewers liked the movie so much that the creators still shoot new episodes.

Julianna Margulies played the leading role of Alicia Florrick. The actress’s heroine is the wife of the district attorney. In the beginning, the heroine's husband is involved in a huge sex scandal, then he is accused of corruption and goes to prison. So Alicia is left alone, forced to keep the house and raise two children alone.

However, the heroin obtained a degree in law, which helped her a lot. Alicia did not pursue her profession for 13 years, but the position of junior attorney in a prestigious firm of her friend was the only chance for a woman. Therefore, Alicia makes up leeway and improves lost skills. At the same time, the woman continues to raise children, overcome her husband’s betrayal and try to reduce the consequences of the sexual scandal in her life.

Julianna Margulies’s heroine was the title character of this legal television series from the first to the final seasons.

The actress’s personal life does not attract the attention of the press with huge scandals. Margulies also tries to hide the details of her life, she is not keen on social networks and does not even have an Instagram account.

Since 1991, Julianna Margulies dated her colleague, American actor Ron Eldard, for more than 12 years. They starred together in the series ER, then collaborated in other projects. Everything was good. Margulies and Eldard even considered each other to be spouses, but over time this relationship faded.

In 2007, the actress married. This time she chose a man who did not work as an actor. Her husband Keith Lieberthal is a lawyer, the son of the famous Oriental scholar, Kenneth Lieberthal.

Before the wedding, they dated for about ten months, which was enough for them to understand their feelings. The union between two hearts became even stronger when they had a son, Kieran Lindsay.

Like many Hollywood celebrities, Julianna Margulies has her own star on the Walk of Fame on Boulevard in Los Angeles. It is an interesting fact that the actress was honored with the 2550th star.

In 2017, a lot of actresses confessed that they were sexually harassed by producers, directors, or fellow actors more than once during their careers. Julianna Margulies also said that there were such incidents in her biography.

The woman told the press that she was harassed by Steven Seagal and Harvey Weinstein. The actress said that both cases were very similar. The young woman was invited to a business interview, but instead, the men met her wearing bathrobes in rooms with candles and made advances at her. In both cases, Margulies could escape.

In the middle of 2015, there was news that the legal drama The Good Wife with Julianna Margulies in the title role was renewed for the seventh season. At the same time, in May 2016, official representatives of the TV channel announced that this season would be the final one.

In 2016, the actress played a cameo role in the comedy series Nightcap. The series is devoted to the behind-the-scenes of the famous television talk show. It shows the lives of those people who are necessary for the creation of the TV show, but they work behind the scenes and viewers do not see them. The plot centers on the manager, who is trying to establish the work and order on the set, despite the mess created by the others.

In 2017, Julianna Margulies played the role of Lily in the tragicomedy The Upside directed by Neil Burger. Nicole Kidman and Bryan Cranston also played the leading roles in the film. The movie premiered in September 2017 at the Toronto International Film Festival, but there was no information about its worldwide release.

At this film festival, one more film with the participation of Julianna Margulies premiered. It was the drama Three Christs directed by Jon Avnet. The actress's colleagues on the set were Richard Gere and Peter Dinklage. This movie was also not released worldwide.

In 2018, it became known that Margulies played a significant role in the satirical comedy Dietland. Joy Nash got the second leading role. The series is based on the 2015 novel of the same name by Sarai Walker. The book tells about the behind the scenes life of the multi-billion beauty industry with an obsession with extreme weight loss and belief in beauty trends.

Julianna Margulies got the role of the editor of the famous New York fashion magazine, and Joy Nash portrayed a ghostwriter who wrote articles on behalf of Margulies’s heroine. Showing the fate of these two women, the creators of the series promised to depict the problems of modern society that appear even in advanced New York. They are misogyny, patriarchy, rape culture, and psychological issues due to unrealistic standards of female beauty imposed by the fashion industry. 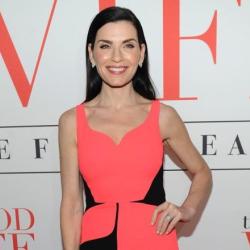