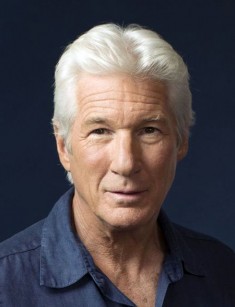 Richard Gere is a talented actor, humanitarian activist, the sex symbol of the 80's and 90's. He was unbelievably popular through his acting career. He has a natural charisma, inner strength and incredible attractiveness, even magnetism. The height of the actor is 180 cm. He was born in 1949, in Philadelphia, US. He grew up in a large family of a housewife and an insurance agent. Richard's family wasn’t very rich. Gere spent his childhood on a farm and helped with the animals and land.

He studied at school and attended gymnastics. Then he entered the University of Massachusetts at the faculty of philosophical sciences. However, he never got a higher education. He went to realize his dream of becoming a trumpeter, then decided to play in the theater and moved to New York.

Richard Gere in his youth

At the beginning of his career, Richard absolutely did not know how to use all his potential. He was calm and in society, he kept quite cold and detached. Friends told that he was gloomy and inexpressive.

Richard Gere in his youth However, casting directors noticed Gere’s talent and invited to try himself at the stage. Gere began with episodic roles in various plays. In 1975, he received the main role in the play "Killer's Head."

The story was very serious and difficult. Richard's character was sitting on the stage blindfolded and was telling his story. He showed all emotions with his intonation. Richard was opened to the world. The play was successful, and the film producers instantly turned their attention to the new star. Later, Richard Gere participated in several successful productions on Broadway. For his role in the play "Bent" he received the Theater World Award.

At the beginning of his film career, in the mid-1970s, the young actor played several roles, which immediately confirmed his title of a bright and extremely attractive actor. And the main role in the film "American Gigolo" turned him into a sex symbol and a man of dreams for millions of fans.

The movies with Richard Gere in the main role are now watched and loved by people around the world. His talent and charisma made him a real hero of generations. Girls are in love with him and men want to be as stylish, successful and attractive as he is.

The romantic film "Pretty Woman", in which Gere played along with incredible Julia Roberts, became legendary. By the way, Richard didn’t want to star in this film for a long time because he did not consider the scenario interesting. His agent persuaded the actor to agree and reminded about his financial debts. The reward could cover it. And it turned out that Gere played his most popular role, having agreed to work for money.

Then there were a lot of successful projects. In 1999, Richard Gere was named "the sexiest man in the world". He appeared in the musical "Chicago", for the main role in which he was awarded the Golden Globe Award.

Richard Gere had many successful films as well as not very successful. There are few most memorable films of the actor. For example, his role in the movie "Primal Fear", where he was in the role of a young man's lawyer (Edward Norton). Another famous role was his in the movie "Unfaithful" and in the film "Autumn in New York", where Gere's partner was a charming young Winona Ryder.

Richard appeared in the story of the devotion and unconditional love of the dog to a man, in the film "Hachi: A Dog's Tale". It made the whole world cry. In this drama, Gere played the role of the owner of the dog, who after the sudden death of Richard's character for many years went to the railway station and waited for his owner from work.

Another unexpected role of Richard Gere in a very unusual role - in the role of the homeless - was released in 2015. It was in the movie "Time Out of Mind." On the set of the film in New York, there was an incident. Richard Gere played a scene in which he went through the trash in order to find food on a crowded street.

One tourist saw this, did not recognize Gere and gave him a piece of pizza. The fact that it was Richard Gere, the girl found out only a few days later from the newspaper.

Well, in Russia in recent years, Richard has become the subject of jokes and anecdotes. In the network there was a video called "And Today We Are 50 ", a video clip from the movie "Nights in Rodanthe" with Richard Gere and Diane Lane.

The clip looks like a love story of two people, who made a video for the song. That is why many Internet users decided that this is a real music video for a song by Russian musicians with the participation of Richard Gere.

Despite the fact that women are in love with him from all over the world, Richard does not have such a stormy personal life. The first long relations he had at the age of 22 years. Then there was his second no less serious relationship. His girlfriends dreamed of a wedding and a family but in his youth, Richard did not want to think about it. Only when he was 40 years old, he was ready for marriage.

Richard Gere was married twice. In 1991, he married the top model Cindy Crawford. Their marriage lasted 5 years. Seven years later, Richard married for the second time. The actress Carey Lowell became his wife. She is known to the public for the role of James Bond’s girlfriend in the film "Licence to Kill."

The couple planned children. And a little bit later their son was born. The boy was called Homer. Also, Carey has a daughter from her previous marriage, who also lived with them. The woman didn’t work and devoted herself to marriage, husband and raising children. It was a happy family, which turned Richard from a rather gloomy into a really happy man who knows how to enjoy every day.

However, Richard met a beautiful TV presenter from India. They had passionate relations, which lasted many months. In 2013, Richard and his wife decided to divorce because of the loss of confidence. There was a closed trial. And as witnesses admitted, it turned out to be a painful and extremely long process (three years). The couple divorced in 2016.

Richard Gere continues to actively participate in various projects, despite his age. He gets proposals for roles, which only a 65-year-old man can play. For example, he starred in the film "The Second Best Exotic Marigold Hotel". The main roles were played mainly by the actors of the retirement age. The main idea of the film is that it is never too late to find love, harmony and achieve happiness. Richard got the first experience of filming in his beloved India.

The actor admits that he does not feel his age and does not hide it either. For example, he does not agree to roles that require a drastic change of image and, in particular, the coloring of his gray hair in a different color. He feels great with his natural gray hair, for which he received the nickname "a silver fox".

He spends his free time with children. He said that his son is not interested in the film industry but they have a lot in common.

Religion plays a very big role in the life of a popular actor. Gere is a Buddhist. Back in the 80s, he became interested in the eastern philosophy. Firstly, he traveled to talk to teachers and gradually became a Buddhist. He publicly advocated for the rights of Tibetans, participated in protest actions and in all ways showed attention to the problem of human rights in this region.

Also, Richard Gere is a member of the public organization for the protection of rights and lands of representatives of tribal peoples living on our planet. He participates in a public dialogue on the problem of the environment and the spread of AIDS (in India, he even sponsored the creation of a center to fight these diseases). The actor financially supports many humanitarian missions in India. Richard Gere is fond of politics. He stands against America's decision to bring troops to Iraq. 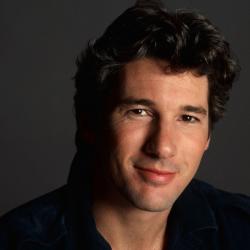