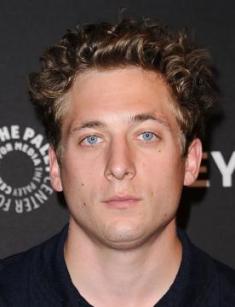 Some actors become associated only with one role. For examples, Linda Hamilton, who played Sarah Connor, and Anastasia Zavorotnyuk, who portrayed a good-natured babysitter. Others will recall Daniel Radcliffe, who appeared as Harry Potter.

American actor Jeremy Allen White has also been included in this list. The man’s fans know the biography of Phillip "Lip" Gallagher from the TV series Shameless better than his own.

Unfortunately, the life of Jeremy Allen White is a closed book. There is little information about the childhood and adolescence of the actor. It is known that his parents’ careers were also connected with the art world. They had moved to New York City before the meeting. Jeremy Allen was born there on February 18, 1991.

It is noteworthy that White’s parents performed together on the same stage for several years. When the lovers decided to get married, they quitted an acting career and obtained other jobs, because there was not enough money to raise the child.

The future actor inherited the love for creativity from his mother. Jeremy was a skillful child who participated in school amateur performances and also practiced dancing, preferring ballet, jazz and tap dance.

But the young man did not like to study at school, so he convinced the principal to allow him to spend half of his study time at the casting agency, which influenced the development of White's career, and the young man became interested in acting at the age of 15. It is worth mentioning that his acting teacher influenced his decision, and thanks to him, Jeremy got a role in his first film.

Jeremy Allen White’s filmography does not include a lot of projects, but he managed to gain popularity and fame.

In Movie 43, the young man played in a story entitled Homeschooled. Jeremy White got the role of a teenage son, Kevin, who is homeschooled. The guy's parents are despots, who began bullying their son. Despite this, Kevin manages to go on a date with a girl, Samantha. The concerned neighbors calmed down for a while until they saw that the guy was "dating” a mop.

It should be said that the man attracted numerous fans thanks to TV shows, rather than full-length movies. The first roles in multi-part films did not bring success. Jeremy appeared in the episodes of Conviction (2006), as well as Law & Order (2007-2008).

In 2011, White could make a name for himself. The young man appeared in the popular TV series Shameless, in which he played the role of Lip. The plot of this comedy-drama series tells about a dysfunctional family, where father Frank (William H. Macy) is an alcoholic, drug addict, and criminal, raising six children.

Phillip "Lip" Ronan Gallagher is the oldest brother. Moreover, he is a wunderkind who can solve any mathematical problem. Despite an outstanding mind, Lip’s actions contradict his beliefs, for example, he dates Mandy Milkovich, while he is actually in love with a woman of easy virtue, Karen Jackson.

After the depression, the guy refuses to go to university, begins to drink, and becomes like his father. Nevertheless, in the future, Lip tries to get rid of this addiction, and people persuade him to go to the Alcoholics Anonymous club.

Jeremy Allen White admitted in an interview that he and his character Lip are completely different people, but they also have common features, namely, dislike for high school.

It is noteworthy that the actor prepared for his role thoroughly and even before the shooting of the pilot episode of the first season, White had attended anonymous alcoholics meetings to listen to people’s life stories. When the young man was in Chicago, he tried to feel the spirit of this place, located on the southwest coast of Lake Michigan.

"I thought it was important to show how comfortable Lip looked and felt in Chicago. Now that other actors and I have been doing this for a long time, we can easily memorize important details and start shooting,” Jeremy said in an interview.

Jeremy White does not like to make private life public, but it's hard to hide all the details from journalists, especially if your girlfriend is a colleague on the set. It is known that since 2011, the young man was in a relationship with Emma Greenwell, who performed the role of Mandy Milkovich, this heroine loved Lip Gallagher who did not love her back.

The young people dated until 2015 but eventually decided to remain friends. Reporters do not know whether the actor has a girlfriend now or not. White has not posted photos on Instagram, depicting him together with a woman. It is also worth mentioning that Jeremy loves to eat and likes pets. Besides, the young man has a sense of humor. In his free time, White reads books and goes to the gym.

Jeremy Allen White continues to play in Shameless. The new season is scheduled to be released in November 2018.

At the end of the previous season, Lip attended an anonymous alcoholics meeting. The hero of the series has already chosen a right path, but his teacher’s troubles knock the guy off-balance. But instead of drinking alcoholic, Lip Gallagher begins to work hard in the studio. It remains a mystery whether Jeremy White’s hero will lose his willpower in the new season or not.

Jeremy Allen White has a net worth of $8 million.