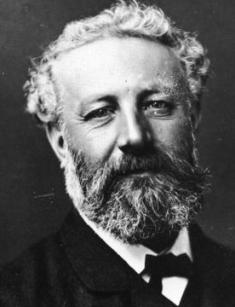 UNESCO statistics say that books of this classic of the adventure genre, French writer and geographer Jules Gabriel Verne are the second most-translated novels after the works of the "mother of detective stories," Agatha Christie.

Jules Verne was born in 1828 in the city of Nantes, located in the mouth of the Loire, in fifty kilometers from the Atlantic ocean.

Jules Gabriel was the firstborn in the family of Verne. A year after his birth, his brother Paul appeared, and six years later, his sisters Anna, Mathilde, and Marie were born with a difference of two-three years. The head of the family was a second-generation lawyer Pierre Verne. The ancestors of Jules Verne were Celts and Scots who moved to France in the XVIII century.

In childhood years, the range of hobbies of Jules Verne was determined: the boy avidly read fiction, preferring adventure stories and novels, and knew everything about ships, yachts, and rafts. His younger brother Paul shared Jules's hobby. Love of the sea was instilled in the boys by their father, a shipowner.

At the age of 9, Jules Verne was sent to a closed boarding school. After graduation, the head of the family insisted on the admission of the eldest son to law school. The guy did not like the law, but he had to obey his father, so he went on and passed the exams at a Paris law school. Youthful love of literature and a new hobby – theater – were a great distraction from lectures on law for the aspiring lawyer. Jules Verne disappeared behind the scenes in the theater, did not miss a single premiere and began to write plays and libretto for operas.

The father, who paid for his son's studies, got angry and stopped funding Jules. The young writer found himself on the verge of poverty. Alexandre Dumas supported the aspiring author. On the stage of his theater, he developed a production based on the play of his 22-year-old colleague, entitled Les Pailles rompues (The Broken Straws).

The audience liked the production, and Dumas published the play. In those years, Jules Verne met the son of Dumas – Alexandre Dumas Jr. and Victor Hugo.

To survive, the young writer worked as a secretary in the publishing house and tutored.

A new page in the creative biography of Jules Verne appeared in 1851: the 23-year-old author wrote and published the first story "The First Ships of the Mexican Navy" in a literary magazine. His debut turned out a success, and the inspired writer created a dozen new adventure stories similar to that one. The characters of his works get caught up in a sequence of exciting events in different corners of our planet.

From 1852 to 1854, Jules Verne worked at the Théâtre-Historique of Dumas, then got a job as a stockbroker, but did not stop writing. From writing short stories, comedies, and libretto, he moved on to creating novels.

Success came in the early 1860s: Jules Verne conceived the idea of writing a series of novels, united by the name The Adventures of Captain. The first novel titled Five Weeks in a Balloon appeared in 1863. The publisher Pierre-Jules Hetzel published the work in his Magasin d'Éducation et de Récréation (Magazine of Education and Recreation). In the same year, the novel was translated into English.

By 1864, the novel was translated to dozens of languages throughout Europe and even on the East, and the author became known around the globe.

A year later, the second novel of the cycle appeared, entitled Voyage au centre de la Terre (Journey to the Center of the Earth). The book tells the story of a Mineralogy Professor, who found an ancient manuscript of an Icelandic alchemist. The encrypted document instructs on how to get to the Earth's core through the passage in a Volcano. The science fiction novel of Jules Verne was based on a theory rejected in the 19th century, that the Earth was hollow.

In 1865 Jules Verne published two novels of the series – From the Earth to the Moon and The Adventures of Captain Hatteras.

The first novel is about an expedition to the North Pole. In the years of writing the story, the pole had not been discovered yet, and the writer described it as an active volcano, located in the center of the sea. The second work refers to the first human expedition to the Moon, and in it, Verne managed to make several predictions that came true. The science fiction writer described the devices that allowed his characters to breathe in space. The principle of their operation is the same as in modern devices: air purification.

Two more predictions that came to life were the use of aluminum in the aerospace sphere and the place of the prototype of the space center ("Gun club"). The author intended for the car bomb, which sent the characters to the Moon, to be located in Florida.

In 1867, Jules Verne gave fans the novel In Search of the Castaways, filmed in the Soviet Union twice. The first time in 1936 it was directed by Vladimir Weinstock, the second – in 1986 by Stanislav Govorukhin.

In Search of the Castaways was the first part of the trilogy. Three years later, Jules Verne published the novel Twenty Thousand Leagues Under the Sea, and in 1874 - The Mysterious Island, his most famous works. The first work tells the story of Captain Nemo, plunged into the water depths on the submarine USS Nautilus. Writer George Sand, who admired Jules Verne's work, gave him the idea for this novel. The novel was adapted to films eight times, including the 1973 European miniseries The Mysterious Island.

In 1869, before writing the last two parts of the trilogy, Jules Verne published a sequel to the science fiction novel From the Earth to the Moon – Around the Moon, whose characters were the same two Americans and the Frenchman.

Jules Verne presented the adventure novel Around the World in Eighty Days in 1872. The readers adored its characters, a British nobleman, Phileas Fogg and his sharp-witted and adventurous valet, Frenchman Jean Passepartout. The story of the journey of these two men has been adapted to movies three times and to animated television series five times, in Australia, Poland, Spain, and Japan. The most widely known cartoon adaptation was the Australian production by Leif Gram, which premiered in the winter of 1981.

In 1878, Jules Verne presented the story of Dick Sand, A Captain at Fifteen, about a young sailor, who was forced to take command of the whaling ship "Pilgrim," whose team died in a fight with a whale.

In the Soviet Union, the novel was adapted to two films: in 1945 there was a black-and-white film directed by Vasily Zhuravlev Fifteen-Year-Old Captain and in 1986 came out Pilgrim's Captain directed by Andrew Prachenko, which starred Lev Durov, Albert Filozov, and Leonid Yarmolnik.

In the later novels of Jules Verne, fans of his works saw the writer's latent fear of the rapid progress of science and a warning against the use of discoveries for inhumane purposes. It was seen in the novel of 1869 Facing the Flag and two books written in the early 1900s: Master of the World and The Barsac Mission. The last work was finished by the son of Jules Verne – Michel Verne.

The later novels of the French writer are less well known than the early ones written in the '60s and '70s. Jules Verne was inspired to work not in the quiet of the office, but during travels. On the yacht "Saint-Michel" (the so-called three ships of the novelist) he sailed on the Mediterranean sea, visited Lisbon, England, and Scandinavia. On the steamer Great Eastern, he made a transatlantic cruise to America.

In 1884, Jules Verne visited the Mediterranean countries. This journey was the last in the life of a French writer.

The novelist wrote 66 novels, more than 20 novels, and 30 plays. After his death, relatives, examining the archives, found many manuscripts that Jules Verne planned to use in writing future works. The readers saw the novel Paris in the Twentieth Century in 1994

His future wife, Honorine Hebe du Fraysse de Viane (Morel) Verne, Jules Verne met in the spring of 1856 in Amiens at the wedding of a friend. Two children from the previous marriage of Honorine (her first husband had died) did not stop the deep affection that Jules began to feel for the girl.

In January next year, the couple got married. Honorine and children moved to Paris, where Jules Verne settled and worked. Four years later, the couple had a son Michel. The boy appeared when his father traveled to the Mediterranean sea on the "Saint-Michel."

Michel Jean Pierre Verne established a film company in 1912, on the set of which he filmed five movies based on the novels of his father.

In the 1970s, the great-grandson of the novelist published a monograph about his famous grandfather, which he wrote for 40 years. It was translated to several languages and appeared on the bookshelves around the world.

Last twenty years of his life Jules Verne lived in Amiens in the house where he dictated novels to his closest ones. In the spring of 1886, the writer was wounded in the leg by his mentally ill nephew – the son of Paul Verne. He had to forget about traveling. Besides the wound, the writer lived with diabetes and blindness for the last two years of his life.

Jules Verne died in March 1905. The archive of the admired writer loved by millions consists of 20 thousand notebooks in which he recorded the information from all branches of science.

At his grave, a tomb was erected, which reads: "Towards immortality and eternal youth."

"The human mind delights in grand conceptions of supernatural beings."

"Nature's creative power is far beyond man's instinct of destruction."

"A true Englishman doesn't joke when he is talking about so serious a thing as a wager."

"Reality provides us with facts so romantic that imagination itself could add nothing to them."

"However, everything has an end; everything passes away, even the hunger of people who have not eaten."

"Before all masters, necessity is the one most listened to, and who teaches the best."

"Science, my lad, is made up of mistakes, but they are mistakes which it is useful to make because they lead little by little to the truth."