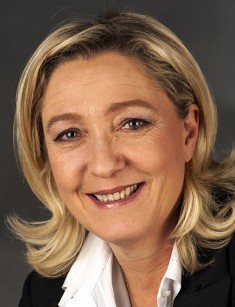 Marine Le Pen is the daughter of Jean-Marie Le Pen, founder of the National Front. She became the leader of the party and the candidate for the presidency in 2017.

Marion Anne Perrine Le Pen was born on August 5, 1968, in Paris, into the family of Jean-Marie Le Pen and Pierrette Lalanne. Marine had two elder sisters, Marie Caroline and Yann.

The father was a charismatic and nationalist politician who lost his parents at 14 and was brought up in a Jesuit college. He continued his education at the Panthéon-Assas University and began his political career early: he became the member of the Parliament in 1956. The young politician took part in the French Republic military operations in Algeria and the Suez Canal.

When Marine turned four, her father founded right-wing party National Front. Soon, Jean-Marie inherited a good fortune and moved to the prestigious Paris neighborhood Saint-Cloud. The man got a large palace, and the children had their personal servants and a driver. Nevertheless, the family atmosphere was tense: because of the father’s political opinions, his family was attacked several times.

In 1976, the scandalous politician’s life was attempted; it was the most disastrous terrorist attack. After the 1983 Paris Parliament elections, Jean-Marie’s party received 12% of the votes. The heavy infowar against Le Pen broke out. There were many conflicts between Marine’s parents; in 1984, they divorced. Marine and her sisters stayed with their father and stopped communicating with their mother.

Marine felt the influence of politics from her childhood. Naturally, she joined her father’s party. As she graduated from the Lycée Florent Schmitt in Saint-Cloud, she entered the Panthéon-Assas University, studied civil and criminal law, and became a Master of Advanced Studies. The next year, she gained a lawyer certificate and started her career in Paris. For the next six years, the woman worked as a lawyer.

Marine Le Pen’s career is intrinsically linked to the national party. In 1993, the woman won her first victory as the FN representative during the legislative elections in Paris' 16th constituency. The third place was a success for Marine, even though she gained no seat in the Parliament.

Five years later, Le Pen was appointed the head of the party’s law department. Marine finished the lawyer career and threw herself in the political struggle. The same year, the young woman was elected to the Nord-Pas-de-Calais. She worked on civil cases until 2004.

Jean-Marie’s daughter began her party career in 2000. As she proved to be a good regional statesperson, she joined the party administration and became the assistant of the National Front President. Apart from her legal activities, Le Pen was engaged in educational issues and organizational PR campaigns.

As the leader of the National Front, Marine took part in the parliament elections again. In 2004, she managed to become a deputy in the European Union Parliament. In the late 2000s, Marine’s political ratings increased. She became a municipal councilor in Hénin-Beaumont and took a Nord-Pas-de-Calais position again. In 2009, the woman joined the Committee on Employment and Social Affairs in the EU Parliament.

Created in 1972 by Jean-Marie Le Pen, the party spread right-wing socialist ideas. The man had been the leader of the organization until 2011. From that time, his daughter Marine has been performing this function: during the internal elections, she got 70% of the votes. The National Front promotes nationalism and stands against migrants’ domination in France.

Because of his intransigence, Jean-Marie was often accused of racism, and his ideas were not popular among globalist-minded citizens. However, when the flow of refugees and migrants from Africa and Near East increased, more and more native French begin to support the party. The National Front offers to raise the taxes for foreigners and pay an allowance to the country’s citizens only.

When Jean-Marie headed the party, the organization’s views on migrants and minorities were radical. Marine softened the politics a little. Although the party still prioritizes secular French values, the National Front became more tolerant of migrants.

The attitude to LGBT people has also changed: today, the party stands for same-sex marriage prohibition without any opposition to such relationships. Marine Le Pen favors gender equality and encourages the society to ban paranja and burqini. The National Front identifies itself as the party for the French of any skin color. Besides, Le Pen supports the idea of coming back to the national currency and independence from Brussels and the USA.

Gradually, Marine Le Pen was strengthening her positions in the European political arena; in 2014, she became a European Union Parliament member. The number of The National Front deputies was 1/3 of the overall number of seats intended for the French delegation.

The party members promote the idea of the European Union based on the principle of the national security of every state. For this reason, the fraction Europe of Nations and Freedom was created; deputies from the Netherlands, Italy, Great Britain, Belgium, Austria, Poland, and France collaborated there.

In her interviews, Marine Le Pen often criticizes the politics of Angela Merkel, the Chancellor of Germany. As Le Pen emphasized, the German migration politics that many French globalists welcomed enthusiastically should have become a disaster. Marine was right: in 2015, the wave of the migrant crisis covered Germany and revealed the weaknesses of the Chancellor’s politics. When Marine Le Pen delivers a speech, she always protects the rights of France; she believes that lobbying German interests may threaten her country.

Marine Le Pen welcomed the new US President Donald Trump; she was one of the first political figures who congratulated him on his victory on Twitter before the election finished in November 2016. The leader of the National Front positively reviewed Trump’s politics related to migrants from the Near East when the President prohibited them from entering the American territory for four months.

Marine Le Pen does not support the position of the world community in terms of Russia. The politician believes the country should not be seen as a military aggressor that threatens peace in Europe and all over the globe. As for the situation in Ukraine, Le Pen expressed the opinion that it was a conflict between two nations; they happen in some countries.

According to Le Pen, those who speak about the military aggression of Russia are provocateurs who want to erupt war by all means. The politician views the annexation of Crimea as the historical fact: fundamentally, the peninsula has never been Ukrainian. Marine deplores that the world did not see the free will of the Crimean people as the legal political decision.

Similar to her father, Marine Le Pen has been married twice. Three children were born in the first marriage: Jehanne, Louis, and Mathilde. As the woman’s career was developing, the relationship with the first husband deteriorated. In 2002, the spouses broke up.

At the age of 43, Marine started living in a civil marriage with her party member Louis Aliot. Today, the politicians continue their relationship but avoid making it public.

Although Marine is a busy person, she keeps fit; her height is 174 cm. Le Pen pays close attention to her make-up and hairstyle; she always looks spotless.

In 2014, the pre-electoral presidential campaign began. The leader of the National Front Marine Le Pen joined the campaign. It was not her first attempt to become the President. In 2012, Marine also participated in the presidential race and took the third place.

Le Pen’s image improved, and the politician had good chances to gain the presidency in France. Her rating was 25%, and she used to be the leader among the three candidates: Emmanuel Macron had 24%, and François Fillon got 19%.

On March 24, 2017, Le Pen met the Russian President Vladimir Putin in Moscow. In her pre-electoral speech, Marine promoted building the multi-polar world and rejecting the hegemony of a single world’s leader imposing their modalities on other countries.

Thus, Marine encouraged the world not to prolong the sanctions against Russia: the economic politics prevented both countries from increasing their prosperity.

Some political experts doubted the leader of nationalists would gain the presidency; others emphasized it was possible in the light of Brexit and Trump’s victory in the United States.

Eventually, it was Emmanuel Macron who got the majority of votes and became the new President of France. 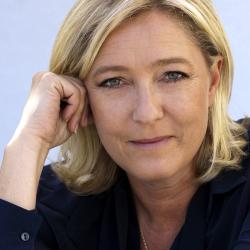