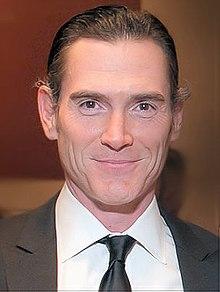 William Gaither Crudup is an American actor who is known not only on the movie screen but also on the stage. He is mostly known for his roles in the movies Almost Famous (2000), Spotlight (2015), and After the Wedding (2019). Crudup received a Tony Award for his appearance in the play The Coast of Utopia.

William Crudup was born in New York in 1968 to Georgann and Thomas Henry Crudup III. His parents got divorced but remarried again when their son was in high school. However, they separated eventually. William also has two brothers, Tommy and Brooks, both producers. When Billy was eight years old, his family left New York and moved to Texas and then to Florida.

Speaking about his education, William attended Saint Thomas Aquinas High School in Florida. Then, he entered the University of North Carolina and started acting at the LAB! Theatre and in the UNC-STV's most popular show, General College. In 1994, Crudup received a degree of a Master of Fine Arts at the New York University's Tisch School of the Arts.

In the 1990s, Crudup appeared in movies like Sleepers (1996), Inventing the Abbotts (1997), and Without Limits (1998). In 1999, he played Ashitaka in the English animated feature Princess Mononoke. Next year, William starred as Russell Hammond, the member of the band Stillwater in the film Almost Famous (2000). In 2006, the actor had some roles in the spy films, Arch Cummings in The Good Shepherd and John Musgrave in Mission: Impossible III.

In 2007, Crudup had the central role of Henry Roth in the film Dedication. In 2009, he played the superhero Doctor Manhattan in Zack Snyder’s Watchmen. The movie turned out to be not so successful: in North America, it was in the lower half of the 32 movies based on a DC Comics just a little ahead of Batman & Robin (1997).

In 2005, in one of his interviews, William said that his appearance in the ads changed his life because it gave him the financial freedom which he needed to develop his acting career. For instance, in 1998– 2005, he worked as the narrator for the MasterCard’s commercial "Priceless."

In 1995, William had his debut on Broadway in the Lincoln Center Theater when played in the Arcadia. In 2002, the actor was nominated for a Tony Award for his performance in The Elephant Man and 2005, he got a nomination for his appearance as Katurian in The Pillowman. In 2006–2007, Crudup played a famous Russian critic Vissarion Belinsky in The Coast of Utopia, and for this project, William won a Tony Award in 2007.

For 2019, Crudup has a net worth of $6 million that he earned from his appearance not only in films but also in ad campaigns and on a stage.

In 1996–2003, William had a relationship with an actress Mary-Louise Parker. Mary-Louise was pregnant with Crudup’s child, William Atticus Parker, when he left her and started dating another actress, Claire Danes. In 2006, the couple separated.

At the beginning of 2018, Crudup attended a BAFTAs after-party in London with Naomi Watts, his colleague and as it turned out, his new girlfriend. The couple worked together when they had the leading roles in the series Gypsy (2017), and Watts played the wife of William’s character.

The actor has received various awards for his work nine times, including Paris Film Festival Award for his appearance in the Jesus' Son (1999), Gold Derby Award for the Spotlight (2015), and Tony Award for the play The Coast of Utopia in 2007.