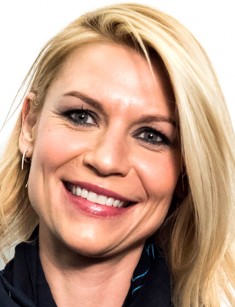 Claire Danes is a talented American actress. The viewers love her because of a sincere play, attractive appearance and, of course, bright roles. Claire appeared in dozens of films and the actress is not going to stop.

The future star was born on April 12, 1979. The girl spent her childhood in Manhattan. Her father is a programmer and the mother works as an artist. It cannot be said that Claire's early years were cloudless. The girl's mother, being a creative person, organized an improvised theater studio for neighbor children. Little Claire Danes wanted to be better than others and to please her mother.

Because of the constant nervous tension the girl even had mental problems. Claire imagined monsters. Thus the subconscious of the child tried to attract the attention of the mother, whom Claire loved so much.

When the girl was 6 years old she began attending a dance studio. And three years later, she had no nightmares anymore. Claire Danes wanted to become an actress. Parents were happy with the decision of their daughter. They sent Claire to a theater group, and after a while, the girl was already studying acting at the famous Lee Strasberg Theatre and Film Institute in Los Angeles.

The way to success was thorny and sometimes full of disappointments. At some point, Claire doubted her own choice and even entered the university, at the Faculty of Psychology. However, the passion for cinema was stronger, and the girl took up the career of the actress.

The creative biography of Claire Danes began, as often happens, with the episodic roles. Mainly, the beginning actress got roles in the serials. The first one was the sensational "Law & Order". The talented blonde was noticed, and already in 1998, Claire got a significant role in the series "My So-Called Life." This work brought the girl love and recognition of the audience, as well as the coveted Golden Globe award. Claire starred along with Jared Leto.

The career of Claire Danes began to develop rapidly. Soon she starred in such as films "How to Make an American Quilt", “Little Women", "Home for the Holidays". Unfortunately, the girl played only secondary roles. However, this did not prevent Claire from becoming successful among viewers and directors.

In 1996, Claire Danes got the main role. The actress was invited to play Juliet in the film "Romeo + Juliet". Claire played along with Leonardo DiCaprio. The modern interpretation of Shakespeare's tragedy "Romeo and Juliet" was successful. And Claire achieved her goal: now the girl was not just famous. The name of Claire Danes fell into the list of the world-class stars.

After this role, the actress starred in such films as "The Rainmaker" by Francis Ford Coppola and "U-Turn" by Oliver Stone. Unfortunately, despite her name in the credits, these films were not very successful.

In 1998, the girl was invited to the role in the film "Les Misérables". The scenario is based on the novel of the same name by Victor Hugo. It is noteworthy that in the same year, Claire Danes was invited to the main role in the legendary film "Titanic" by James Cameron. However, the girl did not agree to this proposal, joking that she could not stand another movie with Leonardo DiCaprio.

In 1999, the film "Brokedown Palace" was released, in which Claire Danes played in a creative tandem with the actress Kate Beckinsale. The film was very exciting: two friends went to Thailand. There the girls met a charming guy.

However, this handsome guy brings the girls some troubles. The police found drugs in the backpack of one of the girls. They got in a Thai prison.

In 2000, Claire, tired of endless filming, decided to leave the cinema. The girl refused all offers and entered Yale University. She wanted to become a psychologist. The actress tried to learn a new profession for two years. Finally, her love for the cinema won, and Claire Danes returned to the acting career.

The next famous film with Claire Danes was the film "The Hours." This drama directed by Stephen Daldry was nominated for "Oscar". It tells about three women. The first woman is a writer Virginia Woolf (Nicole Kidman). She has a creative and life crisis.

The second heroine is a housewife (Julianne Moore), who reads the book of Virginia Woolf and gradually comes to a decision to commit a suicide. The third heroine of the film (Meryl Streep) is a lesbian. She decided to have a party for a friend who dies of AIDS. Claire played the daughter of the last heroine.

In 2007, the fantastic blockbuster "Stardust" was released. The film really turned out to be successful. Claire played along with Robert De Niro, Sienna Miller, Michelle Pfeiffer. This film is the long-awaited adaptation of the eponymous masterpiece of Neil Gaiman. It is noteworthy that the writer also took part in writing the scenario.

In addition to the cinema, Claire Danes plays in the theatre. The girl even put her own choreographic number in the play "Kids On Stage". And in 2007, she played a talented role Eliza Doolittle in the theatre version of the immortal "Pygmalion" by Bernard Shaw.

The slender blonde girls (height 166 cm, and weight - 50 kg) has never complained about the lack of men's attention. The first bright relations of the actress, known to journalists, were with the musician Ben Lee. This relationship lasted six years.

Soon after breaking up with Ben Lee, Claire Danes began the relationship with Billy Crudup. The couple met on the set of the film "Stage Beauty". However, these relationships were shot.

Finally, in 2009, the actress got married. Her husband was Hugh Dancy. He also is a popular actor. The photo of a happy couple appeared on the "Instagram" and other social networks. Soon, Claire gave birth to the first-born son Cyrus Michael Christopher Dancy.

Now Claire Danes continues to star in films as well as to appear at various social events.

So, in 2016, the girl shocked the public, appearing on the red carpet in a light-up dress.

And in 2017, there was news about the release of the sixth season of the series "Homeland", in which Claire plays the main role of Carrie, a former employee of the CIA intelligence service.