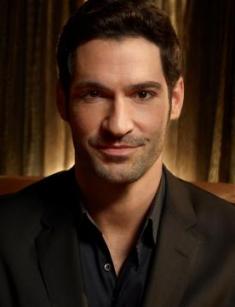 Tom Ellis is a British and Hollywood actor of the Welsh origin, the star of the TV series Rush and Once Upon a Time. The artist got international recognition for the ambiguous role of Lucifer Morningstar, or the devil himself, in the scandalous series Lucifer that provoked a public outcry and petitions even before it was aired.

Tom Ellis was born on November 17, 1978, in Wales. His mother worked as a music teacher, and the father was a Baptist priest. The boy spent his childhood in Bangor where his father served and then went to High Storrs School in Sheffield. The would-be actor and his three sisters learned how to play musical instruments early; Tom played the trumpet and French horn in a local youth orchestra.

Ellis began to consider acting as his career at 12. His drama teacher met his parents at a school party and told them that Tom should develop his talent. Christopher John and Marilyn Jean never wanted to raise a child star and make their son be somebody – they only supported him.

Tom did not have much choice after graduation: he could not allow studying in London. The young man’s friend studied at the University of Glasgow. As soon as Ellis went to see him, he fell in love with the city and entered the Royal Conservatoire of Scotland.

One day, students were offered to create a pantomime about anything they wanted. Tom chose Beauty and the Beast and personified two characters, the Beast and the Prince. It was his first professional work.

Tom Ellis debuted in cinematography in 1985: he got a small part in the series EastEnders. 20 years later, in 2006, he appeared in the same project and played Dr. Oliver Cousins. It was a breakthrough role: directors started inviting him.

In 2007, Ellis appeared in the iconic fantastic series Doctor Who: he personified Tom Milligan in “Last of the Time Lords”.

2010 was marked with another British hit, the fantasy Merlin. It is different from the classical legend about King Arthur and the old magician Merlin: Merlin and Prince Arthur are peers, and the sorcerer becomes his servant and friend. Because witches and wizards are persecuted, Merlin has to keep secret his gift from everyone, including Arthur. Tom Ellis played a secondary character, King Cenred.

The next year, Tom joined another fantasy project: the American series Once Upon a Time. He played Robin Hood. The story takes place in a magic world where famous characters from the folklore or original works reside.

Snow White, Prince Charming, Evil Queen, Rumplestiltskin, Pinocchio, Captain Hook, The Talking Cricket, the Wicked Witch of the West, White King, and other characters appear in the series. The story begins when Evil Queen curses the magic world so that the happy endings in fairy tales would go to antagonists. Snow White’s daughter has to save the country: the curse has not touched her because she lives in the real world.

Ellis’s career is not limited to fantasy and fantastic projects. Overall, the man has participated in more than 60 series and movies, including Agatha Christie's Poirot, Miranda, Midsomer Murders, Buffalo, Monday Monday, and so on. In 2014, the artist played in the American medical drama Rush; he gained the lead role of the party doctor William Rush.

Lucifer Morningstar from the series Lucifer made Ellis tremendously popular. The filming began on May 9, 2015; by the end of the months, the religious Americans demanded the project be stopped because it offended their beliefs. The American Family Association initiated the petition against the series and published it on their website. According to the association, it was a mockery to show the devil’s good traits. Within two months, more than 11 000 people signed the petition, but it never influenced the further production.

The creators of Lucifer replied that the plot was not based on the Bible or other sacred texts: the series of comics by Neil Gaiman and Sam Kieth published by Vertigo, the imprint of DC Comics.

As the story runs, Lucifer gets bored in hell and goes to Los Angeles. Initially, his lifestyle is pretty suitable for the devil: he opens a luxurious bar where he and visitors indulge themselves in sinful activities. Everything changes when a murder takes place in the bar. Lucifer faces the police and suddenly starts working for them; his colleagues are surprised to discover that everybody around him tells the truth. Lucifer becomes a consultant there. However, he is hardly interested in justice: the detective Chloe Decker (Lauren German) attracts his attention; for some reason, the woman is not affected by the devil’s charm.

The pilot was presented at San Diego Comic-Con in 2015. The full version came out in 2016.

In 2006, Tom Ellis married the actress Tamzin Outhwaite. Two daughters were born in this family; the actor has another daughter from the previous relationship.

The spouses spent seven years together and announced their divorce in August 2013. According to Tamzin, her husband cheated on her. The artists separated in 2014.

Tom Ellis is a passionate soccer lover. He used to support Sheffield Wednesday; today, he is a great fan of Arsenal.

The actor shares the details of his everyday life on his verified Instagram page: photos with friends, kittens, food, feet, and so on. More than 3.1 million people follow him there.

Lucifer was premiered on January 25, 2016. Symbolically, the first season consisted of 13 episodes. In spring, Fox channel announced the second season. Four seasons have been released so far.