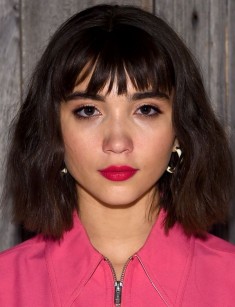 The young star of the Disney Channel, Rowan Blanchard, made her screen debut at the age of 5. At the age of 13, she started acting without a break. Her first well-known work was the role in the film Spy Kids: All the Time in the World directed by Robert Rodriguez, and the most ambitious project to date is the series Girl Meets World. The actress is also known as an activist of the feminism and LGBT movement.

Rowan was born on October 14, 2001, in Los Angeles (California, USA). The family has nothing to do with creativity and acting. Father Mark Blanchard-Boulbol and mother Elizabeth work as yoga instructors, and they also have younger children, daughter Carmen, and son Shane. By the way, Carmen, who is two years younger than her older sister, is also an aspiring actress. The sisters are strikingly similar; the only difference is that Carmen is blond.

Rowen has inherited an unusual appearance from her father, whose parents are the representatives of East and West. A paternal grandfather emigrated to the United States from the Middle East, and he has Armenian, Lebanese, Syrian and Moroccan ancestry. A paternal grandmother is of Swedish, Norwegian, Danish and British descent.

Rowan became interested in an acting profession in early childhood. The girl did not have to put off her dream. She had started acting before she went to school. She made her screen debut in 2010. Rowan played a 7-year-old daughter of one of the title characters in the Hollywood comedy The Back-up Plan, starring Jennifer Lopez and Alex O'Loughlin.

The same year she appeared on television. The skillful girl was immediately cast for the leading role of Caitlin in the children's show Dance-a-Lot Robot. She participated in 5 episodes. One year later, the young actress filmed again. She starred in the movies Little in Common and Spy Kids: All the Time in the World.

Young Blanchard became famous, appearing as the title character, Rebecca, a stepdaughter of OSS agent Marissa Wilson (Jessica Alba), in Robert Rodriguez’s famous fantasy movie. The film grossed over $ 85 million worldwide. In 2012, for the role of Rebecca, the actress was even nominated for the Young Artist Awards for Best Performance in a Feature Film – Young Actress Ten and Under.

In 2014, Rowan connected her career with a new long-running project Girl Meets World. The plot of the family sitcom unfolds around the life of 12-year-old Riley Matthews. The title character lives just like millions of her peers around the world. She has a best friend, Maya Hart (Sabrina Carpenter), two friends, Lucas and Farkle (Peyton Meyer and Corey Fogelmanis).

Riley is secretly in love with Lucas, but their relationships have to overcome a lot of difficulties. Not only teenagers but also parents, who could found out about the feelings and emotions of their children during such important events as the first date, first kiss, jealousy, betrayal, watched the series with interest. No wonder that the series is entitled Girl Meets World.

After three seasons, the project was canceled. At that time, Rowan and her young colleagues were already very famous. Blanchard also starred in other projects of the Disney channel: Best Friends Whenever and Invisible Sister (2015).

After the end of Girl Meets World, Rowan played in the series The Goldbergs. She appeared in 8 episodes of the television show as Jackie Geary, the title character’s girlfriend. In 2018, the actress played a bit part in the fantasy blockbuster A Wrinkle in Time, co-starring with such stars as Oprah Winfrey, Reese Witherspoon, Chris Pine.

Rowan Blanchard leads such a fulfilling life outside of work that her fans don't have time to like her social media posts. By the way, the girl does not imagine her existence without them. She registered her first account at the age of 9. Nowadays her Instagram page has over 5 million subscribers.

Thanks to the movie, Rowan was noticed by world fashion brands that have offered the girl cooperation. Now Blanchard works with the Converse, Miu Miu, Rodarte, Kenzo brands, occasionally poses for seasonal photo shoots as a model (her height is 165 cm). The girl’s style is partly inspired by men's clothing. But when it is hot in summer, she wears high-waisted 1950s swimsuits on the beach.

Besides, the actress is keen on music and even sang a solo in the band Disney Channel Circle of Stars. In the title sequence of Girl Meets World, Rowan and her on-screen friend, Sabrina Carpenter, also performed the song, which became the soundtrack.

There is no acute information about her personal life. During the shooting of Girl Meets World, there were rumors about her love affair with Peyton Meyer. They said that the couple dated in 2015, the reason for these rumors was their photos on Instagram. But Rowan refuted conjectures, and in 2016 she even wrote about her sexual orientation on Twitter:

"In my life – only ever liked boys. Yes, [I'm] open to liking any gender in future."

In spite of the busy schedule, the actress is a public activist. The young lady is a feminist and women's and sexual minorities rights activist, and also opposes gun violence. Rowan first spoke at the UN conference at the age of 13.

“I've been criticized for radicalism, but it’s not so. At all times, young people formed excellent ideas. We may have a clearer idea of many things thanks to fresh views,” Rowan sates.

Not long ago, the feminist wrote the first book “Still Here," in which she shared her autobiographical experiences.

Nowadays, Blanchard continues her acting career. It is possible that the girl’s status in the movie world will soon change.

The actress has said it in an interview:

“Some years ago something happened to me. I suddenly realized that I went on the set and began to think like a director. I love movies more than anything else. It is what I want to do further,” Rowan says because she would like to be equal to such famous directors as Sofia Coppola and Jane Campion. 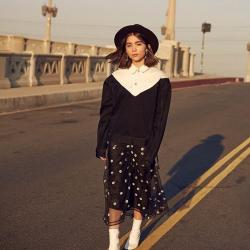