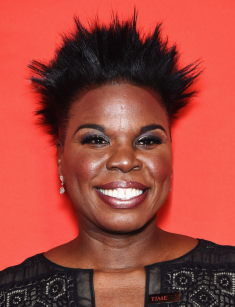 Even though her path to success was somewhat challenging, she never changed her decision to make her name in a comedy world. The 2020 year probably will become the new stage for her creative work as the broad audience will be to see her as a skilled standupper.

Leslie was a multitalented kid. A towering height, ingenuity, and intelligence made from her a promising athlete. Impressive skills and stats helped her to take an athletic scholarship at college. She was good at playing basketball and probably had all the chances to build an athletic career.

However, the young Leslie always wanted something more and searched herself in various fields. She suggested becoming a lawyer as a sophomore. Then she changed her significant several times, finding her calling in business accounting and computer science. Finally, Leslie graduated from the university with a degree in Communication.

Besides studying, Leslie keeps up with working as a disc jockey. Moreover, during her education time, she began performing as a standupper. Interestingly, having a perfect sense of humor, she has never counted herself a funny person. Leslie told them she thought herself as a crazy girl. However, feeling organic on the stage, she continued performing at local clubs. To make ends meet, she also worked at a food restaurant. She decided to move to New York and focuses on honing her skills. She also performed at the legendary club in LA but failed.

The first time in New York was challenging for the comedian. Leslie hadn’t received any positive reviews and even was booed by the audience when she opened up for Jamie Foxx. The famous actor gave her a significant piece of advice. He told her to go and find life experience. He said,

“Go get a job, go get fired, go get your heart broken and go break some hearts.”

Leslie followed his recommendations and took a job. She also continued performing at the local scene. The comedian had been performed in African American circles for about three years. There the standupper was spotted by Chris Rock. He gave her several numbers of influential managers. However, every manager refused to collaborate with Leslie. Then, finally, her luck has improved lately. Rock helped her to get a job at Saturday Night Live. That show decided to add an African American woman to the ensemble in 2013. Leslie landed an audition. She was offered to join the writing group instead of a featured player. A year later, she became a featured player. Her performances were so bright and hilarious that Leslie had become one of the most prominent performers of the show. She received several nominations for her performance at “SNL.”

Gradually things got better. The comedian gained some popularity, and producers saw a potential in her. She appeared on the TV commercial, as well as shows. Leslie continued establishing herself in the comedy world. Mostly, she performed at festivals. Rock also helped her to try herself as an actress. She appeared in several movies, “National Security” among them. In 2016 she joined the cast of “Ghostbusters,” where she played a starring role. Leslie voiced an animated character.

In 2020 Leslie’s special “Time Machine” will appear on the screen at Netflix. That special is going to unleash her potential as a standupper.

The actress prefers not to talk about her private life. Even though she is very secretive, people believe she is dating a secret boyfriend. In one interview, the comedian also dropped a hint on it. Her net worth is estimated at $5 million. It is also known the actress hasn’t been married.

The comedian has got a namesake, a prominent movie editor.

Many people suspected, that her secret boyfriend was her co-star Kyle Mooney. But they aren’t married and even are not in romantic relationship. Once in an interview she said, “I will tell you the type of dude that I like. I like a dude that makes me laugh, and it's not hard to make me laugh - it really isn't - because I like the goofiest things. I love goofy men! I love goofy men.”

At the beginning of her career, Leslie found some support and encouragement in the face of Dave Chappelle. She draws her inspiration in the works of legendary comedians, like Carol Burnett.