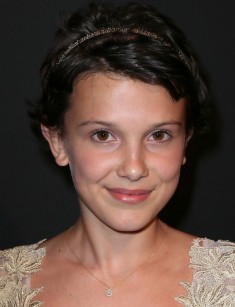 The rising star of the world cinematography Millie Bobby Brown has gained popularity due to the shootings in series Stranger Things. During her rather short creative career, Millie has already conquered the hearts of millions of spectators.

The British-American actress and model has become the youngest person among other people included to the list of the influential personalities of the world according to the version of TIME magazine.

Brown is already a celebrity of A-list and an honorable guest at all the events. Moreover, she is an actress with great perspectives.

Millie Bobby Brown was born on the 19th of February, 2004 in Marbella (Spain). When the girl turned four, her family moved to Bournemouth (Great Britain), and four years later she relocated to Orlando (USA).

The girl was born in a large family; Millie has two sisters and a brother. The girl's parents aren't engaged in the movie industry in any way, both of them work as realtors.

At the age of eight the girl took part in the commercials and already in two years she became the star of the series. Brown appeared in the BBC project under the title Intruders and a little bit later in NCIS and Grey’s Anatomy. Millie performed the major role in the series Intruders. She got the role of the nine-year-old Madison O'Donnell who suffers from the nightmares and headaches after the mysterious meeting with the stranger.

Millie has an androgenic appearance, her skin is pale, and she has a mysterious look. Probably, that’s why the directors often invite Brown to perform the roles of unusual personages. It has happened like this in the series Stranger Things: the actress has played the role of the weird silent girl with supernatural abilities to telekinesis. Especially for the shootings Millie has shaved her hair. Though, the girl’s personage is considered to be the most charismatic.

Bobby Brown has surprised everybody on the movie set with her professional acting skills. She distinguished among other young actors and actresses, as they needed some time to concentrate and Millie managed to cope with everything almost at once.

The skilled and talented acting of the girl couldn't be but noticed, so she was nominated for Screen Actors Guild Award for Best Actress in the drama series. However, it was Claire Foy, who received this award. Bobby Brown appeared on the red carpet of the Golden Globe Awards in 2017 and 2018, but unfortunately, she didn't receive the awards.

Millie together with her colleagues received the award for Best Cast in the Drama Series. The series turned out to be extremely successful. Millie even was compared to Natalie Portman at the beginning of her acting career. When you look at the photo collage of two actresses, it becomes obvious that the similarities in their appearances are just striking.

After the release of the series Stranger Things, the girl became famous overnight. At that time she just turned 12 years. The rising star of movie industry was showered with the offers: Millie received the invitation to play a role in the multimillion action movie Godzilla, she concluded the contract with IMG Models agency and took part in the song video of the popular DJ and musician Sigma. Despite this, the girl hasn’t suffered from the star fever, and her character and behavior haven't changed.

During half a year Brown appeared on the covers of almost all fashion magazines. Among the girl's admirers, we can mention the designer Raf Simons who invited Millie to become the face of Calvin Klein by Appointment clothing line which demonstrates various female beauty. A little bit later Brown received the invitation from Nicolas Ghesquière to take part in the shooting for Louis Vuitton.

At present, the public and critics note Millie's perfect sense of style when the actress appears at the ceremonies and events she usually chooses outfits from Valentino, Burberry and The Coach 1941. At the same time, Millie regularly experiments with her style: so, at the premiere of Stranger Things she was dressed in the gentle white dress of her design, and she chose Converse as her footwear.

In her spare time the girl dresses not less bright: she combines light dresses with jackets and big army boots. In such a way she has deserved the status of the fashion style icon by the version of the French Vogue edition.

The girl doesn't conceal that she has a stylist in her team who helps her to choose outfits. However, she refuses to disclose his name. Moreover, Millie admits that she really likes fashion but most of all she dreams of performing on Broadway. Considering the fact the girl's career has taken off promptly soon her dreams will be realized.

At first, there were assumptions that Millie and Finn Wolfhard had romantic relations. But later it turned out that their romantic relationship was limited by the movie stage, and the teenagers were just friends. What about the kiss in the series it was the first kiss in the girl's life. It seemed like it's too early to speak about the romantic adventures of the beautiful young girl. Though, despite the young age of the actress, her fans already discuss her personal life and her first love.

Official information about the relations of the couple appeared in February of 2018. The singer Jacob Sartorius became the girl’s beloved. Before this, in December of 2017, the couple spent New Year's vacation together and visited Disneyworld with their families.

However, the fans have earlier suspected that Millie and the guy aren't just friends. The admirers had made such conclusions when the singer wrote the following words on his Twitter:

"One more day thinking about you."

Bobby Brown "liked" this post, and in a couple of days published the picture with the teddy bear on her Instagram signing it with the following words:

Recently the lovers have posted the picture where they kiss each other at night on the beach. It has aroused indignation and many angry comments. Ariana Grande, was one of the indignant commentators and she left the comment under the post:

"I wasn't even permitted to leave the house until I turned twenty."

It’s not known whether Ariana Grande meant something negative or just ascertained the fact. Later both of the teenagers removed the publications without explaining the reasons and uploaded another photo from the same location, which was more modest.

At present celebrities regularly publish their joint photos and dedicate romantic posts in the social networks to each other.

What about Millie's hobbies she likes martial arts, what is quite unusual for the girl. Moreover, Millie is a football fan, and together with her father and brother, she supports Liverpool F.C.

In March, 2019 there appeared information about the love affair of Millie Bobby Brown with Romeo Beckham. According to the insider's information, which was provided to The Sun magazine,Millie and Romeo know each other since 2016. They have been together for a couple of weeks. Now they have romantic period in their relations.The insider has also reported, that Romeo's mother - Victoria Beckham approved this relationship.

The actress has an official account in an Instagram social network where she regularly publishes photos and videos from her life.

In 2018 Millie didn't attend the MTV Movie Awards ceremony where she won in the nomination for Best Actress because she had patella fracture. In the video message to her fans, she announced with regret that the doctor didn't allow her to leave home and insisted on the rest. The girl also told that it was for the first time when had broken her knee. Brown showed her crutches to the admirers, but she didn't explain how she was injured.

In one of the interviews, the girl confessed that she was born deaf in one ear. Though, this doesn't prevent Millie to take part in the movies and to sing her favorite songs in the karaoke.

The actress enriches her filmography quickly. Recently there has been released the trailer of the forth-coming great blockbuster Godzilla: King of the Monsters. In this movie, Millie Bobby Brown has taken part. The picture tells about the Monarch agency which faces off against the monster. Mothra, Rodan, and King Ghidorah will struggle against Godzilla. The movie premiere in Russia is set for the 31st of May of 2019.

The Godzilla will be opposed by Montra, Rodan and King Gidora.

At present, the girls are working in the shootings of the third season of the series Stranger Things.

Millie is Aquarius on the Zodiac sign. She is 163 cm tall, and her weight isn't known. Brown has an athletic figure and looks perfect: you can find her shots in a swimsuit on her Instagram page.