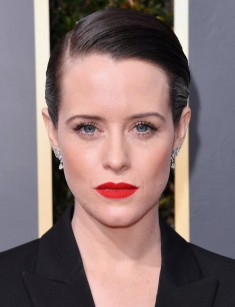 The British actress Claire Foy has the impressive filmography: she participated in many movies with Hollywood stars and even starred in Vampire Academy with the Russian actor Danila Kozlovsky. Foy became famous after she played Elizabeth II in the TV series The Crown: for this project, she was nominated for the 2018 Emmy Award.

Claire Foy was born in the provincial town Stockport, Great Britain, on April 16, 1984. She was the youngest kid in the family. In her childhood, Claire lived in Leeds and Manchester; later on, the family settled in Buckinghamshire.

The girl went to the Aylesbury High School; later, she entered the Liverpool John Moores University and studied drama. In 2007, she received the diploma.

For some period, Claire lived with her friends from the theater studio and embraced the atmosphere of theater and cinema. As the young woman realized she had chosen the right path, she decided to master her knowledge and entered the Oxford School of Drama where she polished her acting skills.

Foy attended the prestigious school for a year and took part in several theater performances: Touched, Top Girls, and Watership Down. The plays staged by Paul Miller - DNA, and The Miracle became her professional debut. In 2008, Claire Foy appeared on TV: she played in an episode of the TV series Doctors.

Soon, BBC producers noticed the pretty young woman: they had been looking for the actress to play the main character in the mini-series Little Dorrit based on Charles Dickens’s work. This role made Foy recognizable; her glossy magazines published her first photos on their covers. Besides, this work brought her the RTS Television Award victory in 2009: she was named the best actress.

Each of the further roles offered by directors helped Claire Foy develop her talents to the fullest. After the debut in the series, the TV movie Going Postal based on Terry Pratchett’s novel under the same title followed. Here, Foy played Adora Belle Dearheart.

In 2011, the fantastic movie about middle ages Season of the Witch came out. Claire played the young woman who became the victim of evil tongues: she was accused of witchcraft. Nicolas Cage who played the brutal knight was Claire’s stage partner.

In 2011, Claire collaborated with the then star Benedict Cumberbatch in Wreckers by Dictynna Hood. The movie was named the best debut at the Moscow International Film Festival.

In one of her interviews, Claire Foy admitted the mini-series The Promise became one of the most pleasant projects in her overall career: the actress liked the image of Erin Matthews.

There, the actress played the role of Kate Balfour; John Malkovich became her stage partner. 2015 brought the new character: Claire personified Anna Boleyn in the series Wolf Hall based on Hilary Mantel’s “Wolf Hall” and “Bring Up the Bodies”.

This project gave her the entry to the great professional life. In 2016, Wolf Hall won the Golden Globe Award and had three Emmy nominations. Thanks to this series, the director Peter Morgan noticed the actress’s talent.

He worked on the movies The Queen starring Helen Mirren and The Other Boleyn Girl with Natalie Portman and Scarlett Johansson. When Netflix offered Peter Morgan the new project, he realized how promising the new movie would be; he was glad to work with Claire Foy. Thus, the actress who had begun her career with little-known short films managed to gain several remarkable roles in full-time projects.

The period of Wolf Hall was particularly difficult for Foy. She auditioned when she was five months pregnant, and the idea of working on the project seemed to be dubious. The actress’s personal life was closely connected with her work.

The woman received the role of the British Queen and unveiled her heart and personality. At this time, her and Stephen Campbell Moore’s daughter Ivy Rose was born. Claire had to take the baby to the movie set and feed her during breaks. Things were more difficult because Claire’s husband was undergoing the brain tumor treatment.

The actress married in 2014. Four years after the family life, she and her husband split up: they lived separately and finally divorced officially. At the moment, the actors are on friendly terms and bring up their daughter together.

Claire Foy is the example of a professional actress’s success. Today, famous Hollywood directors offer her many exciting projects.

In 2018, she starred in Steven Soderbergh’s Unsane and played a mentally unstable person. Working on the thriller, the director used his mobile phone camera to record the actress and transfer the emotions and sensations of the haunted character. Besides, Federico Álvarez offered Claire the role in the sequel of The Girl with the Dragon Tattoo. Damien Chazelle invited the duo of Claire Foy and Ryan Gosling to his project about Neil Armstrong; the movie First Man will appear on the big screen in 2018.

This period has become a significant part of the actress’s career. She has received BAFTA for the role of the Queen in The Crown. Moreover, Foy has been nominated for the prestigious Emmy Award; the results will be announced in September 2018. Now, Claire Foy her movie partner Matt Smith who played Prince Philipp are waiting for the jury’s decision. 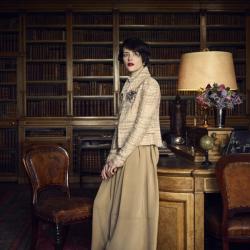