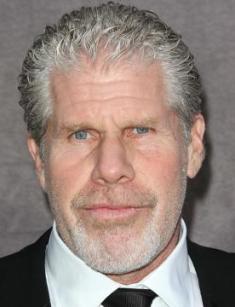 Ron Perlman is a Hollywood star who became famous after the release of the film Hellboy and Hellboy II: The Golden Army.

The boy was born on April 13, 1950, in New York City in a family of Jewish immigrants. The child was named Ronald Francis Perlman. His parents were municipal employees, but his father was fond of jazz and even participated in the performances of a musical group. As a child, Ron was overweight and heavily built. Thus, his peers considered him an outcast. The best friend and adviser of the future actor was the father.

Passion for theater helped the young man make his way in life. After graduating from Lehman College, where Ron studied the Fine and Performing Arts and participated in the productions of an amateur theater, the young man entered the Department of Theatre Arts at the University of Minnesota. In 1973, he graduated with a master's degree in theater arts.

From a young age, Ron Perlman had a non-standard appearance. The actor is 6.07 ft. (185 cm) tall and weighs 194 lbs. (88 kg). Ron's under-jaw looks disproportionately large, and the left eye is smaller than the right one. Fans and critics point out that the actor looks like a Neanderthal or an aborigine.

Reporters state that Ron looks like Maine Coon cats, which was brought to North America long ago and settled in the United States. There are a lot of pictures and jokes about the similarity of Ron with a representative of the fauna on the Internet. But Ron makes light of this popularity because the actor does not consider these features to be shortcomings.

Ron Perlman began playing in television series in the second half of the 70s, but the first significant work of the actor was the role of Amoukar in the sci-fi film Quest for Fire directed by French filmmaker Jean-Jacques Annaud. Critics appreciated the movie which was nominated for the César Award. The novice actor, Ron Perlman, received the Genie Award nomination from the Academy of Canadian Cinema and Television.

A distinctive feature of the film is that all characters use sounds and signals for communication because primitive people have no articulate speech. Writer Anthony Burgess created primitive versions of French, English and German languages for that purpose. The film shows Pithecanthropus, Neanderthals, and Cro-Magnons who lived in the Paleolithic era in the territory of modern Europe.

In 1986, Jean-Jacques Annaud invited Ron Perlman once again to play the bright character of Salvatore in the historical detective story based on the book "The Name of the Rose" by Umberto Eco. After that, the man of striking appearance was offered the leading role of Vincent in the series Beauty and the Beast. In the fantasy project, Ron co-starred with Linda Hamilton. Perlman brilliantly portrayed the title character and won the Golden Globe Award for Best Actor – Television Series Drama.

For six years, Ron played in episodes of several TV series. The most famous projects are A Stoning in Fulham County, Blind Man's Bluff, Batman: The Animated Series, The Little Mermaid, Highlander: The Series, The Adventures of Huck Finn, Bonkers.

In 1993, Ron Perlman appeared in the full-length movie Cronos directed by Mexican filmmaker Guillermo del Toro. The horror film of the young director won several international movie awards and became a box-office success in the USA, grossing $600 thousand. The unique and appalling appearance of Ron Perlman, who played the title character, contributed to the success of the film in many ways.

In 1995, Ron was lucky to participate in French director Jean-Pierre Jeunet's surrealistic film The City of Lost Children. The American actor portrayed the positive title character of strong man One and had to learn the director’s native language in the process. The film received a nomination at the Cannes Film Festival, and the production designer won the César Award.

Until the end of the 90s, Ron had appeared in several movies of different genres: the western The Magnificent Seven, the comedy Police Academy: Mission to Moscow, the thriller Alien Resurrection.

Eleven years after the first collaboration, Guillermo del Toro invited the actor to a new project entitled Hellboy. The script of the mystical thriller was based on the famous graphic novel by Mike Mignola. Vin Diesel was initially cast in the leading role, but the director saw only Ron Perlman as Hellboy. The movie about a man from hell became an hour of triumph in the career of the actor.

Contrary to expectations, the movie did not become the box office flop, grossed $100 million, and earned the creators the Saturn award for Best Make-Up. Four years later, the sequel Hellboy II: The Golden Army was released, which won the Saturn Award for Best Horror Film and received an Academy Award nomination for Best Makeup.

At the end of the 2000s, the actor appeared in several fantasy TV series such as Sons of Anarchy, Archer, Hand of God, The Blacklist. Ron Perlman has played in mystical, fantasy, historical films. Nowadays, Ron Perlman’s filmography has about 100 movies and TV series.

Ron Perlman is known not only for his unusual appearance but also for his loud, deep, bass voice. Therefore, in addition to the film set, the actor also works at the sound studio. Perlman has done voice-over work for the animated series Mortal Kombat: Defenders of the Realm, Teen Titans, The Batman, Superman: The Animated Series, Afro Samurai, Justice League, Justice League Unlimited, Adventure Time, and The Book of Life.

Ron Perlman tries not to disperse information about his private life in the press and on the Internet. It is known that the actor has been happily married to Opal Stone since 1981.

Despite his formidable appearance, Ron Perlman turned out to be a real romantic. The actor and Opal celebrated the wedding on Valentine's Day. Three years later, his wife gave birth to a daughter, Blake Amanda, and after six years, son Brandon Avery was born.

In the summer of 2016, a new video game, Payday 2, was released, in which Ron voiced Rust, a robber. In 2016, Ron made his debut as a producer in the comedy Pottersville. The actor made his latest appearances in the thriller The Blacklist, the film adaptation of the novel “Fantastic Beasts and Where to Find Them."

In 2017, the movies Asher, The Jesuit, Sergio and Sergei go through the post-production stage. At the end of 2016, Ron Perlman launched a comic election campaign on the Internet and urged viewers to vote for him in the 2020 presidential election. Fans appreciated Ron Perlman's sense of humor, and the video got 400 likes.

Ron Perlman has a net worth of $15 million.