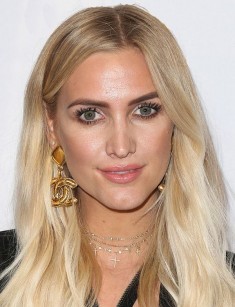 Ashlee Simpson is a pop-singer and actress whose creative career is known in part because of her well-known Jessica Simpson. She has realized herself in the music and cinematography. The critics and fans notice her achievements and success. The singer’s full name is Ashley Nicolle Simpson. The girl was born on the 3rd of October of 1984 in the American State of Texas, in the town Waco. Her father was a Baptist priest, and her mother was a housewife.

Since the age of three, the girl has been fond of dancing and already at the age of eleven, she studied at the School of American Ballet. The teachers noted her creative potential and talent. The young ballerina was so skilled in the results of her studies that she was invited to the ballet school in New York and successfully studied here for three years.

Being a sister of Jessica Simpson, Ashlee moved to Los Angeles together with her family, when Jessica was offered to conclude the contract with the recording company. The family saw great perspectives of the development in the cosmopolitan city.

Ashlee left her ballet studies as she estimated Jessica’s success and saw new opportunities for realization. She tried to catch up with her sister: step by step she began to take part in the commercials and worked as a backup dancer at her senior sister. The actress took part in her sister’s tours and appeared on the stage in front of the numerous audience.

Ashlee's interest in music and show business was increasing with the growth of Jessica’s popularity. Then the tabloids also mentioned Ashlee in their news. Simpson Jr. began to have new interests and got an opportunity to come out of the shadow of her sister having presented herself.

Her sister’s hobbies have formed Ashlee's perception in some way that's why she began to be fond of music. In 2002 the girl released her single "Christmas Past, Present, and Future." This composition attracted the attention of Geffen Records company. They offered the nineteen-year-old singer to conclude the contract. The pop scene has opened the doors to younger Simpson. In 2003 the singer presented the composition "Just let me cry." This song was used as a soundtrack to the picture Freaky Friday in which Lindsay Lohan and Jamie Lee Curtice performed the roles.

The album under the title "Autobiography" became Ashlee’s debut album. The public was enchanted with this disc. The singer at once began to have many fans. In a short time, the disc became platinum three times and brought first musical awards to the singer.

Ashlee became the participant and the winner of different musical awards, and her photos were published in glossy magazines. The composition "La La" got to the first position of the musical charts in different countries all over the world. The video on this song was shown on the popular music channels.

In 2004 Simpson Jr. had her TV-show which was called The Ashlee Simpson Show. As Ashlee had fancy for music and composing new tracks, she used all possible opportunities of the television for the promotion of her creative work. In the TV show, she showed the behind the scenes of the creation of the musical album: the recording process of the composition and her working process on new compositions.

Ashlee Simpson had ups and down in her music career. On the show Saturday Night Live she took part as the invited star. The girl sang the composition under the title "Pieces of Me" without any problems. Though, when she was going to sing the next song, in the studio there again sounded the phonogram of "Pieces of Me." Ashlee was confused and couldn’t find the way out of this situation and ran away from the shooting stage. This situation has undermined her self- confidence.

The singer’s performance at the American soccer match in Miami became her next failure. The singer was singing before the final game between the student's national teams and couldn't delight the audience of 80 thousand cheerleaders. The fans lacked emotions and vivacity that’s why they criticized Ashlee. The most active spectators wrote to the PetitionOnline.com resource, addressing the girl asking the girl to finish her musical career and not to perform on the stage anymore.

In 2005 the artist released her album under the title "I Am Me" which became her revelation about herself. The listeners liked the composition "Boyfriend," but this album didn't bring success to the singer and wasn't sold out.

Ashlee Simpson took her first steps on the television in the shots of her sister’s show Newlyweds. This show narrated the family life of Simpson Sr. and her spouse Nick Lachey. Ashlee fell in love with the camera, and she decided to try herself as an actress. The girl planned to conquer the peaks of the movie industry.

Ashlee had her first experience in the movie when she played the episodic role in the series Malcolm in the Middle. The project has received Golden Globe Awards, and all the actors engaged in this project have attracted the attention of the mass media. The comedy The Hot Chick became the next picture with the participation of Ashlee Simpson. Rob Schneider has performed the leading roles in this picture.

After this movie there followed the shootings in the pictures 7th Heaven and Undiscovered. These projects haven't received enthusiastic feedback from the public and critics, and acting skills of Ashlee turned out to be not so impressive. For the role in the project, Undiscovered Simpson received Golden Raspberry Anti-award in the category For Worst Supporting Actress.

In the movie industry, the beginning actress hasn't achieved the desired success. But Ashlee Simpson hasn't been satisfied with her achievements and has been working hard on herself searching for the appropriated sphere for her self-realization. The love of her fans gave her confidence, and in a short time, the girl delighted her fans with the role in the series CSI: NY. After this episodic image, she received the role in the project Melrose Place. The TV-industry appeared to be favorable to the girl, and she became more confident in her progress.

In 2008 Ashlee Simpson got married to Pete Wentz, the guitar player of the well-known Fall Out Boy band. The actress has taken her husband’s surname in addition to her name and appeared on the stage as Ashlee Simpson Wentz. The couple spent their honeymoon on the islands in the Caribbean Sea. Soon their son Bronx Mowgli-Wentz was born.

The personal life of young people has been ideal and harmonious not for a long time. As it often happens in the unions of creative people, the couple decided to break up. They officially divorced in 2011.

Evan Ross, the son of the singer Diana Ross became new Ashlee’s boyfriend. In 2014 the lovers got married. In this marriage, their daughter Jagger Snow Ross was born.

Even though the journalists and mass media often compare Ashlee to her sister Jessica, the girls have close and warm relations. They appreciate the family. Their father who has changed his job has become Ashlee’s manager.

At present Ashlee Simpson isn't among the most discussed celebrities of show business in the USA. She continues her music career and appears on the television. Occasionally she appears on the pages of glossy magazines and accompanies her sister at secular fashion actions. The singer dedicates her spare time to her family: her husband and children.

Ashlee’s appearance becomes a topic for discussion in the press. Ashlee quite often makes experiments with her style and image. When she had her debut on the stage, she appeared in the image of hot long-haired brunette, and later she experimented with her hairstyle. She changed her hair color from red to blonde and had her hair cut short.

Even more, attention is paid at her facial features. The singer had complexes because of her nose form and size and the fact that she had a crooked nose. With age, she has made up her mind to change this natural form of her nose and has had rhinoplasty what is still discussed by her fans. The fans are sure that the correct ideal forms have made Ashlee less individual.

In 2018 one can observe the changes of Ashlee Simpson’s image and style on her account on Instagram. 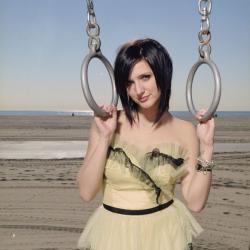