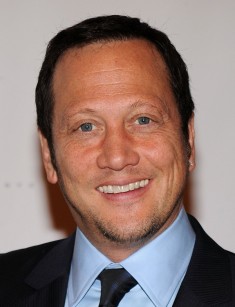 Rob Schneider is an American actor, comedian, scriptwriter, and director. He is an experienced participant of stand-up performances and sketch- show Saturday Night Live. Before the release of the movies The Hot Chick, The Animal and Deuce Bigalow: Male Gigolo on the big screen the actor was known to the audience due to his secondary roles in the movies directed by Adam Sandler.

Rob was born on the eve of All Saints' Day (on the 31st of October, 1963) in the family of the real estate specialist Marvin Schneider and his wife Pilar, who was working as a teacher. Rob became the third child in the family (the actor has an elder brother John and a sister April). Happy parents called their son Rob. The family was living not far from San Francisco in Pacific City.

Rob has shown his comic talents rather early. The charismatic boy was a regular performer at the school concerts. Not only his parents were delighted with his stand-up performances, but all the teachers as well. Each prophesied great future to Schneider. After receiving the certificate about the completion of the secondary education, the actor worked for some time as a host on radio, and in the afternoon, he performed at different occasions in the clubs.

Later the destiny gave to the ambitious young man the opportunity to show himself from the best sides. In 1987 Schneider won the contest of the young comedians of HBO TV channel. The representatives of NBC channel noticed the promising actor and offered him a job of the scriptwriter in the show Saturday Night Live. In 1988 Rob relocated to Los Angeles and began to work on the SNL program. In a couple of months, the talented employee received the promotion and became the actor of the sketch-show.

Schneider had his major performances during the period from 1990 till 1994. During this period Rob got acquainted with the comedians who have greatly influenced his creative career: Adam Sandler, Chris Rock, David Spade, and Chris Farley. Alongside with this with work on television, the guy has performed some episodic roles in the movies and series. In 1994 Rob left his main job and dedicated himself to the acting career.

In the late nineties, Schneider took part in the movies Judge Dredd, Down Periscope, Susan's Plan and Knock Off. Due to the roles in these movies, Rob got acquainted with the elite of cinematography (Jean-Claude Van Damme, Sylvester Stallone, Lauren Holly) and also has finally made sure that the acting profession is a sphere to which he wants to dedicate himself.

The spectators have remembered and have fallen in love with Rob after the release of the Christmas comedy of 1992 under the title Home Alone 2: Lost in New York in which he has received the role of the employee at the hotel. Macaulay Culkin, Joe Pesci, and Tim Curry became Schneider's partners on the movie set.

In 1999 Schneider received the leading role in the picture Deuce Bigalow: Male Gigolo directed by Mike Mitchell. The plot is focused on the life story of the fish tank cleaner Deuce Bigalow who by chance has to master gigolo's profession in his thirty years. Despite the spicy topic shown in the movie, the picture didn't become vulgar and banal as it always happens with American comedies. No doubts that the scriptwriters managed to set high standards of humor and they didn't finish the picture with tasteless jokes.

In 2001 Schneider took part in the movie The Animal. In this picture directed by Luke Greenfield, he received the major role. His character Marvin is an ordinary employee of the police station who dreams of the hero’s glory. Though, Marvin's ordinary mental abilities which don't differ a lot from other people and his disgusting physical shape prevent him from making his dream come true in reality and to become an exemplary man Marvin. Everything changes after the man has had a car accident. Cranky Dr. Wilder saves the character form death.

Professor has replaced the injured internal organs of Marvin for the animals' organs. Due to this, the patient has not only recovered but also has acquired the talents of his donors. Using his new abilities, Marvin finally becomes a real super police-officer. However, together with the heightened reflexes, force and toughness the man has received from the animals the wild instincts which break out at the most inappropriate moments.

In 2002 the comedy The Hot Chick came out on the screen. It’s worth noting that the comedian not only performed the leading role in this picture but also took part in the creation of the script. His old friend – actor Tom Brady has helped him to write the script for this movie. The plot of the film is based on the classic stories about the reincarnation. The first school beauty, the cheerleader and bitch Jessica (Rachel McAdams) appears as the leading female character in this movie. The girl doesn’t have any reasons for sadness: she is always surrounded by the entourage of her faithful friends headed by April (Anna Faris), she has relations with the handsome young man Billy (Matthew Lawrence) and openly mocks at those who are not so lucky in their life as she is.

However, the destiny surprises the girl unexpectedly: because of the fatal mistake she changes bodies with an unsightly pickpocket (Rob Schneider). She finds out with horror that her body has become something unimaginable. Then, Jessica makes up her mind to return her body by all possible means. During the period from 2003 till 2005, the eminent actor enriched his filmography with the pictures 50 First Dates, Around the World in 80 Days and The Longest Yard.

At the end of 2005, the movie Deuce Bigalow: European Gigolo came out on the big screens. The film hasn't met the expectations of the audience and has failed in the hire. Moreover, this movie has received a couple of negative reviews from the eminent American movie critics. In 2007 Schneider took part in the film Big Stan. In this movie, Rob's character is a feeble coward accountant who must be punished for his money frauds and to stay a term in prison. Not to become the object of mockery and not to be beaten the businessman takes lessons of self-defense at the master of martial arts (David Carradine).

Due to this, the man has gained authority among the prisoners. In this movie the future star of the fantasy series Once Upon a Time - Jennifer Morrison has become Schneider's partner on the movie set. Then there followed the shootings in the pictures You Don't Mess with the Zohan, American Crude, Wild Cherry, and American Virgin. In 2010 there was held the premiere of the comedy movie Grown Ups directed by Dennis Dugan in which Rob received one of the leading roles. The movie lovers have enjoyed this light summer movie.

In 2015 there was released one more western comedy under the title The Ridiculous 6. In 2016 the master of transformations has voiced-over the polar bear in the animated series Norm of the North. However, the animated series hasn't delighted the public and has been recognized as the worst animated picture of 2016.

First Rob’s marriage hasn’t lasted for long. The model London King had become his first wife in 1988. The same year she gave birth to his daughter Ellie (Elle) Tanner, and in 1990 the spouses already broke up.

The young and gorgeous Mexican Patricia Azarcoya Arce has changed the personal life of Rob Schneider. The loving couple officially registered their relationship on the 23rd of April, 2011. They have their joint child – Miranda Scarlett who was born on the 16th of November, 2012.

The fact that the spouses have a daughter doesn't influence their social in any way: till present days the lovers attend presentations, visit film displays and of course take part in the charity actions.

Schneider's fans will see their favorite actor in the thriller Life Outside which will come out on the big screen at the end of 2017. The main character of the movie is a person who because of the circumstances has to fight against the evil with his efforts and to support peace on the earth. The destiny tests the young man all the time, giving him new dangerous tasks. Once the man has become a victim of the cruel crime, and after that, he takes the weapon in his arms and starts to fight for justice.

In April of 2017, there was held the world premiere of the picture Sandy Wexler directed by Steven Brill. The comedy tells a story about the life of PR manager of the artists (Adam Sandler). Rob has received the role of the primary character's friend. Besides, the eminent actor is engaged in the shootings of the second season of the Real Rob produced by Netflix company. In this picture, there is no script because it’s shot in live mode and Schneider and his family are the main characters of the series.

Despite the busy working schedule, the actor who is 175 cm tall doesn't forget about his fans. On Instagram, the master of transformations regularly publishes both photos from the movie sets and video cuts from his holidays. It's worth noting that the social networks are not the only sources which tell the fans about the latest news from the actor's life. On different web portals and printing editions, there are often published the materials connected with the creative career of the Hollywood star. 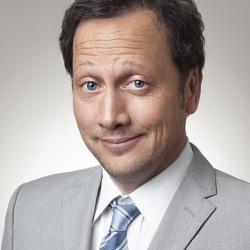