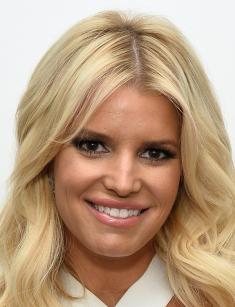 Jessica Simpson is an American singer, actress, television hostess, and designer. Her way to fame began in 1999 with participation in the Dawson's Creek Show. Simpson has released seven studio albums and starred in dozens of television shows. The famous artist created her perfume and released a line of shoes and bags for women. It is worth noting that she designed personal sketches for the collection. The actress is actively involved in philanthropic activities and has many plans for the future.

On July 10, 1980, a psychologist Joe Simpson and his wife, housewife Tina, had a daughter named Jessica. The family lived in the city of Abilene, located in the central part of Texas. When Jess was four years old, she had a younger sister Ashley. The sisters from childhood showed interest in the imaginary world of sounds.

Jessica auditioned for the TV show The Mickey Mouse Club at the age of twelve, but she ultimately was not selected. At age 13, the parents sent their beloved child in the camp. At one of the camp events, talented Jessica sang "I Will Always Love You" by Dolly Parton.

Her vocal impressed the owner of a small recording company who was present at the concert. The man signed a contract with Jessica. However, after a few months, the label went bankrupt, and Simpson's first album wasn't released. And no one knows how Jessica's life would turn out if her records did not get to Tommy Mottola, the co-founder of Columbia Records who took the 16-year-old singer under his wing.

In 1999, the first single "I Wanna Love You Forever", which brought the young singer fame and recognition, was released. The debut album called Sweet Kisses, including the song "I Wanna Love you Forever", reached the point of 200,000 copies sold and went platinum. Jessica was included in the list of 25 Hottest Stars Under 25 according to Teen People magazine. In support of the album, Jessica went on a joint tour with Ricky Martín and the band 98 Degrees.

After the release of the album, record companies and labels began signing contracts with Simpson. The companies realized that just the arising singer was a great investment in the future. And an argument for that was Teen Choice Awards that Jessica received in 2000 in the nomination of Choice Love Song.

A year after that, the disc Irresistible appeared on the shelves of music stores. The singer released a video on the title track "When You Told Me You Loved Me." Listeners also liked the album, and the popular singer was invited to the music show American Music Awards, where Simpson performed "I Wanna Love You Forever." The third album In the Skin was released in 2003. Despite the success of the records, the singer could not be ahead of her main competitors, Christina Aguilera, and Britney Spears, who gained popularity at the same time with her. Jessica was not going to give up and continued to share her songs with fans.

In late 2004, the singer released a collection of Christmas songs which was called Re-Joyce: The Christmas Album. Six months later, Jessica made her debut as an actress. She appeared in the Comedy The Dukes of Hazzard. The singer's single "These Boots Are Made for Walking" became the movie's soundtrack. A year later, the composition received the prestigious People's Choice Award. In 2006, the album called Public Affair was released, and in 2008, the world saw the album Do You Know.

Simpson made her film debut in 2005. Then, the movie The Dukes of Hazzard by Jay Chandrasekhar premiered, starring Seann William Scott, Willie Nelson, Burt Reynolds, and Johnny Knoxville.

The film is focused on the adventures of bosom friends and cousins Bo and Luke. Jessica Simpson got the role of a charming cousin Daisy Duke. No doubt that viewers remembered and loved the blonde in tight mini-shorts. After the debut, the Simpson's career took off. The actress was invited for lead roles. In 2006, Jessica was given the leading role in Greg Coolidge's movie called Employee of the Month.

The plot of the film revolves around the relationship of employees of a shop, where a charming cashier Amy (played by Jessica Simpson) works. The male part of the team is trying to get the attention of the girl. The young people know that their colleague prefers successful men, so once close friends compete with each other, and the ultimate goal is the title of Employee of the Month.

To fulfill the dream, the guys have to choose between friendship and a girl as well as to sacrifice ethical and moral principles. Jessica starred opposite Andy Dick, Dane Cook, and Dax Shepard. The movie was extremely successful, and the box office was two and a half times bigger than the budget.

In 2008, the comedy Blonde Ambition by Scott Marshall appeared on the big screens. It is a story about the difficult life of a provincial Katie (Jessica Simpson). However, the movie was not profitable and grossed only $5 million worldwide (the budget was $10 million). In the same year, Jessica appeared in a high-profile film The Love Guru directed by Marco Schnabel. Despite the starry cast (with the participation of Jessica Alba, Justin Timberlake, and Mike Myers), cinephiles were not satisfied with the movie.

In 2009, Simpson starred in Major Movie Star. In the film by Steve Miner, the famous blonde tried on the image of a member of the US army. Alongside with the roles in full-length films, Jessica also starred in the series. Jessica Simpson's filmography includes such projects as The Twilight Zone, Entourage, and Jessica Simpson.

The first husband of the famous singer was a member of the music band 98 Degrees, Nick Lachey, the one with whom Simpson went on a joint tour. The couple got married in 2002. In August 2003, started the TV reality show Newlyweds: Nick and Jessica produced and shown by the MTV Сhannel. The show was focused on the famous newlyweds.

The show started in August 2003 and lasted four seasons (41 episodes). The last season began on January 26, 2005, and the last episode was shown on March 30, 2005. The show was a huge success and became a phenomenon of pop culture. In 2005, Newlyweds: Nick and Jessica received the People's Choice Award in the category Choice Reality. In December of the same year, Jessica and Nick filed for divorce. They officially divorced in June 2006.

Getting free from the married life, the singer's ex-husband released a video for the song "What's Left of Me," which told the public about their love story with Jessica. Vanessa Minnillo, who portrayed Simpson in the video, later became Nick Lachey's girlfriend. In July 2014, Jessica got married for the second time. Her choice was a retired NFL tight end Eric Johnson, with whom she had been dating for four years. In May 2012, Simpson gave birth to a daughter, Maxwell Drew, and in June 2013 they had a son Ace Knute.

In May 2017, the actress appeared on The Ellen DeGeneres Show. In the program, Jessica not only was talking about the upcoming collection of shoes and bags but also played the game Su Move It Move It, trying on the image of a sumo wrestler.

Besides, in July of this year, Simpson was in the middle of a scandal. The reason was a photo she had published on the eve of her 37th birthday. The famous actress posted on Instagram a picture in which she posed in the pool on an air mattress with a cocktail in her hands. It is remarkable that Jessica was in a bikini and topless. If her fans admired the shapes of twice mom, the media considered such behavior being inappropriate.

It is worth noting that Simpson often appears on the covers of glossy magazines posing naked. Jessica is not ashamed of her body and dares to demonstrate it. We remind that recently the woman found the secret of harmony and was able to lose weight ( she gained the extra pounds after giving birth). Her net worth is $1 billion.