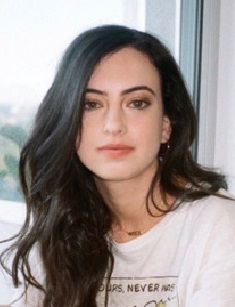 Cazzie David is an American actress and internet celebrity. She is known mostly for her role of Remi in the web series “Eighty-Sixed” (2017) and, besides, her father, Larry David, is a very recognizable actor who has won Primetime Emmy Awards.

Cazzie was born in California in 1994. Her parents are Lawrence Gene David, a comedian, and director, mostly known for his television series “Seinfeld” (1989–1998), and Laurie Ellen David, an environmental activist who released the Academy Award-winning “An Inconvenient Truth” documentary (2006). Cazzie is not the only child in this talented family; she also has a sister, Romy March David, who is two years younger than Cazzie.

Romy had also been interested in the Entertainment Industry, and at present, she is an actress too. Parents’ fields of activity certainly had an impact on Cazzie Laurel, she is developing in the sphere of television like her father, and she is an activist who fights for our nature like her mother.

In 2016, Cazzie got her primary education and went to the Emerson College where she received a bachelor's degree in Writing for TV and Film. Since high school time, Cazzie has been really fond of acting.

Cazzie’s first appearance in the TV series was “Hannah Montana” in 2007 together with her father and younger sister. Cazzie is not only an actress, but she is mostly known for writing the screens. For instance, the comedy web series “Eighty-Sixed” was co-created by Cazzie and she also starred in it. By the way, you can find episodes on YouTube; they are dedicated to the issue of social media and how it affects our lives.

Cazzie plays the role of a self-absorbed misanthrope who often sits in the pajamas and does some self-medication after her breakup. “Eighty-Sixed” is always compared to the “Curb Your Enthusiasm," also a comedy television series, created by Cazzie’s dad, Larry David, and he also starred in it. Much like Larry, Cazzie demonstrates an obstinate refusal to modulate her behavior in response to the people around her. We can see that Cazzie is following the footsteps of her father.

There are not many movies yet, but Cazzie is so young at present, so we wait for her next works! At the beginning of 2019, she already released a pilot to the "Half-Empty" on the Amazon. "Half-Empty" was written by Cazzie David and Elisa Kalani together, and Cazzie starred in this series too. This comedy is about one sardonic person who goes to college and has an incredible imagination which leads to a complicated mix of some social issues. "Half-Empty" is the first television project both for David and Kalani.

Besides her film work, Cazzie is also a Vanity Fair insider; she writes articles on various topics such as how to make your Instagram profile attractive and useful, why fashion pieces are so uncomfortable and so on.

Cazzie has a net worth of $300 Thousand, that she gets mainly from her television work.

Everybody knows that most of the popularity Cazzie received thanks to her father. The actress is not ashamed of that; she even makes jokes about it in her articles for Vanity Fair. She says that having a public Instagram account is really useful for her in getting some new and amusing information. She mostly says thanks to her commentators, from who she found out, for instance, that she is “hot for being Larry David’s daughter” and that her name means penis in the Italian language.

The first person, that kind of made little Cazzie famous, is her father, Larry. Another person is Pete Davidson, with who Cazzie had a relationship. Pete is a recognizable American actor and comedian. Davidson suffers from borderline personality disorder, a type of depression, and he still says that Cazzie was really supportive of him and helped to stay sober. They have been dating for two years, from 2016 to 2018. At the same time, when Pete broke up with Cazzie, the singer Ariana Grande ended her relationships too.

So, shortly after their break-ups Ariana and Pete started dating each other and only after a month they got engaged. There were a lot of rumors about the actual duration of their relationship, and it was found out, that Pete and Cazzie were on a break before the official breakup, and that was the time when Davidson fell for Grande. Right after the announcement about Pete’s new girlfriend, he rather soon got two tattoos dedicated to Ariana: an image of Grande’s black bunny mask that she wears on the cover of her album “Dangerous Woman” and her initials.

When he was with Cazzie David, he got the tattoo of Cazzie’s name too on his arm, which, at it appears, he somehow covered up after their breakup. By the way, Pete and Ariana called their engagement soon, at the end of 2018. Cazzie has reacted on all of this rather calmly. When the news about Ariana and Pete’s engagement was announced, Cazzie posted her photograph on a safari trip in Africa saying “What'd I miss?”. As we see, Cazzie never gives up her sweet sense of humor.

Since Cazzie is such a social media person, of course, there are always a lot of rumors about her personal life. John Mayer, an American musician, has been hosting an Instagram Live talk show named "Current Mood," and in autumn, 2018 he invited Cazzie to his show. They talked about love life a lot, and after that talk show, the rumors about them having some kind of crush on each other appeared. However, this information is unconfirmed, and they are certainly not dating, at least, for now.

We all look at Cazzie’s Instagram images where she shows her luxury late breakfast, her sexy photos in an orange bikini, her famous dad, etc., and lots of us never consider what’s inside. Cazzie described herself with the words “the most anxious, least chill person ever," and if we think deeply, we can understand. If you are a daughter of one of the most popular directors and actors, it must be hard to be in the spotlight all the time since childhood. We guess, it is one of the main reasons to write a book about your life, your hard emotions that you have for so long, and we are really waiting for Cazzie’s “No One Asked for This”!

By the way, Cazzie belongs to the small amount of rather famous personalities who have never posted nudes. Yes, that’s right, we can never find photos of her being naked on the internet and not even some topless pictures on the beach.

Cazzie David is also a beginner in writing, not screens, but books. It was announced that in 2020 she would publish her own first book named "No One Asked for This." That work is supposed to be a funny story based on Cazzie’s experience. She writes with her great sense of humor about neuroses that come together with being super popular and super rich. That’s what Cazzie says about the whole concept of her debut book:

"No one asked to be born into this world, and those people certainly did not ask for this book, but here we are."