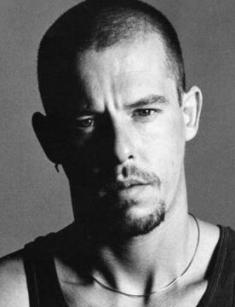 People who have lived difficult lives often amaze the world with their talents. For example, as a child, designer Alexander McQueen was sexually abused by a man. He did not even graduate from school, but became an outstanding avant-garde fashion designer, "a bad boy of British fashion."

Lee Alexander McQueen was born on March 17, 1969, in London. The boy was the youngest of 6 children of Ronald, a taxi driver, and teacher Joyce.

At the age of 9, Alexander was sexually abused by the husband of his older sister, Janet. The man always beat his wife, and one day, he became physically violent with her brother. McQueen did not dare to talk about his experiences, even becoming a famous fashion designer. Janet learned the truth only four years before her brother's death.

In 1985, McQueen dropped out of Rokeby School to work at the tailor house. The parents did not take his son seriously and considered creativity to be his hobby. But young McQueen, who already distinguished himself with outrageous behavior and unconventional view of the world, was not ready to put up with the fate of a taxi driver.

Alexander McQueen first worked at the prestigious studio of Anderson & Sheppard. Then the young man made costumes, including for Prince Charles, at Savile Row. They say that the designer wrote an obscene marker inscription in the lining of a jacket for Prince Charles.

Bobby Hillson, the Head of the Masters course at St Martin's, first noticed the talented young man. Hillson considered his portfolio perfect and encouraged to study at college.

The creative freedom helped McQueen to realize his fullest potential. He shocked the MA Fashion with outrageous collections, the most famous of which is “Jack The Ripper Stalks His Victims." McQueen's collection distinguished itself with skull print dresses, Victorian-era clothing style, and locks of hair, which were sewn into the clothes.

McQueen explained in an interview with Time Out in 1995 that he decided to use hair for the lining, being inspired by Victorian prostitutes who sold hair locks as souvenirs. The designer used his own hair in his early collections.

Isabella Blow, a fashion editor of Tatler magazine, was delighted with McQueen's debut collection. She bought everything, paying £100 for each item. Since then, the fashion expert helped the young designer to pursue his career. Blow used her unique style and contacts to help McQueen to make it into the fashion world.

The bold collections "McQueen's Theatre of Cruelty," "Violence over Scotland" by Alexander McQueen attracted the attention of leading fashion houses. As a result, in 1996, Givenchy offered the young man a post of chief designer. His first couture collection was unsuccessful, McQueen said in an interview with Vogue magazine that the collection was "crap."

In the autumn of 1998, McQueen recovered his glory. The star of his show was model Aimee Mullins who had both of her legs amputated below the knee when she was one year old. The girl strode down the catwalk on intricately carved wooden legs.

A year later, McQueen created the show, where Shalom Harlow walked the runway in a strapless white dress. During the show, two robots sprayed the girl with yellow and black paint. It is assumed that the designer denounced the fashion industry, which turned into a soulless robot, looking only for commercial success.

It was torture for McQueen to work for someone else. He dreamed of changing the idea of Givenchy, but Hubert de Givenchy did not remain aloof. In 2000, the Gucci Group acquired 51% of the company and McQueen's serving as Creative Director.

In the spring of 2001, McQueen released one of the most famous and dramatic collections, named VOSS. There was a glass box in the center of the room, which was similar to the ward of a psychiatric clinic. The inside of the box was unlit, the glass walls appeared as large mirrors, so that the seated audience saw only their own reflection.

Nothing happened for about an hour. McQueen watched the audience, who took their eyes off the box not to look at themselves. The designer called this trick an attempt to “turn the fashion industry back on the people." Finally, models walked the runway, wearing feathers, shells, bandages on their heads.

When the VOSS show began, lights came on inside the enormous glass case. The glass walls fell away, smashing on the ground. They saw a naked woman, writer Michelle Olley, who wore a gas mask and laid on the couch. Moths were flying around. Nick Knight, a fashion photographer, called this collection "one of the best pieces of Fashion Theatre."

McQueen understood that smell characterized the essence of a man, so in 2003, he launched the first Kingdom fragrance for women. The designer wanted that sweet and floral notes grew in intensity, causing a sexual attraction. McQueen dreamed that his perfume would become classic, not depending on fashion and trends. A year later, Kingdom fragrance for men appeared.

In 2006, he founded the McQ brand for young and dynamic men and women. The fashion house works even today, designing not only clothes, but also shoes, bags, scarves, and sunglasses. According to the official website, the brand is now led by Sarah Burton.

In May 2007 McQueen felt that his life was the eternal darkness. The designer found out about the death of Isabella Blow. It took the man time to recover from the shock.

His triumphant return to the runway took place in the autumn of 2009 at Paris Fashion Week, where McQueen presented The Horn of Plenty collection. The designer was accused of misogyny because the oversized scarlet lips of the models made them look like sex dolls.

The final work of McQueen was the unique “Plato's Atlantis” collection of Spring-Summer 2010, inspired by the post-human manifesto. “Plato's Atlantis” first presented Armadillo shoes with a heel of 0.98 ft. (30 cm). The shoe gained popularity thanks to Lady Gaga’s music video (by the way, McQueen's passionate fan) "Bad Romance."

The fantastic collection enchanted not only the fashion community but also McQueen. According to his friends, he had a lot of ideas and waited for the opportunity to proceed to the next step. But fashion designer faced difficulties, which he could not overcome.

Alexander McQueen was openly gay. The fashion designer realized his sexual orientation when he was six years old, and already came out at school. McQueen later told in an interview:

"I was sure of myself and my sexuality, and I've got nothing to hide. I went straight from my mother's womb onto the gay parade."

In 2000, George Forsyth, a documentary film director, began a relationship with McQueen. They celebrated the wedding on the yacht owned by a Gambian prince in Ibiza. However, it was not official because same-sex marriages became legal in Spain only in 2005. Alexander's bridesmaids were model Kate Moss and his muse Annabelle Neilson. The men broke up shortly before McQueen's death.

After Isabella Blow’s suicide, McQueen's mental health deteriorated, and he was diagnosed with depressive disorder. Drugs also affected his health. In May and July 2009, the designer took drug overdoses but was saved. The last straw for McQueen's yearning soul was February 2, 2010, when, his mother Joyce died after a long struggle with cancer. The designer reported on the tragic news on Twitter and wrote on February 7:

"Now, I have to somehow pull myself together."

On the morning of February 11, the housekeeper found Alexander McQueen hanged at his house in London. He left a note saying,

Later it turned out that McQueen had reserved £50,000 of his wealth for his pet dogs so they could live in the lap of luxury. The police stated that the note was not suspicious, but did not confirm that the death was a suicide. The Coroner confirmed on April 28 that McQueen committed suicide. a post-mortem examination found "a significant level of cocaine, sleeping pills, and tranquilizers in the blood samples."

The death of the English fashion designer caused an information explosion. New books were published every month, showing the photos of McQueen’s most successful collections.

One of the most prominent books is the biography “Alexander McQueen: Blood Beneath the Skin” by Andrew Wilson. The writer spoke to McQueen’s friends and relatives to tell the truth about the difficulties of accepting homosexuality, relations with Isabella Blow, and the final years of the designer's life.

In 2018, the documentary film McQueen premiered, which featured interviews with his loved ones, the footage of Alexander’s brothers, sisters, father, and friends.

After the death of McQueen, his brands continue to exist, and new collections are launched nowadays. For example, in 2018, Alexander McQueen and Puma presented bright sneakers and gumshoes, which became a hit of the season.

At the time of Alexander McQueen’s death, he had a net worth of $30 million.