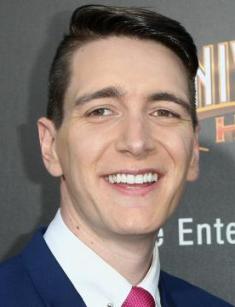 Oliver Phelps is a British actor known for the role of the red-haired twin George Weasley in the screen adaptation of Harry Potter books. The actor appeared in the movie series with his brother, James Phelps. Although there were not so many scenes with their characters, the audience loved the twin tricksters with all their hearts.

Oliver Martyn John Phelps was born in a provincial town, Sutton Coldfield, not far from Birmingham. He is 13 minutes older than James; the twins became the only children in the family of Susan Spare and Martyn Phelps.

The boys were fond of theater and participated in school plays. They went to the same school but different classes, so that they would not fool around during lessons.

One day, the mother told the kids about the auditions for Harry Potter and the Philosopher’s Stone in Leeds, 200 miles from their town. The brothers were inspired; they gladly read Joanne Rowling’s books. As soon as Oliver and James saw how many candidates came, they wanted to return home immediately, but the parents insisted they should give it a try; the children read some extracts from the script. Several days later, a phone call came: the Phelps brothers were given the parts.

It is impossible to describe how happy they were. The same day, the twins shared the news at their school, but few people believed. When the boys had their hair dyed red, all doubts were left behind. Their natural color is brown.

Oliver started working on the Harry Potter saga when he was 14; the twins appeared in all parts of the movie series and spent ten years on it, growing up with their character. The awkward teenagers turned into tall guys: 6.27 feet (191 cm.).

Journalists often asked the young actor if he bore any resemblance to his character, George. He would reply that he also liked to have a chat; Oliver was also as friendly and ever-busy as the Weasley twin.

Some people thought that the brothers were played by the same actor, and computer technologies were used. In fact, Oliver and James can be easily told apart. Oliver has a dorsal hump; the corners of his eyes are down; the young man has a mole on his neck and smiles openly.

After the first part of Harry Potter was premiered, Oliver and his sibling became truly famous; many fan clubs were founded, and the whole world was crazy about the story. It was one of the top-grossing projects and received nominations for the Academy Awards, BAFTA, and the Saturn Award. All successive parts were more popular than the previous ones. Oliver believes that the last movie, Harry Potter and the Deathly Hallows – Part 2, is the most exciting one.

As the actor confessed in his interviews, it was also the most challenging work for him, with lots of action, dynamics, and excessive emotional scenes. He had to empty himself to play the moments of the last battle – Oliver was used to making people laugh, not cry.

In 2010, Phelps joined the cast of the movie Latin Quarter about the painter Pablo Picasso, but it has not been released. Besides, the young man participated in the series Kingdom and several short movies.

In 2015, Oliver Phelps married Katy Humpage; they had been dating since 2008. The wedding ceremony took place on July 4 at St. Mary’s Priory Church, Deerhurst. In 2016, the spouses’ child was born; whether it is a girl or a boy is still unknown.

The man does not like to share the details of his personal life; there are no photos of his wife on his Instagram page. Instead, one can see many pcitures of travels and sports events.

The Phelps brothers have never been rivals on the stage; however, they are rivals in golf. Oliver loves the game so much that he considered becoming a professional athlete.

When the artist has some free time, he likes to play video games and attend soccer matches. Oliver and his grandfather support Aston Villa; his father and brother are fans of Birmingham City.

The artist does charity work and supports the Royal National Lifeboat Institution. Besides, he used to help “the UK’s kindest boy”, Harry Moseley, who had a brain tumor. The child was fighting the disease for four years and also tried to help others, making bracelets and visiting events about oncology. Moseley earned £85 000 thanks to his activities and donated them to other patients; he died in 2011.

The artist travels a lot; one can read his stories about various places on his own website JOP World.

In October 2017, the twins attended a Harry Potter exhibition in Madrid; they also took part in Steel City Comic Con 2017.

Today, the short movie 7 days The Story of “Blind Dave” Heeley with the actor is coming soon; James will also appear there.