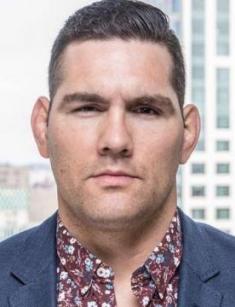 Chris Weidman is an American mixed martial artist and athlete performing in the middleweight division. He collaborates with ММА and UFC. Fans also know him as “All-American”.

Christopher Weidman was born on June 17, 1984, in Baldwin, New York. The boy was the second child in the family. Along with his elder brother, Chris took an interest in martial arts and reached a lot soon.

As a school student, the boy became the champion of his home state and Nassau County. Experts called Weidman one of the most promising Greco-Roman and freestyle wrestlers in the United States.

When Chris entered college, he did not quit his favorite sports. Weidman studied at Hofstra University and became the first junior student who earned the champion title in the state. Besides, the young man’s academic performance was pretty good; he finished the university and became a Bachelor of Psychology.

Chris met Gabriel Toribio at the university and received an invitation to the Brazilian Jiu-Jitsu Academy as an instructor. Three months later, the young sportsman won The East Coast Grappler 's Quest and Absolute Division; he remained the leader throughout 13 matches.

Further on, Weidman started earning a Master’s degree in his university. The work and studies did not give him much time left for Jiu-Jitsu. Nevertheless, the man got a black belt in this sport.

The young sportsman dreamed of performing in the Olympic Games, but he failed to get into the national team. It was the moment to choose whether to continue the Olympic preparations or switch to MMA. Weidman preferred the second option and joined the Ray Longo’s MMA Academy. Soon, Chris succeeded at the ADCC qualifying matches and began to fight for the champion’s title. He lost to André Galvão in the quarterfinals.

In 2009, the athlete performed at Combat and successfully faced Reubem Lopes. Weidman also won the battle against Michael Stewart two months later, just like the next match against Uriah Hall. The victory over Valdir Araujo brought the long-awaited ROC Champion title.

UFC noticed the young talent and offered him to collaborate; the debut match against Alessio Sakara took place in 2011. Despite his trauma, Sakara won. Further on, Chris fought against Jesse Bongfeldt, Tom Lawlor, Demian Maia, and Mark Muñoz; all these matches were victorious. However, the athlete failed to meet Tim Boetsch because of an injury and Hurricane Sandy. He needed a rehabilitation period.

In 2013, Weidman came back and took Anderson Silva’s champion title in the middleweight division. Chris interrupted the Brazilian’s seven-year triumph performance and became the only athlete who knocked out Silva in ММА.

The following matches against Vitor Belfort and Lyoto Machida who replaced him did not take place on schedule: Weidman’s old knee trauma forced him to put it off. While Chris defeated Machida later, the fights against Belfort were postponed several times, again, because of the injuries. The event happened in spring 2015; it was a spectacular night. Eventually, All-American won by the technical knockdown.

The winter of the same year was less fortunate: Weidman had to endure his first major loss to Luke Rockhold, and the rematch could not be held because of the herniated disk. Chris was supposed to fight against Rockhold in 2016, but his health condition did not allow that. That year, Michael Bisping became the champion.

The loss to Yoel Romero followed. In 2017, Weidman fought against Gegard Mousasi and lost his balance after the Dutch athlete’s two hits. Mousasi gained the victory by the technical knockdown. People and athletes were passionately discussing Weidman’s failure. Some of them tried to catch Gegard using a prohibited method on purpose; in this case, Weidman could win by his opponent’s disqualification.

Chris Weidman is a happy father of three kids. He met his would-be wife, Marivi, in his youth: she was his best friend’s sister. The young people began to date as students and never parted.

The family is significant for the athlete; he regularly posts pictures with his wife and children on Instagram. As Chris says in his interviews, his personal life is happy and full of genuine love, despite some family life problems.

Weidman was one of those who suffered from Hurricane Sandy in 2012. The man experienced the ordeals that ordinary Americans faced and helped restore residential properties along with the non-profit organization Staten Strong.

In 2018, Chris Weidman faced Jacaré Souza; thousands of fans and viewers watched it on TV.

Rumors had it that the winner would become the reserve athlete in the next match for the champion title between Kelvin Gastelum and Robert Whittaker. Although Chris’s will to win was strong, he failed. Weidman congratulated his opponent and fans on Instagram.

Four losses in five matches that were held before November 2018 motivated the sportsman to prepare for future meetings and work hard. He is going to prove he is worthy of new prestigious titles.