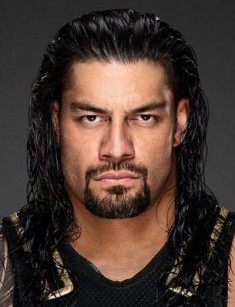 Roman Reigns is one of the most renowned wrestlers in the USA, the 2015 Royal Rumble winner. He began his sports career in American football but did not succeed. However, as a wrestler, he came off with flying colors from the very beginning.

Leati Joseph "Joe" Anoaʻi is the real name of the athlete who was born in Pensacola, Florida, on May 25, 1985. He has mixed ancestry. His mother is Italian and his father, Sika Anoaʻi, is a Samoan professional wrestler.

The family had two children, and brother Matthew also chose a career in martial arts. Besides, Joe is a relative of such famous athletes as The Tonga Kid, Rikishi and Umaga.

Since childhood, the boy has wrestled and played American football. Outstanding results helped him enroll in the Georgia Institute of Technology, where he was also a member of the football team.

After graduation from the Institute, Anoaʻi went in for professional sports. Joe took part in the matches of 2 teams of the National League but went undrafted, and later, he played for the Edmonton Eskimos for one season and decided to change football to wrestling.

In 2010, Joseph was offered a contract with WWE. He transferred from the developmental territory Florida Championship Wrestling to The Shield and began to perform using the ring name Roman Leakee. In September of the same year, the fighter debuted in a loss to Richie Steamboat. It was followed by two more losses before he gained revenge over Fahd Rakman. The rival was an experienced fighter, but the young wrestler had already suffered defeats and was not going to lose again. h

At first, Roman participated only in tag team matches, and in 2012 he could fight in a single competition. The 2011 Grand Royal ended with a loss. Although Leakee teamed with strong Donny Marlow and they showed a good performance, the fighters could not win because of the lack of experience. After the defeat, their team fell apart.

In February, the athlete defeated Dean Ambrose and Seth Rollins in a triple threat match to become the contender to the FCW Florida Heavyweight Championship but lost in the next fight. However, he came close to winning, which was a great achievement for the fighter with a brief experience.

In October 2012, the athlete took the ring name Roman Reigns and made his debut in the WWE NXT. In The Shield, he fought alongside Ambrose and Rollins who vowed to rally against "injustice," emerging during tag team matches when they thought that an athlete took advantage dishonestly.

According to the teammates, the fighters were a kind of "special forces," and they planned to have real police fiberglass shields. Before the debut fight, the athletes changed their mind, deciding that bulky stuff would hamper them.

“And we threw them away, get in the ring, assaulted Ryback and broke the table,” Reigns recalled in an interview.

The team made its debut at Survivor Series. However, they failed to create an image of independent "law enforcement forces." On the contrary, people began immediately to accuse the team saying that they allegedly fought for those athletes who paid them.

They helped the wrestler CM Punk to win several times, which finally cemented their reputation as Punk’s supporters. The wrestlers denied any connection with him, but they always emerged during his battles.

Punk’s rivals agreed to teach the warriors a lesson. Ryback gathered like-minded people and called The Shield out in a straight fight, but they could not gain revenge. The group continued to help their favorite athlete, and colleagues held a grudge.

During the Royal Rumble match, The Shield, led by Reigns, launched a brazen attempt. CM Punk fought for the champion title against Dwayne Johnson, nicknamed The Rock. The situation went poorly, but suddenly the lights went out in the ring. In the dark, unknown people attacked the Rock, which allowed Punk to hold him. They did not see the attackers, but these were likely The Shield fighters. The judges annulled the results and forced the athletes to fight again.

In 2013, Reigns’s team won the PPV, Extreme Rules. Enjoying victories, The Shield defeated new rivals such as The Undertaker, John Cena. After the championship, they became working for a new team and won the main title at the Night of Champions. They lost the next two battles to the Rhodes, and the group began to disintegrate.

In June 2014, Reigns went in the ring on Raw on his own, having chosen new background music for the fight and said that he was claiming the title. Later, Ambrose did the same, and it became evident to the fans that The Shield ceased to exist, although at that time it was announced that it was a temporary measure. Later, the athletes teamed to fight against AJ Styles and won a brilliant victory, but then they often competed separately.

The group reunited three years later. Roman was disqualified in the Intercontinental Championship match, and his former colleagues came to his dressing room after the fight and promised to support him. In October, The Shield returned and defeated the team of The Miz, Curtis Axel, and Cesaro.

In 2015, Reigns fought at the Greatest Royal Rumble. At the championship, held in Saudi Arabia, he was a WWE Universal Championship title-challenger. His rival was Brock Lesnar. At the end of the spectacular fight, Roman broke the ring net with a harpoon and fell off the ring together with Lesnar. The jury declared the opponent the winner, but a little later, Reigns managed to take revenge and take the champion title from Brock.

In 2014, Reigns married his longtime girlfriend, Galina Becker. On his official Instagram page, the wrestler posted beautiful photos of the wedding on the tropical coast. They raise a daughter, Joelle. Roman has little time for his personal life, but he tries to devote every free minute to his family.

The athlete’s height is 191 cm, the weight is 120 kg. At the beginning of his career, Reigns wore black shorts, then changed them to custom made clothes, which was similar to the uniform of Special Forces soldiers. Roman prefers long unfastened hair, and he has a large tattoo in the shape of a Samoan tribal pattern on his right shoulder. Reigns is Catholic and always puts on a cross before the fight.

The wrestler’s idol is the Canadian-American fighter, Bret Hart.

In 2018, on RAW the athlete made a public statement that he relinquished the title due to a serious illness. Reigns revealed that his leukemia had returned after 11 years of battling it and was in remission; thus he felt worse.

After telling the audience and colleagues the sad news, he hugged teammates, Dean Ambrose, and Seth Rollins, and left the championship title belt in the ring. The friends could barely choke back their tears, but Roman urged not to shed tears over him and said that he was optimistic and it was not the end of his sports career. 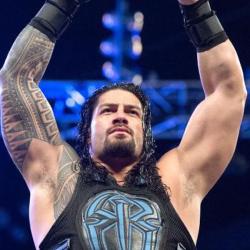