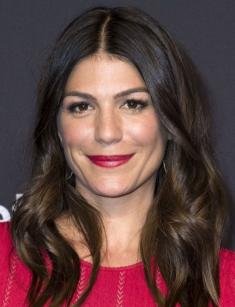 Genevieve Padalecki is the wife of the Supernatural star Jared Padalecki; she is an exemplary mother and happy woman. She has built an acting career and enjoys relaxing with her family now; the actress has no plans to return to a movie set. Instead, Genevieve prefers her mobile phone and vlogging to large cameras.

Jennifer Nicole Cortese was born on January 8, 1981, in San Francisco, California. She was the oldest child in the family and had a sister, Sarah, and two brothers, Johnny and Ben. The woman has Italian and Flemish roots from her father, and her mother came from France.

Genevieve gave many facts about her childhood in the video 10 Things You Didn’t Know About Me on her personal channel nowandgen. The actress told her audience that she saw Arnold Schwarzenegger in the comedy Kindergarten Cop at seven; she was so impressed that she wrote the actor a letter. The girl never received an answer, though.

Genevieve transferred several times and attended three schools. When she turned 13, the family moved to Whitefish; later, the Corteses settled in Sun Valley, Idaho. The young woman graduated from a private middle school in California.

Jennifer admired Mia Hamm, the soccer player who broke all possible records among women and men. Today, Genevieve dreams of following in her icon’s footsteps and become a professional soccer player. She could not do it earlier. At the beginning of the 2000s, the girl’s grandmother made her choose arts. The future celebrity entered the Tisch School of the Arts, New York University and received a BA in English and a BFA degree in drama. Simultaneously, the young talent attended the Stella Adler Studio of Acting.

At the age of 21, the artist changed her name to a more exotic “Genevieve” and tried herself at the theater. She appeared in episodic roles in A Midsummer Night's Dream by William Shakespeare, One Flew Over the Cuckoo's Nest based on Ken Kesey’s novel, Crimes of the Heart, and the musical Joseph and the Amazing Technicolor Dreamcoat.

The young woman debuted on the big screen in 2004 in the thriller Death Valley. It is a story about four bikers; they are exhausted after a party and decide to spend the night in a sand quarry. In the middle of the night, they realize it is the worst place they could choose: cutthroats who have just gained new stolen guns are looking for a soft-skinned target. Genevieve played Amber, a biker’s girlfriend.

The series The Dead Zone based on Stephen King’s novel under the same title became the actress’s next project. Cortese appeared in the episode “Still Life” and personified Chloe Greeg (the real name is Laura Tierney), a muse for an eremite artist who presented her portrayed after a long break. The woman looks just like the master’s deceased daughter. Little by little, the secrets about the artist’s relation to his muse and the real cause of the daughter’s death are revealed.

2005 brought the movie Kids in America. It is a story about the teenagers who struggle against discrimination from the school administration. The universal themes, such as freedom of speech and LGBT people’s rights, are raised. The actress played one of the protesting students, a cheerleader.

The same year, ABC Family channel launched the series Wildfire which brought Genevieve the long-awaited fame. The actress’s character, Kris Furillo, is a teenager who steals a car and goes to a penal colony.

When the young woman is released, she is eager to turn over a new leaf in her life. She gets hired as a jockey at a rancho and meets new outstanding people. The series was aired in 2005-2008 and lasted for four seasons. To manage her role, Genevieve took riding classes.

Wildfire did not become a road-opener to Hollywood. The next years were marked with insignificant projects: Bickford Shmeckler's Cool Ideas (2006) and Salted Nuts (2007). However, in 2008, the artist got a role of Ruby in the series Supernatural.

The main characters, Dean (Jensen Ackles) and Sam Winchester (Jared Padalecki), meet Ruby in the third season (Katie Cassidy played her at that time). She often helps the brothers solve problems: the woman kills the Seven Deadly Sins in the episode “The Magnificent Seven”, promises to save Dean from going to Hell, and removes a witch’s curse from the Winchesters. However, she does that to earn the brothers’ trust and open Lucifer’s Cage with their assistance.

Genevieve debuted in this role in the episode “Lazarus Rising”. After Dean’s death, Sam and Ruby have a romance; the demon helps the man overcome the sense of loss. Although Ruby has feelings for Sam, it does not prevent her from achieving her goal. It happens in the episode “Lucifer Rising”: the men unwillingly open the devil’s cage. Later, the brothers kill Ruby; it was Genevieve who insisted on this plot twist because she felt that this character had reached her limits.

In the sixth season, Cortese came back to the series for a while and had a cameo role: Jared Padalecki’s wife in the episode “The French Mistake”. As the story runs, Dean and Sam find themselves in a parallel universe where they are the stars of the series Supernatural. As it turns out, one of their enemies, Ruby, is Sam’s wife.

In 2012, the actress played the lead role in the movie Hated about a punk group. Since that time, Genevieve has stopped working on movies and concentrated on her family.

Jared and Genevieve met at the movie set of Supernatural in 2007. The actors felt attracted to each other and started dating. Cortese asked the future husband to keep their relationship secret for a while so that the series crew would not turn the story into their personal drama in case of a break-up.

The romance turned out to be happy. In October 2009, Jared proposed to his beloved woman in The Metropolitan Museum of Art, near Joan of Arc by Jules Bastien-Lepage: they both loved this painting. In January 2010, the couple announced they were going to marry officially.

The wedding took place on February 27, 2010, in Sun Valley, Idaho. The photos from the ceremony were somehow similar to the cartoon Beauty and the Beast. Due to his tallness (193 cm.), Jared got a nickname “elk”; Genevieve, who was wearing a puffy dress, looked like a princess. The woman’s height is 163 cm., and her weight is 47 kg.

Nowadays, the woman is focused on her family: she brings up three children and supports her talented husband. Besides, she has a vlog on YouTube; the channel celebrated its anniversary on June 29, 2018. Genevieve presents life hacks for busy women, teaches yoga and fitness, and recommends books.

The actress shares the news on her social network pages: she gives recipes on Twitter and demonstrates her excellent shape in a swimsuit on Instagram. Overall, her loving family appears in her posts most often. 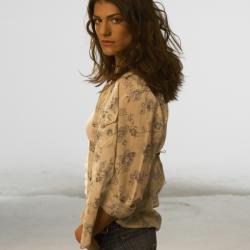