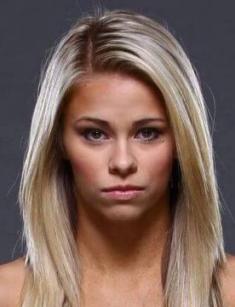 Paige VanZant is a UFC mixed martial artist who used to compete in the Strawweight category and then switched to Flyweight. She is a media personality and often appears in commercials. The successful MMA career became a pleasant surprise for the woman.

Paige Michelle Vanderford was born on March 26, 1994, in Oregon, into an ordinary American family. The parents were loving and supporting; the girl liked to dance.

However, it was difficult for young Paige to find a common language with her peers, perhaps, because of her unusual look. Besides, classmates laughed at her second name, Sletten, and she changed it to the pseudonym VanZant.

Hatred led to complexes; Paige felt lonely and stressed. Bullies were throwing garbage at her, and the girl was afraid to go to the canteen: she would lock herself in a toilet stall, take out her home-made food, and have a bite. The future athlete dreamed of making friends with someone and acceptance; her teenage naivety led to the tragedy one day.

14-year-old Paige was invited to a school party; it seemed to be a good opportunity to change her reputation and blend in. However, the compliant girl was made drunk and raped; she could not do anything. It was severe emotional trauma. Paige did not dare to tell her parents the truth: she was afraid of their reaction. The rumors that VanZant had group sex voluntarily were spread, and bullying got even more painful. Paige was so desperate that almost committed suicide.

The young woman found comfort in sports: martial arts helped her overcome her fears and complexes and restored her self-confidence. The father, who liked UFC and used to be a wrestler, encouraged her daughter to train, and Paige went to her first class in 2009. She learned how to protect herself while classmates took guns and bladed weapons at school.

Soon, VanZant entered a culinary college and combined her studies with training. Three years later, the athlete had her first professional victory over Jordan Nicole Gaza. Overall, she had eleven meetings and seven victories.

VanZant defeated Amber Stautzenberger in 2012; the jury’s decision was unanimous. Although Tecia Torres took the victory in 2013, the battle against Courtney Himes was favorable for Paige and ended by the submission. In 2014, VanZant proved to be stronger than Kailin Curran with a technical knockdown.

2015 brought the victories over Felice Herrig and Alex Chambers but Rose Namajunas crashed VanZant in December. The next year, the woman surpassed Bec Rawlings and lost to Michelle Waterson. In 2018, the jury gave the victory to Paige’s opponent Jessica-Rose Clark.

Today, the athlete is actively engaged in mixed martial arts. However, the old interest in dances still lingers: Paige opens practices and pre-battle meetings with little shows. The woman feels positive about upcoming events but treats MMA as something temporary: family is more significant to her.

Although the athlete had to face violence, she found enough courage to remain an open person. One can read what she has been through in her autobiography Rise: Surviving the Fight of My Life (2018).

Many men liked the pretty blonde. In 2014, she dated the fighter Sinjen Smith in 2014 and started to see Cody Garbrandt in 2015. The woman mentioned she had been abused in a relationship but did not reveal any names.

Today, the fighter and artist VanZant is happy with Austin Vanderford; the couple married in October 2018. Although career is still significant for the woman, she is thinking about children now.

As a media person, Paige remains a simple American girl. In 2016, she participated in the popular TV project Dancing with the Stars.

Fans can follow the athlete’s life on her personal Instagram page. She shares pictures in a swimsuit, photos from practice and with her husband. Paige likes to listen to music and watch series. Her height is 5.35 feet (163 cm.); her weight is 123.46 lbs. (56 kg.).

Following the autobiography release, VanZant began to talk about violence against women openly. She feels inspired by the #MeToo movement and supports those who had to face the same situation as she had.

The athlete told the BBC about her eating disorder: she had to comply with the UFC standards and lose weight, which resulted in health issues. Thus, Paige decided to change the division.

Nowadays, the woman continues to perform at the Ultimate Fighting Championship. She has not earned significant titles yet, but fans believe that their favorite will receive some soon.