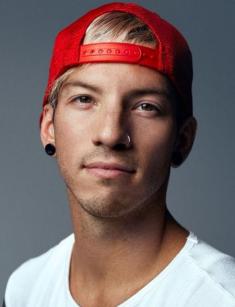 Josh Dun is a talented American musician and the drummer of the popular music duo Twenty One Pilots. He became globally famous for his skillful playing. Josh Dun and the vocalist Tyler Joseph have presented several sensational studio albums, such as Blurryface and Vessel.

Joshua William Dun was born on June 18, 1988, in Columbus, Ohio. His mother, Laura Lee McCollum, was a social worker, and the father, William Earl "Bill" Dun, worked as a physical therapy assistant. Josh has two sisters, Ashley and Abigail, and a brother, Jordan.

Josh was interested in music from early childhood and learned how to play the trumpet. Later, he switched to the drums: the young man learned on his own, without professional training. The parents gave strict instructions related to the music that their son should listen; thus, Dun often sought advice in a local music store.

Josh got hired in a guitar store and worked there for three years. In March 2010, the young man debuted as a drummer in the group House of Heroes: its member Colin Rigsby wanted a time-out to spend more time with his family. Josh participated in the live tour of House of Heroes until October 2010 when Colin came back.

In 2011, Dun listened to the original demo of the group and went to the show of Twenty One Pilots: the then drummer Chris Salih invited him. Josh was impressed by the trio’s concert. He made acquaintance with the vocalist Tyler Joseph; soon, the young men started hanging out together and made good friends.

It was a significant moment in Dun’s life that changed everything. Tyler and Josh like to make up jokes about how they first met: looking for someone on Tinder, selling a car on eBay, and even a train crash where all passengers except for them died.

The same year, Chris Salih and Nick Thomas left the group because of the busy schedule; Dun quitted his job at a guitar store to play with Joseph. They performed one song before the police canceled the event. Since that time, Josh has been the permanent drummer of Twenty One Pilots.

On July 8, 2011, the group presented the second album, Regional at Best. In April 2012, the duet signed a contract with the prestigious company Fueled by Ramen, the affiliated firm of Atlantic Records. The third album, Vessel, came out on January 8, 2013, and found much appreciation among people.

On May 17, 2015, two days before the schedule, the fourth album, Blurryface, was released. This work topped Billboard Top 200 Albums. Two singles, “Stressed Out” (the soundtrack for the fantastic movie Suicide Squad) and “Ride” took the second and the fifth positions in Billboard Hot 100.

Three years later, on October 5, 2018, Twenty One Pilots pleased their fans with the fifth studio album Trench that consisted of 14 compositions and continued the ideas of Blurryface.

In 2017, the band won their first Grammy Awards for Best Pop Duo/Group Performance. The men took off their pants on the stage and explained that they used to watch the ceremony wearing only underpants; it was before they became famous. They agreed they would appear on the stage without pants if they won Grammy.

Joshua’s family is religious. According to the group, they will never use their music to spread the religion, but Christian motives manifest themselves in some works.

The drummer has been dating the actress and singer Debby Ryan since May 2013.

According to some sources, the musician capital is about $10 million.

Dun has a tattoo picturing a tree on his right arm: it is the symbol of his faith. However, the man prefers to talk about the meaning of his tattoos only in person; he does not want it to be shared on the Internet.

Both Josh Dun and Tyler Joseph have the tattoos with the “X” symbol: it illustrates the loyalty of fans from their native town, Columbus. The musicians had these tattoos created right on the stage: it happened on April 26, 2013, during the Lifestyle Communities Pavilion concert.

The drummer likes to experiment with his hair color and style. He often shares some facts from his personal life and the news about the group on his Twitter page.

On December 23, 2018, Josh Dun and Debby Ryan announced their engagement and posted a photo on Instagram. The musician proposed to his beloved one in a tree house in New Zealand.

Nowadays, Twenty One Pilots is supporting the fifth album in “The Bandito Tour". The first show took place on October 16, 2018, at Bridgestone Arena in Nashville, Tennessee. The tour will finish in March 2019.