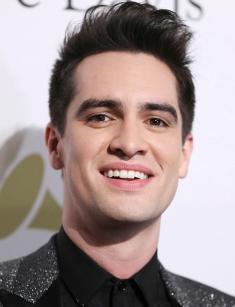 Brendon Urie with glassesBrendon Urie is an American singer, musician and songwriter known as the lead singer of the band "Panic! At the Disco"."He is the only original member, who remains in the team after its formation after years. Urie works in the music industry since 2004, his great vocal range has 4 octaves.

Brendon Boyd Urie was born on April 12, 1987, in St. George, Utah, in the family of Grace and Boyd. Brendon is the youngest of five children. He received special attention from his parents. His family moved to Las Vegas, Nevada when the child was two years old. He grew up in a Mormon family but left the faith at the age of 17.

The boy attended Palo Verde High School in Las Vegas. He met the future bassist of "Panic! At the Disco" Brent Wilson in his guitar class.

At the age of 12, Brendon was diagnosed with attention deficit disorder. The boy was inactive for almost two years and suffered bullying at school because of medication. Urie worked at Tropical Smoothie Cafe to pay the rent for the premises for music rehearsals. As a child, he was fond of groups Scorpions, Queen and performed their songs.

Brendon's music biography began in his school years when he and guitarist Brent Wilson formed the band "Panic! At the Disco." Initially, Ryan Ross was the lead singer of the band but Urie soon replaced the guy, as his vocal abilities were more impressive. Originally, "Panic! At the Disco" was a cover band that performed the songs "Blink-182".

Brendon Urie and his band "Panic! At the Disco" released their debut studio album in 2005. The album "A Fever You Can't Sweat Out" had good commercial success. In the lyrics, the musicians raised such topics as adultery, mental health and alcoholism. The track "I Write Sins Not Tragedies" had enormous success and took the 7th place in the list "Hot 100" in the US. It was in the music charts of Australia, New Zealand, Belgium and the UK.

In 2008, the band released their second album "Pretty Odd." Although it was met with mixed reviews, it was a big hit, taking the 2nd place in the American "Billboard 200" chart and the UK chart album. The album "Pretty Odd" included such singles as " Mad As Rabbits" and "Northern Downpour."

After three years "Panic! At the Disco" released their third album «Vices & Virtues," which was commercially successful and reached the 7th position in the American "Billboard 200". It was on the charts of other countries. The group wrote a soundtrack and released a video "New Perspective" next year, which refers to the comedy horror film Jennifer's Body, in which Megan Fox, Amanda Seyfried starred.

The team's next album "Too Weird to Live, Too Rare to Die!", which was released in 2013, had a huge success and reached the second position in the American «Billboard 200». Brendon sang in front of Barack Obama, Billy Joel when Billy Joel received the Kennedy Center Honors for his influence on American culture the same year.

In July 2014, Brendon won "Best Vocalist" at the Alternative Press Music Awards. In 2015, the band's founder, drummer Spencer Smith left the band and the bassist Dallon Weekes, who had been in the band since 2009, began working with the band only during the tour. As a result, there was only Brendon Urie in the band "Panic! At the Disco", who continued to work on the project alone.

In 2016, the group released the disc "Death of a Bachelor," which had a debut at the first position in the American" Billboard 200". It was their first work, which reached such an honorable position. The album was nominated for a Grammy Awards for the best rock album. The sixth studio album "Pray for the Wicked" was released in 2018, received positive reviews from listeners and music critics and took the 1st place in the American "Billboard 200" chart.

Brendon Urie is married to longtime girlfriend Sarah Orzechowski. He got engaged in September 2011. The wedding took place on April 27, 2013. They are a happy, harmonious couple, who are satisfied with their relationship. Urie is very stable in personal relationships. The singer spends great free time with his wife, you can see on his profile on "Instagram," in which he puts a photo from his personal life. The couple has no children.

At the same time, Brendon does not hide his orientation. He made a coming out in an interview as a pansexual in June 2018.

"I have a wife and I love her very much but I have nothing against men because I like a man first of all, not his gender. Yes, I think you could call me pansexual because I don't care."

He also added that he likes only good people because he sees their heart, not gender and sexuality. Brendon mentioned that he had never had any difficult feelings about reconciling with his sexuality.

Urie loves to read books in his spare time and spend time with his pets. Their names are Kitty and Meyo. Brendon is 5,7 (174 cm) tall. He weighs 149 lbs (68 kg). The singer has a lot of tattoos, the number of which increases from year to year.

Fans love Brendon for many experiments with hair and clothing style (he can quickly appear on heels in a public place or take a picture in women's red boots). Urie communicates with participants of another famous youth music collective "Twenty One Pilots" closely– Tyler Joseph and Joshua Dun.

Now the singer and songwriter together with his band prepare for a large-scale tour of the United States, England and Europe in support of the release of the sixth studio album "Pray for the Wicked." Brendon Urie who has a net worth of $8 million.

The first concert takes place on January 10, 2019, in Buffalo, New York. The tour will last until the summer. The last performance will take place on June 21 in Dover, Delaware. In general, "Panic! At the Disco" will give 42 concerts, many tickets of which are already sold out.