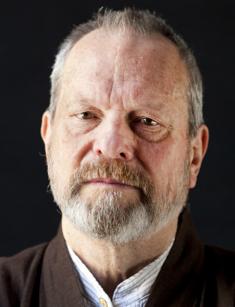 Critics again talked about the American-British director, screenwriter, producer and actor, Terry Gilliam after a 5-year break. His touching and incomprehensible film The Man Who Killed Don Quixote was released in 2018, after the birth of the idea, made a lot of noise at the Cannes Film Festival and, despite the different reviews, attracted crowds of fans.

This tragicomedy was a new immersion in the chaotic world of human fantasies, which surprised the viewer with subtle English humor and an unexpected ending once again.

Terrence Vance Gilliam was born on November 22, 1940, in the American city of Minneapolis, Minnesota. His father James Hall Gilliam was a traveling salesman for Folgers and then turned into a carpenter. In 1952, the family together with three children moved to California, in a suburb of Los Angeles called Panorama City.

The boy went to Birmingham High School, where he was soon a class president. Terry was interested in drawing and gave high hopes as an artist, raised on classic American cartoons, among which were Treasure Island and Pinocchio.

In high school, the young man read the satirical magazine Mad enthusiastically and was admired by the cartoons and parodies created by Dean Martin and Antonio Prohías. This publication influenced the worldview of Terry and he became a skeptic and a rebel, however, the chosen king of the prom.

He graduated from Occidental College in 1962 with a Bachelor of Arts in political science in Los Angeles. In his student years, the young man continued to draw and publish in the youth newspaper. Soon some of his works appeared in the New York magazine Help! thanks to the assistance of the former MAD editor Harvey Kurtzman.

Terry worked as an Illustrator in his favorite magazine and gained experience that finally formed his views on the world for three years. Besides, the young man met with the English reporter John Cleese, who invited a friend to the comic troupe "Monty Python" later.

In his youth, Gilliam faced the excesses of the American police system and was repeatedly arrested during civil unrest associated with the confrontation between the authorities and black immigrants. The director admitted in an interview that he experienced incredible aggression and was ready to "throw bombs" on his native country at that time.

Feeling that it is necessary to get out of this situation, Terry left the United States, moved to England at the invitation of his friend John Cleese and was officially a subject of the British Queen in 1968.

Gilliam settled in London and worked as an animator in the humorous program Do Not Adjust Your Set for the first time. The artist met with the actors Eric Idle, Michael Palin, and Terry Jones on the set. He organized a comedy show Monty Python’s Flying Circus with them after the closure of the project.

At that time, Gilliam's visual art was characterized by a combination of bulbous shapes and soft gradients, which were the background for moving clippings from old photographs.

In 1978, Terry described these techniques in the book "Animations of Mortality," which became a partial autobiography of the animator and a guide to the use of the visualization language.

Gilliam's film biography began in 1974 when he appeared on screen in sketches of Monty Python, Election Night Special and Most Awful Family in Britain 1974. He was invited to act because no one wanted to play "a bespectacled commentator" and "a screaming brat on the couch." Terry enjoyed the transformation and he depicted characters disguised beyond recognition and dressed them in uncomfortable suits.

When the British comic troupe broke up, Gilliam took up independent work and wrote the script for the fantastic black comedy Jabberwocky, which was released in 1977.

After that, the author decided to create the "Trilogy of Imagination," which was dedicated to escaping from the crazy, absurdly organized society. The director embodied this idea in his films Time Bandits, Brazil and The Adventures of Baron Munchausen, which showed the problem through the eyes of a child, a 30-year-old man and a senior man.

Gilliam quarreled with producers of Universal Studios Hollywood and Columbia Pictures because of the losses, spending a considerable amount of money to produce these movies, which are crowded with star actors, difficult decorations and incredible costumes. Since then, the director had the fame of an eccentric, a scoundrel and a brawler.

In the 1990s, Terry took the next step in a creative career and directed the films The Fisher King, 12 Monkeys and Fear and Loathing in Las Vegas, which were united geographically and are called "Тrilogy of Americana." The plots were less fantastic but still confusing and surreal this time.

The audience did not understand the depth of Gilliam's talent and considered his work ridiculous, brightly colored chaos, woven into the stream of consciousness of "complete psychos." Critics and producers supported the general opinion and interfered with the activities of the director.

Despite this, Terry coped with public opinion and supplemented his filmography with the movies The Brothers Grimm and Tideland in 2005. The last film was the most shocking work of Gilliam because of the abundance of scenes with pedophile and necrophiliac implication and was awarded at the International Film Festival in San Sebastian

After that, there was no news from the director again and he returned with another masterpiece called The Imaginarium Of Doctor Parnassus 4 years later. It was shown outside the Cannes Film Festival, the film was Gilliam's first commercial success and was nominated for Empire Awards twice.

However, this movie was not without a scandal. When the main actor Heath Ledger died during the filming of a drug overdose, evil tongues began to say that working with Gilliam will bring anyone to death.

In 2012, there were rumors that the Austrian actor Christoph Waltz talks with the director about participating in his new project. It was known soon that the film would be called The Zero Theorem and it will be shown at the Venice Film Festival for the first time in 2013.

The movie again turned out to be confusing and ambiguous. In addition to cyberpunk costumes and decorations, Terry used a game of Hebrew terms in the name of the main character and called to find an imaginary but non-existent meaning of life.

Gilliam thought the plot of The Man Who Killed Don Quixote through at the same time with the movie The Zero Theorem and fought with the producers for the authorship and budget. When the film was almost finished, the director was deprived of the copyrights in the statement of his companion Paulo Branco. However, Terry said that it belongs to him entirely.

Since 1973, Gilliam's wife is a British dresser and makeup artist Maggie Weston. The couple met on the set of the movie Monty Python's Flying Circus.

From 1978 to 1988, the director's family had three children: girls Holly and Amy and a boy Harry. Growing up, the younger generation of Gilliam participated in several films of his father.

Terry improved his personal life in the UK and refused American citizenship because of disagreement with the policy of President George Walker Bush in 2006. Now the director is allowed to stay in the United States no more than 30 days a year.

Gilliam almost does not miss his homeland, fascinated by his work; he bought a mansion in Italy and tried to spend a lot of time with his family there.

In 2015 and 2018, there were rumors about the death of the creator of the Imaginaerum. An obituary mistakenly published the magazine Variety, that listed the name Terry and media said that the writer and director died of a stroke.

Gilliam is engaged in the promotion of the film, which was released in digital format in early 2019. He says nothing about creative plans for the future, remaining a mystery to fans. Terry Gilliam has a net worth of $50 million.

On January 17, 2019, the 78-year-old director recalled on Twitter cheerfully that he was still alive and presented a new music video from the film The Man Who Killed Don Quixote.