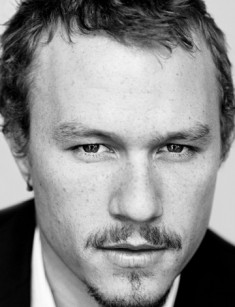 Heath Ledger is a Hollywood actor of Australian origin. Also, Ledger tried himself in producing, he shot music videos and wanted to become the director.

There are 24 projects in the filmography of Australian actor. The actor became popular due to his absolutely different pictures "Brokeback Mountain", "The Dark Knight", "10 Things I Hate About You", "A Knight’s Tale" and "The Patriot". Genre differences of these movies enabled Ledger to show his actor's talent and to win two Academy Awards, one of them posthumously.

Heathcliff Andrew Ledger was born on the 4th of April, 1979 in Australia. Mother of the future actor taught French, and his father worked as the mining engineer and was fond of a car racing. The parents named their children Catherine and Heath in honor of the heroes of "Wuthering Heights" written by Emily Brontë. When the boy was ten years old, his parents separated. Children stayed with their mother, but they kept warm relations with their father too.

Heath Ledger studied at Guildford Grammar School for boys. Heath grew an active child, supported school team in hockey and took dancing lessons. During school years Heath had to choose his specialization - cookery or acting. The boy didn't imagine himself as a cook, therefore, he made his choice in favor of dramatic art. Then it became obvious that Ledger had a talent. In 15 years Heath had already headed the school actor's group and was finally convinced in his future profession.

When Heath turned 17, he left his home and went to Sydney. Ledger was sure that in his dreams would come true in that city.

Ledger played the first role in the series "Sweat" in 1996. A gay cyclist performed by the young actor turned out to be very convincing - directors noticed the young talent. Next year one more picture - "Blackrock" was released. Heath Ledger got a small and not very successful role in this movie.

In 1997 Ledger was invited to the picture "Paws" to play a role of the student who was captured by Shakespeare's creative work. Heath earned some money for this role, but these shootings hadn't influenced his career.

In 1999 the actor decided to move to the USA. Alas, Ledger hadn't received any offers from the American directors, but Heath's fellow countryman Gregor Jordan proposed him the leading role in the movie "Two Hands". Then he had one more role in the picture "10 Things I Hate About You" after which Heath Ledger became the " idol of teenagers".

The military drama "The Patriot" which came out in 2000 became the first serious work for the actor. For the role in this drama Ledger earned 100 thousand dollars. Next five years were rather unstable for the actor. In his career, the actor had both successful and failing roles.

The year 2005 became the peak of Ledger’s creative biography. In 2005 four movies featuring Heath Ledger were released. The role of the gay cowboy in the picture "Brokeback Mountain" became the most outstanding among others, Jake Gyllenhaal became Ledger's partner in this movie. Heath got MTV Awards for the Best Screen Kiss, and the received a collection of 4 Academic Awards, 4 Golden Globe Awards and Golden Lion Awards.

The same year Ledger performed the character of Jacob Grimm in a gloomy fantasy "Brothers Grimm". This movie was based on the classic fairy tales from the collection of stories written by Brothers Grimm and showed the dark sides of these stories and the brothers were exposed as swindlers and evil spirits hunters.

Next year the shootings of the movie "Candy" were finished. This picture awarded prizes at International Movie Festivals.

Also, there were other noticeable works in the creative career of Heath Ledger. In 2007 Ledger received Bob Dylan's role in the biographic movie "I Am Not There".

In 2008 Heath Ledger appeared on the screens as a character of the Joker in the comic book blockbuster "The Dark Knight". The actor treated the character of the classical villain in his own way. Ledger's Joker is gloomy and a little mad, in accordance with the mood of the noir concept of Christopher Nolan’s movies.

The movie took the fourth place in the rating of IMDb, and Heath Ledger won the Academic Awards for Best Supporting role posthumously. The actor also got the BAFTA Awards, SAG Awards and the Golden Globe Awards in the same nomination and also posthumously.

The joker performed by the actor took the sixth place in the rating of "100 Greatest Film Stars" by the British "Empire" magazine and for many fans of comics, this embodiment of the villain became the best and the most iconic.

The character of Tony in the movie "The Imaginarium of Doctor Parnassus" became the last role of Heath Ledger. The actor died while the shootings still continued. The directors faced the uncommon task: the part of the video with Ledger's character had already been shot, but it wasn’t enough to use in the movie. Further work raised technical and ethical questions. As a result, the director came to the graceful decision: according to the plot Tony passes through a magic mirror of the doctor Parnassus which shows the internal essence of the person. This way directors explained the changes in character’s appearance. After magic transformation, Tony's role was played by three actors: Jude Law, Johnny Depp, and Colin Farrell.

Heath Ledger had a stormy private life – everybody was speaking about his numerous love affairs. In 1997 Heath got acquainted with Lisa Zane, but soon they broke up. In 2000 he had a love affair with Heather Graham.

Heath had a rather long lasting relationship with the actress Naomi Watts. Actors met each other on the movie set of "Ned Kelly" in 2002 – their relations had lasted for nearly two years.

But the summer of 2004 rocked Heath Ledger's world. At the shootings of "The Brokeback Mountain" he met the actress Michelle Williams and fell in love with her like a boy. The couple had lived in a civil marriage for more than three years. On the 28th of October, 2005, Heath’s daughter Matilda was born, and in September of 2007, the couple unexpectedly separated. It was said, that the actor endured parting with Michelle very hard and suffered a lot, he was depressed and at that time he became addicted to antidepressant drugs.

Several months before his death Heath Ledger had been often seen in the company of the model Gemma Ward.

On the 22nd of January, 2008 Ledger’s housemaid came to the apartment of the actor on Manhattan. She found Heath dead. Heath laid naked on the bed without signs of life and there was an empty packing of sleeping pills nearby. The housemaid called the police.

According to the autopsy results, it was impossible to indicate the exact cause of the actor’s death, but after carrying out toxicological examinations it turned out that Ledger died from the acute intoxication caused by the overdose of sleeping pills and antidepressant drugs.

Heath Ledger was a successful actor, worked without rest and slept for two hours a day. By his own words, his body was exhausted, and the brain continued to work without stopping. To forget about his fatigue, the actor took handfuls of pills. The press didn't deny that it could have been a suicide, but actor’s relatives disproved these guesses. Ledger's relatives said that though the perished looked tired, he had been working with pleasure and made his plans for the role of the Joker in the new movie about Batman directed by Christopher Nolan.

Ledger's body was sent home to Australia. On the 9th of February, he was cremated and buried in Perth. More than five hundred people came to the funeral ceremony of the actor, Michelle Williams was among them.

In 2014 the Australian government founded the actor's grant of Heath Ledger. Any beginning actor of the Australian origin can win a grant which includes 20 000 dollars and studies in Los Angeles.

In 2017 the premiere of the documentary "I Am Heath Ledger" was planned. 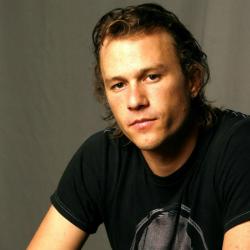