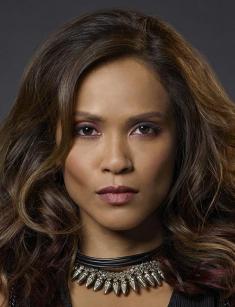 The star of the series Lucifer, Lesley-Ann Brandt, has gone a long way toward Hollywood success. She was born in Africa, lived in New Zealand, and found a vocation in America. The black beauty has pleased fans of American TV series with her acting since 2009. Her bright works include the role of Naevia in the series Spartacus: Blood and Sand and Spartacus: Gods of the Arena.

Lesley-Ann Brandt was born on December 2, 1981, in Cape Town, South Africa. Her father is Gary Brandt, and the mother is Charmaine Brandt. Lesley-Ann has an exotic appearance thanks to a multi-ethnic ancestry. She is of East Indian, German, Spanish, Dutch, and English descent.

The girl and her younger brother spent their childhood in Athlone, a suburb of Cape Town. According to Lesley-Ann, the neighborhood made her stronger and more intelligent, because it was not safe on the streets of the South African capital. Subsequently, these qualities would help the girl to break into the film industry.

The girl went to local Pinelands High School. She sang in the choir and participated in school productions. But Brandt admits that at that time South Africa was not a place where they patronized the development of art in every possible way. Lesley-Ann's parents understood it and decided to change their place of residence. When the daughter graduated from school, they left for New Zealand. Young Brandt was stressed.

"They literally dragged me, and I was kicking and screaming", she said and laughed.

It was hard for the girl to say goodbye to friends, childhood, and adolescence. Although now she understands that it was for the best. In 1999, Brandt’s family immigrated to Auckland, New Zealand. She began to work there. Lesley-Ann was a salesperson, then an information technology recruitment consultant. At the same time, she worked as a promo girl and model (her height is 5.57 ft. (170 cm)), shot in some commercials.

In 2008, she studied acting and was trained in the Meisner technique, developed by the American theatre practitioner Sanford Meisner.

In 2008, Lesley-Ann got the first prominent role in the New Zealand television project. She played Leilani in the popular comedy series Diplomatic Immunity together with famous actor Craig Parker.

The next role of the actress a real breakthrough. She appeared in the American historical project Spartacus: Blood and Sand (2010). Initially, the producers invited the girl to play the role of Sura, Spartacus's wife, but the casting director saw her as Naevia, a beautiful slave in love with gladiator Crixus.

In 2011, Brandt starred in the prequel to Spartacus, the project Spartacus: Gods of the Arena. But Lesley-Ann’s name was not mentioned in the credits of the third part of the epic. After the death of actor Andy Whitfield, who played Spartacus, the production of the series was delayed, and Brandt was already involved in other projects. As a result, Cynthia Addai-Robinson performed the role of Naevia.

The participation in the popular TV series was a golden ticket for Lesley-Ann. It helped the young woman become a professional actress, and directors began to offer her exciting roles. Soon she appeared in episodes of such famous TV projects as Legend of the Seeker (2010), This Is Not My Life (2010), Chuck (2011), CSI: NY (2011).

In 2010, the actress made her full-length film debut. She got a role in the New Zealand movie The Hopes & Dreams of Gazza Snell. A year later, she played nurse Valerie Khoury in the American detective drama InSight. In 2011, Lesley-Ann’s filmography finally included the leading role of Cassie in the horror film Zombie Apocalypse.

Until 2014, the actress played mainly bit parts in episodes of little-known TV series. The only major work of that period was the Australian film Drift (2013), in which Brandt worked with popular actor Sam Worthington. The South African appeared as a surfer, Lani, who did not part with the surfboard and wore a wetsuit or swimsuit, showing her beautiful body.

In 2014, Lesley-Ann was cast in a leading role in the post-apocalyptic series The Lottery, but the project was soon closed after the release of the first season due to low ratings. Brandt was upset and plunged into work on the new TV series The Librarians. The actress’s heroine, Lamia, supports the forces of evil, being a second-in-command of the immortal and invincible leader of the Serpent Brotherhood, Lancelot du Lac.

The successful and prominent role of that year was also the negative character of killer Larissa Diaz in the crime drama series Gotham. In 2015, the actress first appeared in a psychological drama, the film Painkillers. Her heroine is a special operation service member in Afghanistan. During the shooting, Brandt showed her perfect knowledge of Afrikaans.

Finally, in 2016 Lesley-Ann got the most famous role in her career. She appeared as Mazikeen in the series Lucifer.

The project's script is based on the comic book of the same name. In the story, Lucifer who is bored on his dark throne turns into an attractive modern man and goes to Los Angeles, where he works as a nightclub manager and leads a dissipated life.

Brandt plays a loyal ally of Lucifer, who lives on Earth and appears as a mulatto girl, who has mastered various martial arts. Her deeds are not very high, but at the same time, she has some good qualities.

Sources call the actress's personal life almost flawless because she has not been involved in scandals and forbidden love affairs. On September 5, 2015, she married actor Chris Payne Gilbert, whom she dated for three years. Soon the couple had a first child, son Kingston Payne Brandt-Gilbert.

On Instagram, the actress has thousands of photographs, including the photos of her child, depicting the happy parents with the baby, pictures of filming, and landscape photos, taken during traveling.

In 2018, the actress played in a full-length film, the black comedy Killing Winston Jones.

She continues to work on the series Lucifer, which is renewed for the 4th season and will be released in 2019.