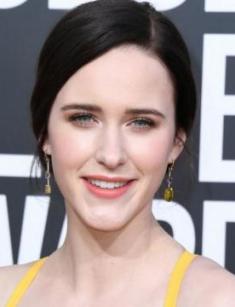 The Marvelous Mrs. Maisel was released in 2017, winning viewers’ love from the very first episode and receiving a lot of rave reviews. Thanks to her talent, American actress Rachel Brosnahan played the leading role of "Midge" Maisel in the TV series, showing a bright and unique young woman who managed to make it into the stand-up comedy which is still mostly the domain of men.

Rachel Elizabeth Brosnahan was born on December 15, 1990, in Milwaukee, the largest city in the state of Wisconsin. The Brosnahan family also had a younger daughter and son. When Rachel turned four years old, the family moved to Highland Park, Illinois. The girl began to show interest in acting in high school where she performed in musical theater.

In high school, Rachel also became interested in sports. She started wrestling and was on the school team for two years. Moreover, in 2007, the girl won the featherweight wrestling championship.

At the age of 16, the future actress began taking a class with Carole Dibo, director of Wilmette's Actors Training Center, who later became her manager. Then she entered the Tisch School of the Arts, where she graduated in 2012. Rachel’s mother said in a telephone interview with the Chicago Tribune newspaper that her daughter was an ambitious girl who wanted to do everything herself. So the actress has achieved everything on her own, and the relatives almost did not take part in the development of Rachel's career.

The actress made her film debut in 2009, playing a bit part in the horror movie The Unborn. So, at the beginning of her professional career, Rachel managed to work with famous stars: Gary Oldman, Idris Elba, and Carla Gugino.

This work was followed by small roles in prominent TV shows. Rachel starred in Gossip Girl, The Good Wife, and CSI: Miami. In 2013, the young woman appeared in the fantasy melodrama Beautiful Creatures. The shooting in this project played a significant role in the actress’s career. Rachel is a fan of the fantasy genre, the Harry Potter books, and “The Chronicles of Narnia” by Clive Lewis. Therefore, the part in the fabulous story became her dream job.

In 2013, Brosnahan also appeared in the popular TV series Orange Is the New Black, adding another significant work to her filmography. The woman got a small role in the flashback, but fans remembered the actress because such episodes in the series about the women's prison are an essential component of the project, and viewers usually watch them carefully. Another achievement of that year was a small role in the medical drama Grey's Anatomy.

In 2014, the lovers of TV projects began to recognize Rachel even better. The actress got characters that appeared in several episodes. In The Blacklist, the woman played Jolene Parker, the teacher, who at first looked as if butter would not melt in her mouth, but then turned into a wolf in sheep's clothing.

In 2015, Rachel achieved her first excellent acting success. The woman was invited to the political drama television series House of Cards. In this project, the actress fully elicited her potential, brilliantly performing the role of Rachel Posner. Her character is a beautiful woman who can be called femme fatale. At first, the heroine seems to be a silly but pretty woman of the night, but then her character turns out to be much more difficult and tragic.

The producers of the TV series created Rachel’s character to pinpoint attention upon violence against women and the vulnerability of prostitutes. Brosnahan did a great job and received an Emmy Award nomination for her role. The woman admitted in an interview that it was difficult to play Miss Posner because her heroine and Brosnahan had no common characteristics.

This work was followed by the drama series The Dovekeepers about the siege of Masada, the Jewish fortress, in 70 BC, which held the fort even after the fall of Jerusalem. So, Rachel first landed a role directly related to the Jewish people and Judaism.

Later, the actress landed significant roles in the TV series Manhattan and Crisis in Six Scenes. The woman became really popular in 2017, after the release of the project The Marvelous Mrs. Maisel. To make a comedy, telling how to shoot comedy successfully, is not an easy task, but the creators of the series managed to solve it. Rachel played a prominent role in the project. She brilliantly portrayed the role of a young Jewish woman from a wealthy family whose life is like a fairy tale.

Miriam "Midge" Maisel just needs to keep wearing a mask and be the perfect wife of an ideal husband, who is always in good spirits and looks fabulous even in the morning. However, when the ideal marriage collapses in the blink of an eye, Midge is suddenly left alone and gets a chance to understand what she wants. Rachel plays a young woman who has the strength to give up on public opinion and challenge the "woman's duties" of the 1950s which did not know feminism.

The actress’s fans spread rumors that Rachel dated actor Michael Zegen, her partner in The Marvelous Mrs. Maisel and her on-screen husband. However, these assumptions had nothing to do with the woman’s personal life. In 2018, there was news that Rachel married actor Jason Ralph. However, the actress said in an interview that, although Jason was her husband, they had been married for many years and did not want to make their family life public. The couple has no children.

Fans are also interested in the nationality of the actress. And viewers were surprised again. Although Rachel looks brilliantly as a Jew, she is not of Jewish heritage. Brosnahan has English, French, and Irish ancestry.

However, according to the actress, she knows Judaism and its culture very well thanks to her friends. Rachel says that she has been in the synagogue several times, attended Shabbat dinners, and visited Bar Mitzvah.

Viewers also admire the figure of talented Rachel. In The Marvelous Mrs. Maisel, Midge even appeared in a bikini, which made it possible to appreciate the actress’s body without clothing. It turned out that dresses did not flatter her body. Rachel has an hourglass figure, which is not surprising because she is 5.28 ft. (161 cm) tall, weighing 114.64 lbs. (52 kg).

Rachel is a member of social movements. She shares the ideas of feminism and has also twice completed the "Live Below the Line" challenge. The participants must feed themselves on the equivalent of the extreme poverty line for five days.

Nowadays, Rachel is not only an actress of the popular series and a celebrity but also a winner of several prestigious awards. For the role of Miriam Maisel, the woman received the Emmy and the Golden Globe Awards in 2018, and the Screen Actors Guild Award and the second Golden Globe Award in 2019. By the way, she keeps the awards in the bathroom, as there is not enough space for them in the apartment.

Besides working on the set of The Marvelous Mrs. Maisel, the actress starred in the film Ironbark. Rachel’s partner was Benedict Cumberbatch, one more star of the TV shows and a 21st Century Sherlock Holmes.

Fans of social media can subscribe to the woman’s Instagram account. The actress posts photos of filming, social events, and everyday life. Rachel loves her dogs and often shares the pictures of her pets’ life with the subscribers.

Rachel Brosnahan has an estimated net worth of $3 million.