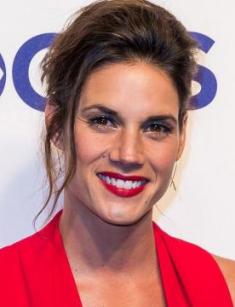 Many Hollywood actresses begin their careers as models. However, their talent and love of art are so powerful sometimes that they leave runways and glossy magazine photo shoots behind and enter the world of movies, iconic series, and character development. Missy Peregrym’s story is something like that.

Melissa Peregrym was born on June 16, 1982, into the family of the minister Darrell Peregrym and his wife, the housekeeper Vanessa. She became one of the three girls in the family. The would-be star spent the majority of her life in Surrey and finished the local Fleetwood Park Secondary School. Today, the family lives in Vancouver.

Similar to her character Haley Graham, the girl was a restless tomboy; she made friends with boys and played soccer, hockey, and lacrosse with them. Besides, she coached the school basketball team when she was a student and even considered teaching PE as a career.

Missy remembers that she spent little time at home; she did not watch TV or go to a movie theater. The parents adored their daughters and tried to bring them up with love and care.

After graduation, Peregrym entered the Aurora College and mastered snowboarding there.

Initially, the young woman was far from fashion and glamor. At the age of 18, she decided to try herself in that sphere, though and began to collaborate with Lizbell Agency. She was recommended to appear in commercials. Missy participated in the videos for Sprint Canada, Mercedes Benz, and even the Olympic Games.

The love of cinematography caught the young woman suddenly, just like the interest in modeling. The hot brunette debuted in the sci-fi series Dark Angel with Jessica Alba. After the successful start, the young actress received many new offers. The next year, she took the lead parts in the series Black Sash and Life As We Know It.

At the beginning of her career, Missy could have personified Catwoman; eventually, another former model, Halle Berry, got the role. Melissa was not disappointed, though. In 2004, she expanded her filmography with three series and a full-length movie.

Fans were pleased to learn the news about the new season of Van Helsing in December 2018. Besides, the artist appeared in several short movies, such as The Proposal and Something Red.

In addition to acting, Missy Peregrym is involved in charity work: she spread safe footwear among the unprivileged communities in South America along with TOMS.

Missy Peregrym has conquered many men’s and even women’s hearts.

Brendan Countee was the first who got under the woman’s spell; however, the couple spent only a year together. Further on, the actress dated the soccer player Ben Roethlisberger.

In 2012, rumors had it the beauty had a relationship with her colleague Rachel Skarsten who played Elizabeth I of England in Reign. However, two years later, Melissa married Zachary Levi; the ceremony took place in Hawaii. Peregrym announced the news about the wedding on Twitter on June 16. However, the spouses broke up in December and divorced legally in April 2015.

At the end of 2018, fans were excited by the actress’s engagement to her colleague Tom Oakley. On January 2, 2019, Melissa posted two wedding pictures on her Instagram.

Today, Peregrym is working on new episodes of the series FBI where she plays Maggie Bell.

The artist prefers to communicate with her fans via social networks. She often posts touching pictures of her nephews, friends, relatives, and her “best companion”, the dog Charlie. Besides, the woman shares her favorite books: for instance, she loved Brené Brown’s Dare to Lead: Brave Work. Tough Conversations. Whole Hearts.