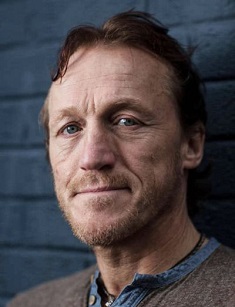 Jerome Patrick Flynn was born on 16 March 1963 in Broomley, Kent, England, UK. He comes from a talented family: Eric Flynn (father) is known to be an actor and a singer; Fern Flynn (mother) used to be a drama teacher. His brother Daniel Flynn is also an actor, and his half-brother Johnny Flynn is a musician and actor.

Flynn remembers endless landscapes and open countryside when he was exploring the surroundings in the company of his brother Daniel and sister Kerry. In his memories, he is close to nature and animals.

In his teens, Jerome acts in school plays and finds it exciting to be in the center of girls' attention. Later Flynn attends Royal Central School of Speech&Drama.

Jerome Flynn's career started in 1986 when he appeared in the LWT television film London's Burning as firefighter Kenny "Ramboo" Baines. In 1988 he had a role of Freddie in the ITV drama The Fear. In 1992 he played a role of D.S. Eddie Hargreaves in the police drama Between The Lines.

Particular importance is given to Flynn's character in the ITV series Soldier Soldier that began in 1990 and ended in 1997. He played alongside with Robson Green, and they performed Unchained Melody on the TV show in their characters as soldiers at a wedding. 17 million viewers who watched the TV show wanted to buy the love song. So the song was recorded by producer Simon Cowell and was released as a single under the name Robson&Jerome. The song was on the top of the UK chart in 1995. It stayed at No.1 for 7 weeks. More than 1.9 million copies were sold. It became the best-selling single of the year and won the duo the Music Week Awards in 1996 for the best single and best album. It was a period of musical success between 1995-1999 when Flynn played in musicals and on stage.

After the series Soldier Soldier, Flynn played as Eddie Wallis in the comedy-drama Ain't Misbehavin' (1997). At the same time, Jerome stays a singing partner of Robson Green.

In 1999 he played Boby Charlton in the film Best. On stage, he played Tommy Cooper in Jus' Like That a tribute to the comic magician written by John Fisher.

In 2007 Flynn directed and starred in the film Rude Tales after he moved to Pembrokeshire. The film consisted of a series of short stories. Flynn had a role of the central character, Jerome Rude. The film was shown in some independent cinemas.

Jerome also appeared on the television program, So You Think You're Royal?. On this program, it was established that through his mother he is a direct descendant of Oliver Cromwell, through his son Henry Cromwell, and that he is also a descendant of Edward I, Edward II, and Edward III of England.

On 16 July 2010 after almost 10 years away from acting, after his spiritual search, Jerome makes a spectacular return. He takes the role of Bronn in the hugely popular HBO television series Game of Thrones, based on the A Song of Ice and Fire novels of George R.R. Martin. Firstly he appeared as guest star in the first season and joined the starring cast for the second season. Flynn auditioned for the part while he had a bruise on the eye, left over from when he knocked himself in his brother's kitchen. He insists that this gave him a rough look which got him the part. Flynn auditioned for Bronn while affecting a Scottish accent, but the producers decided that he should speak a jaunty Northern English accent.

Jerome stars alongside Matthew Macfadyen in four series of Ripper Street for the BBC in a role of police Sgt. Bennet Drake. Ripper Street is an unusual combination of historical drama and procedural. Jerome claims that when he was younger he often played nice guys and this drama allows him to explore the darker side. He is sure nobody will mistake him for a pop idol anymore.

In 2016, he appeared in "Shut Up and Dance," an episode of the anthology series Black Mirror.

Jerome Flynn has a very successful career and has the estimated Net worth of $3 Million as for now.

There is not much to say about his personal life. Jerome has never been spoken about his relationship status, affairs, and marriages.

In the 1990s Flynn reportedly was in a relationship with Anna Jacobs. It was a period when Jerome started looking for the meaning of his life, though he had good results in his early career. Jerome met an American spiritual guru Andrew Cohen and became fascinated with his spiritual teaching. Being in a relationship with Anna he moved into a commune in North London, and they spent their time together there. Four years later Anna moved out of the group without Jerome. He decided to stay in and continued his spiritual search. After a breakup, the duo remained on good terms, unlike his next relations.

There was a rumor that Jerome was dating a co-star Lena Headey. In the series Game of Thrones actors never plays in one scene together. Fans of the series were astonished by that fact and found it strange that Bronn took part in battle scenes but never appeared in the royal throne room, for example. Especially it looked like a mockery in the last episode of the season, when Tyrion, Varys, Bronn and Podrick go to the big military council about peace negotiations between Daenerys Targaryen and Cersei Lannister (actress Lena Headey). Everybody came there with a huge risk of their life from different parts of Westeros. And suddenly before the negotiation starts, Bronn (Jerome Flynn) takes Podrick away "for a cup of tea."

Later the explanation seems to be found. Actors have written terms of contract with a film studio. There is a paragraph saying that they shouldn't star in the same room during the filming because of the personal issues. The duo dated for about a year before Game of Thrones was made and evidently had an unpleasant split up.

It seems Flynn prefers to keep his personal life secret from the public. Currently, an actor is single and happy.

As known Jerome had a period of life when he disappeared from the audience, however now he is back on television screens as well as in the social media. Jerome is an active user of social media sites. He has more than 7.7k followers on Facebook and around 38.6k followers on Twitter.

At the age of 55, Jerome is a devout vegan and an animal rights activist. He serves as a patron of the Vegetarian Society in the UK. Recently he was one of the leaders of the demonstration in Northern Ireland where he showed the protest against the opening of a new pig farm. In the interview for PETA (People for the Ethical Treatment of Animals) Jerome describes what happens to sensitive, intelligent animals raised for food and appeal to change our minds about eating meat. Already in college, Jerome paid attention to educational leaflets about farm animals, and at the moment he began to reflect on the problem arising in the society. He thinks it's important to learn the truth about how we treat farm animals. He speaks about the benefits of veganism and tries to make the Earth a better place to live.

Appearance: Jerome has a height of 6 feet with body weight 84 kg. He has brown hair color and blue eyes.