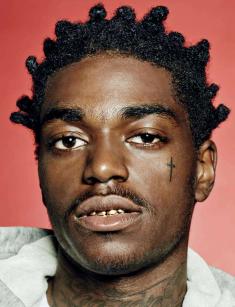 Dieuson Octave was born on June 11, 1997, in Pompano Beach, Florida, into the family of the Haitian migrants. The father left the family soon after the boy was born; the mother and the son moved to the neighboring housing community in Golden Acres; many Haitians lived there as well.

As the boy lived in the area, he got acquainted with the local criminals, started selling drugs, and did committed minor crimes. Octave was not interested in studies; his reputation was poor: the boy had several fights at school and got expelled.

Dieuson dreamed of becoming a rapper. He read a lot to improve his vocabulary and feel the English language.

When the boy turned 12, he began to rap. As Kodak Black remembered in his interviews, he had only two options at that challenging period: to sell drugs under the gun or rap.

Dieuson Octave went to a recording studio and realized that he enjoyed the process of music creation. Still, he did not stop his illegal activities; sometimes, the young man was arrested. At 15, Octave was a suspect in a grave crime; the cherished dream of becoming a musician seemed to be far from coming true. However, a music producer noticed the talented hooligan; Dieuson’s life changed dramatically.

The young talent took a pseudonym J-Black; he took his career seriously. When the beginning artist turned 12, he joined a local rap group Brutal Youngnz. When his plans in the band failed, he became a member of another group, The Kolyons.

In December 2013, J-Black had his debuting mixtape Project Baby released; it was popular in local night clubs and brought the musician the first recognition. The next two years were marked with two new mixtapes: Heart of the Projects and Institution.

Although the rapper’s music was quite appreciated, he was not much popular. In October 2015, the famous hip-hop musician Drake danced to J-Black’s song “Skrt” and contributed to the development of the young man’s career: the number of Google search queries increased, and the public finally recognized the musician.

Atlantic Records wanted to use the artist’s growing popularity and offered him a contract. In May 2016, Kodak Black announced his participation in the Parental Advisory tour; he missed it due to personal circumstances.

French Montana was the first among popular rappers who collaborated with Kodak Black. Their first single “Lockjaw” came out in May 2016 and immediately got into several R&B and hip-hop charts.

The same year, in August, Dieuson’s solo single “Skrt” was present in many theme charts. Octave decided to make use of his increasing popularity and released the fourth mixtape Lil B. I. G. Pac with Atlantic Records. It was the young man’s first album that got into Billboard charts.

The racial incident darkened the success. The rapper posted a video on his social networks where he laughed at a black woman; according to the lyrics, she was not as beautiful as a white one.

The beginning of 2017 brought the single “Tunnel Vision” that topped many American charts. The song started with number 27 in Billboard and reached the sixth position. It was a fascinating achievement: Kodak Black was a relatively new artist at that moment.

The debuting studio album Painting Pictures came out in March 2017; it was one of the most successful projects in Kodak Black’s career and reached number three in Billboard 200.

August 2017 was marked with Project Baby 2, the sequel of the mixtape Project Baby. The single “Codeine Dreaming” was particularly triumphant; Billboard Hot 100 put it on the 52nd position.

On Valentine’s Day 2018, Kodak Black presented another mixtape that proved to be popular, Heartbreak Kodak. In fall, the artist announced the track and music video "Wake Up in the Sky” with Bruno Mars and Gucci Mane.

When the musician was imprisoned once again, he met a Jewish attendant who gave him several Hebrew lessons. Soon, the young man converted to Judaism and changed his name to Bill K. Kapri.

Kodak Black is one of the most ambiguous rappers today: he has been imprisoned for major and minor offenses, such as possession of weapons, possession of cannabis, and armed robbery.

In January 2017, the musician posted a video on his Instagram page where a woman was having sex with him and some other men. The scandal erupted; following the public outcry, Kodak Black deleted the video and publicly apologized.

In June 2017, the rapper openly admitted that he preferred white women because the black ones were too “dirty” for him; the controversy fueled in the media.

Little is known about Bill’s relationships. Some editions wrote about his romance with the rapper Cuban Doll.

Two years before the New Year 2019, the rapper presented the second studio album Dying to Live. The singles “If I'm Lyin, I'm Flyin” and “Zeze” with Travis Scott and Offset had been released in fall and became popular.

Nowadays, the musician continues to be involved in scandals related to the video content on his social network pages, art, and violation of the law. Perhaps, they create the “criminal” image that a true rapper needs and make the musician famous and recognized.