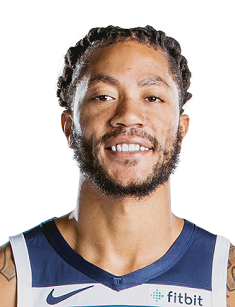 Derrick Martell Rose is a highly successful and award-winning American professional basketball player. He currently plays in the National Basketball Association (NBA) for the Minnesota Timberwolves. As a college student, he played one year of basketball for the Memphis Tigers. After a very successful run, he was the drafted first overall by his hometown Chicago Bulls in 2008. Rose was named Rookie of the Year at age 22 and is currently the youngest player to receive the NBA Most Valuable Player Award, which he received in 2011.

Rose was born on October 4, 1988, in Chicago. He attended Simeon Career Academy, where he was highly sought after by colleges. He chose to join coach John Calipari in the University of Memphis. While playing for the Memphis Tigers, the team received the most wins in NCAA history at a 38-2 record. This would be the Tigers’ first appearance in the NCAA championship game in 25 years, as well as their first number 1 ranking. However, Rose’s SAT scores were found to be invalidated through an NCAA investigation in 2009. Because of this, the Memphis’ entire 07-08 season was vacated by the NCAA.

Born on October 4, 1988, Derrick Martell Rose was raised in Chicago, Illinois. Raised in the tough Englewood area of Chicago without a father, he and his three older brothers were carefully raised by their loving and strict mother, Brenda.

In an interview with Sports Illustrated, Rose spoke about his mother.

"My mom would walk down the street and drag us home if she heard we were getting into trouble. Even the drug dealers, when they saw her coming, would stop dealing and tell her where we were."

The Rose family was very close. In the absence of a father figure, Derrick’s three brothers, Dwayne, Reggie, and Allan, became Derrick’s authority figures. When he was in eighth grade, Derrick’s talent was starting to shine. He had exceptional movements as a point guard, paired with excellent court vision. As his popularity grew, his brothers started to protect him from interested parties. One or more of the brothers would be there to drop him off or pick him up from school. They would be there when he’s practicing and punish him for misbehavior.

Rose enrolled in Chicago’s Simeon Career Academy in 2003. His skill and popularity quickly grew soon after. He had won several awards and victories in his career. By his senior year, Rose was ranked the best high school point guard in America, averaging at 25.2 points per game. He led Simeon to its second consecutive state title with a 33-2 record. The Chicago Tribune named Derrick its 2007 “Illinois Mr. Basketball Player” in the same year.

Rose’s first NBA season was in 2008-2009, where he got 16.8 points and 6.3 assists per game on average. He led the Chicago Bulls back to the playoffs and received the Rookie of the Year award.

The next three NBA seasons saw Rose develop from a point guard into one of the game’s good all-around players.

His 2010-11 season earned him the NBA league MVP award, following an average of 25 points per game. At 22 years and 191 days old, he would be the youngest player to ever receive the award. In the 2011-12 season, Rose’s performance helped the Bulls receive the No. 1 seed in the Eastern Conference. However, Rose received a serious knee injury in the first game of the post-season. This injury would not allow him to play in the rest of the playoffs and the entire 2012-13 season.

Rose has a long time relationship with model Alaina Anderson, who he is rumored to be married to. When Rose took some time off from the game in the 2017-18 season to think about his career, he allegedly eloped with her before they got engaged in 2018. Anderson gave birth to their first child named Layla in April 2018.

In a previous relationship with stylist and designer Mieka Reese, Rose has a son named Derrick Rose Jr. who was born on October 9, 2012. Mieka Reese is the founder of Rich Girl Candy.

Meanwhile, he is a devout Christian and is vocal about his faith. He wears a wristband with the words “In Jesus Name I Play”, along with several tattoos displaying his faith.

Rose was involved in a federal civil lawsuit in 2016. He and two friends were accused of raping his former girlfriend in August 2013. An eight-member jury found him not liable in October 2016. An appeal was denied in 2018.

Rose funds The Rose Scholars program, which he started in 2018. The program helps students receive a higher education through scholarship opportunities and funding.

In 2010, Rose was part of Team USA, a competitor in the 2010 World Championships which won gold. He got an average of 7.2 points, 3.2 assists and 2.1 rebounds per game. The 2014 World Cup team roster also includes Rose. In the same season, he won the MVP award, he was included in the All-NBA First Team in 2011 with LeBron James, Kevin Durant, Kobe Bryant, and Dwight Howard.

After an excellent performance that led the Bulls to the playoffs, Rose was given the 2008-09 Rookie of the Year award. In the NBA’s history, Rose is the third player to ever win the award. In this season, he got an average of 16.8 points, 6.3 assists, and shot 48% from the field, all in his rookie season.

Rose has an estimated net worth of $85 million. The value is earned from his salaries and league contracts, as well as his several endorsement deals. During his time with the Knicks, Rose earned around $21 million. In 2012, he had a deal with Adidas that would pay him above $10 million per year for the next 14 years. The deal could be worth $185 million. Rose currently earns $2.1 million a year as a veteran minimum salary.