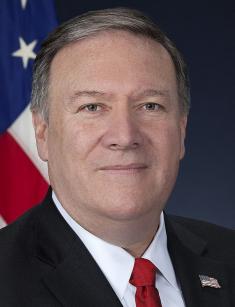 Mike Pompeo is an American businessman who suddenly got involved in the political sphere. His biography is full of provocative statements, the desire to make the country better and raise the United States to a new level.

Michael Richard Pompeo was born on December 30, 1963, in Orange, California. He is Italian by nationality; over time, his family moved to the United States. The boy lived with his family in the county of Orange, in the city of Santa Ana. Little Mike attended Los Amigos High School in Fountain Valley, California. The young man was interested in basketball since childhood, and in school years he played in the local team.

In 1982, the guy graduated from school and entered the United States Military Academy at West Point. In 1986, Pompeo received a military education and joined the army. Since Michael had already been trained, he was immediately given the rank of an Armor Branch Officer. At first, the young man was sent to serve in West Berlin, and then to participate in the military operations in the Persian Gulf.

In 1991, Michael completed his service with the rank of Captain. After the service, Pompeo enrolled at Harvard Law School and at the same time, he worked as one of the editors of Harvard Journal of Law & Public Policy. In three years of study, the young man thoroughly mastered the legal sciences and in 1994 received a Juris Doctor. After University, Michael worked as a lawyer in Washington.

Right after the army, Mike Pompeo went into business. At the age of 34, the man together with his classmates created the company Thayer Aerospace, which specialized in the production of parts for aircraft.

Pompeo was the CEO of the company for eleven years, and in 2006 he sold his interest. In the same year, Mike became president of the company, which was an oilfield equipment manufacturer. The company was a partner of Koch Industries.

In 2010, Pompeo decided to finish his business career and got interested in a new field for himself, politics.

Even though politics became a new kind of activity for Mike Pompeo, the man won the primary elections in the Republican party, and then got 58.8% in the elections to the House of Representatives from the fourth electoral district of Kansas. In subsequent elections, which took place every two years, Mike won three times and gained 30% more votes than his rivals. Pompeo was a member of the United States House Committee on Energy and Commerce.

In 2014, Pompeo was a member of the United States House Select Committee on Benghazi, that specialized in investigating the attack on the US diplomatic mission that occurred in Benghazi, Libya, in 2012. Mike and another U.S. Representative, Jim Jordan, criticized Hillary Clinton, the US Secretary of State, who ensured the security of American institutions in the country. She was accused of concealing reliable information about the accident in Libya.

In November 2016, the United States presidential elections, which ended with Donald Trump's victory, took place. He immediately announced that he would appoint Mike Pompeo Director of the Central Intelligence Agency (CIA). On January 23, 2017, the man was officially approved by the US Senate, where 66 senators voted for his candidacy. At the oath-taking, Mike swore that he would abide by the law, and, most importantly, he promised to objectively analyze the implementation of the nuclear non-proliferation agreement with Iran. In relation to this country, America is steadily introducing new sanctions that relate to trade.

Mike Pompeo's domestic policies are based on his religious beliefs. The politician is in favor of lowering tax fees and government expenditure. He's against abortion and for gun control, i.e., increasing regulations related to gun ownership. Mike also supports mass surveillance and data collection programs for United States citizens.

When in 2013 there was a terrorist attack during the Boston marathon, Pompeo made loud statements accusing the leaders of the Islamic State. The politician believed that they did not condemn terrorist attacks and approved of their actions. Since then, Mike became known as a fighter against Islam.

In foreign policy, Pompeo firmly defends the interests of his country. In particular, Mike spoke about Russia as an aggressive state. He believes that Vladimir Putin is a threat to European countries and the United States. The politician also says that the Russian Federation does not take any measures to defeat the banned terrorist group the Islamic State of Iraq and the Levant. He justifies his dislike for Russia by accusing it of interfering in the United States presidential elections and invading the political life of the country.

On March 13, 2018, Donald Trump signed a decree on the dismissal of the United States Secretary of State Rex Wayne Tillerson and appointed a new Secretary of State, Mike Pompeo. On his Twitter page, the President promised that Mike, like no other, would perfectly cope with his duties. In April 2018, the US Senate approved Pompeo's candidacy for the post of the Secretary of State.

According to the American politician, North Korea poses a great threat to the country and it is necessary to negotiate with it. On October 7, 2018, Mike Pompeo met with North Korean leader Kim Jong-un. The main goal was to prepare for the second summit of the United States and the Democratic People's Republic of Korea. The meeting went well, and both sides were satisfied. There was even a rumor that the politicians had lunch together.

Personal life of the American politician turned out very well. In his youth, Mike met a girl Susan, who later became his wife. Everything goes well in the couple's relationship; they are happy and love each other.

In 1991, Susan Pompeo gave birth to their son Nicholas, who became the most important member of the family. Mike turned out to be a good father because he first put the child on his feet and only then devoted himself entirely to politics. The couple doesn't have any more children.

Now Mike Pompeo continues to work as the US Secretary of State and is planning the whole 2019 policy. On his Twitter and Instagram account, the politician posts photos from events and meetings. He has hundreds of thousands of follower who click on his page every day.

In addition to politics, Pompeo regularly attends the Evangelical Presbyterian Church, where he teaches the 5th grades of Sunday school.

Mike is heavily built, he weighs about 198 pounds, and his height is 5 foot 9 inches.