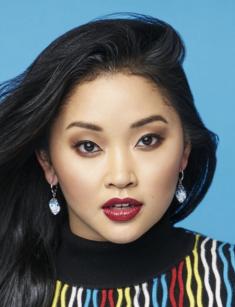 The cinema knows a lot of stories when a future TV star did not even think about an acting career, from childhood devoting her energy and thoughts to dancing, ballet or gymnastics. Then she suddenly faces radical changes in her interests; as a result, the professional actress "shines" before an audience. Kristina Asmus chose this path in Russia, and Lana Condor did it in the USA.

A girl named Tran Dong Lan was born on May 11, 1997, in the Vietnamese city of Cần Thơ. Five months later, she and her younger stepbrother Arthur were adopted by American parents, Mary and Bob Condor, who gave her a new name - Lana Therese. The father was a successful two-time Pulitzer Prize-nominated journalist and a former Vice President of Yahoo! Sports.

The girl spent her early years in Chicago; then the family moved to the 40th largest island of the United States, where Lana attended her first dance lesson. Later, she continued to study this art in Seattle. However, they did not live there for a long time. When the daughter turned 11 years old, the Condors moved to New York City and about five years later to Santa Monica.

“My parents are white. When others see me at lunch with my father, they probably think that he is my agent. But I have never felt unnecessary in our family. I love my family and am very grateful to them because they are the reason I have it all. If I had not been adopted, I would likely have worked in the rice field in Vietnam,” the girl said, telling her biography.

Studying and ballet were the girl’s hobbies since childhood. She has worked in Los Angeles Ballet, performing at the Joffrey Ballet, the Alvin Ailey American Dance Theater and Gelsey Kirkland Academy of Classical Ballet. Later, on the recommendation of her parents, Lana began to improve acting skills diligently and devotedly.

According to the celebrity, it was the ballet that helped her build a successful acting career and feel comfortable in front of the camera. Lana attended six educational institutions on the way toward the cinematography, including Notre Dame Academy Girls High School, New York Film Academy, and many others. She also earned acceptance to Loyola Marymount University but later postponed her studies.

In 2014, Condor appeared in the musical Hairspray at Notre Dame Academy as Amber Von Tussle, who competed with the title character, the fat girl who dreamt of winning a dance show.

Two years later, the actress was cast in the superhero movie X-Men: Apocalypse, where she brilliantly portrayed Jubilee, a mutant wearing a yellow jacket. Before shooting, she had read a lot of comic books and watched all the X-Men cartoons on Netflix not to disappoint Marvel fans.

The same year, Lana appeared in the drama about the investigation of the terrorist act committed by the Tsarnaev brothers.

Then, her filmography included the romantic TV series High School Lover, showing the 17-year-old girl, who falls in love with an adult man, and the film To All the Boys I've Loved Before in which she appeared with Noah Centineo, who later became her close friend.

By the way, her heroine Lara Jean Covey inspired new Halloween costumes, and fans copied her image including the hair tie. In addition to a stage career, Lana Therese does charity work. She pays together with the Asia Foundation to put girls from Cần Thơ through four years of school, providing them with books, food, uniform, and bicycles.

The girl's heart is not free. In August 2018, she and her boyfriend Anthony De La Torre (young Jack Sparrow in Pirates of the Caribbean: Dead Men Tell No Tales) celebrated their third dating anniversary. After the release of the film about a schoolgirl in love, writing letters to the beloved man, the actress admitted that she also did it:

“I am a hopeless romantic. I am still writing love letters, as well as my boyfriend. He even includes drawings in them. I would say that he is much more romantic than me. We have a great relationship. I don't know how lucky I am.”

On November 25, 2018, Condor touchingly congratulated her lover on his birthday on Instagram, calling him a "golden boy" and "her better half." The young actress and her boyfriend willingly participate in photo shoots, including the favorite youth brand H&M winter collection.

Lana admitted in an interview that she did not start with coffee, but with a smoothie in the morning, Emily Blunt is her favorite actress, and the most often pronounced phrase is “you should know.”

In 2019, at least four movies with Lana have been prepared for the release. These are the fantasy action film Alita: Battle Angel directed by Robert Rodriguez, the romantic comedy Summer Night, which production concluded after 19 filming days, the series Deadly Class, which shooting photos the girl posts on social networks, and the thriller Warning.

The slim actress (her height is 5.25 ft. (160 cm), and the weight is 103.61 lbs. (47 kg)) appeared on the cover of the December 2018 issue of Euphoria, which also published Lana’s interview about Deadly Class. It transpired that she studied martial arts, sword fighting and learned to ride a motorcycle.

On Instagram, Condor regularly posts photos of official events depicting her in gorgeous outfits, as well as pictures of the beach in Malibu where she lays in a bathing suit. The actress also likes Twitter, where she wrote jokingly that she spent most of her life thinking about pasta and did not forget about Facebook.