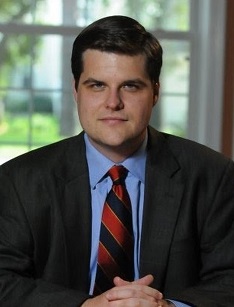 Matt Gaetz is an attorney and political activist. He belongs to the Republican Party and sometimes is called "Trump's protege".

In 2010-2016 he was in the Florida House of Representatives and represented the 4th District. Since 2017 he has worked as the U.S. Representative for Florida's 1st congressional district, serving as a member of the Budget, Armed Services, and Judiciary Committees.

He is also famous for being an attorney in Fort Walton Beach, Florida. At the present time, Matt is inspected by The Florida Bar. At the beginning of 2019, he ostensibly threatened a witness on the Internet.

Matt Gaetz has an estimated net worth of $27 million.

Matthew was born in Hollywood, Florida. He comes from the family of politicians. His mother Victoria Gaetz has to stay in a wheelchair because of the problems that emerged during her second pregnancy. Victoria was warned and offered to stop the pregnancy, but she decided to give birth to Matt's sister Erin. After that accident, Matt began to argue against the legalization of abortion.

Matt's father, Don Gaetz, served a representative of the Florida State Senate (2006-2016) and was a Senate President during 2012-2014. Very often Matt is compared to his father, and sometimes they are called Papa Gaetz and Baby Gaetz.

Erin Gaetz, his sister, is also involved in politics. She is a Republican operative. Erin is engaged in former Florida Governor Jeb Bush’s 2016 presidential campaign. In 2016, Erin started her digital content firm off. She was also occupied in Matt's campaign.

Gaetz's grandfather, Jerry Gaetz, was the mayor of Rugby and a candidate for Lieutenant Governor of North Dakota. He died of a heart attack.

Matt spent his childhood in the Fort Walton Beach area of Florida. In the age of 10, Matt and his family changed their place of residence from southern Florida to the Panhandle. Their home later became famous in Jim Carrey’s 1998 film “The Truman Show”.

Matthew studied at Florida State University in Tallahassee and graduated with a bachelor’s degree in interdisciplinary sciences in 2003. In 2007 he earned the law degree Juris Doctorate in The College of William and Mary in Williamsburg, Virginia.

Before appearing in politics, Matthew worked as an attorney with the firm of Keefe, Anchors, Gordon and Moyle in Fort Walton Beach. During his work as a lawyer, he propagandized a more transparent government. He fought corruption and received national recognition for his diligence.

In 2010, after Ray Sansom resigned, Gaetz took Sansom's place in the 4th District (including southern Santa Rosa County and Okaloosa County). Matt gained 43% of the vote in a Republican primary and took 66% of the vote, defeating Democratic nominee Jan Fernald in the special general election. Matthew was reelected in 2012 and 2014.

Gaetz was chairman of the Finance and Tax Committee. He invested $1 billion in tax cuts and succeeded in balancing the state budget. Matt worked as chairman of the Criminal Justice Subcommittee. There he worked on some toughest crimes.

Gaetz and State Senator Joe Negron offered legislation that was made to speed up the execution of the 404 inmates on Florida's death row. Gaetz and Negron asked the Governor to sign a death penalty for prisoners who have exhausted their appeals. Matthew in alliance with State Senator Greg Evers suggested legislation that excluded the federal ethanol content mandate. According to mandate, 10% of gasoline sold in Florida contain ethanol. Governor Rick Scott signed the code in May, 2013.

Gaetz is the author of code that allows respondents who successfully used a "stand your ground" defense during their proceeding, to apply for a 'certificate of eligibility' to delete information related to "stand your ground" from their criminal records. It happened after the George Zimmerman trial for the shooting of Trayvon Martin.

In 2013, Gaetz declared that in 2016 he would stand for the 1st District state senate seat. On March 21, 2016, Gaetz left the state race and decided to stand for the U.S. House seat and represent Florida's 1st congressional district.

On August 30, 2016, Gaetz scored 35.7% of the vote in the Republican primary. During the general election, Matt succeeded according to election results: he outran Democratic candidate Steven Specht with 69% of the vote.

He has served in Congress since Jan 3, 2017 on the Budget, Armed Services, and Judiciary Committees. Matt works on national security, tax reform, regulatory reform and adherence to constitutional principles.

Gaetz took part in the important passage of the Tax Cuts and Jobs Act in the 115th Congress, which provided tax relief for workers, families and job creators. He is proud to be a part of this historic passage.

The Escambia County Land Conveyance Act became Matt’s first bill that successfully passed through the House. It provided leaseholders in Santa Rosa Island with the possibility to purchase fee simple titles to their property.

Gaetz was listed as a member of the moderate Republican Main Street Partnership from at least January to June 2017.

Matt leads the politics alongside President Trump in Washington to protect the values of the country and make America great. In his politics, Matt struggles to unmask corruption in the FBI, the Justice Department, and the Clinton Foundation. He shows up on and gains popularity on cable news from time to time to bring accountability to the government and protect President Trump.

Matt Gaetz is next up for reelection in 2020.

There is not much information about Matt's personal life. As for today, Matt is not married. Though it may sound unusual, as he is a politician. It's known that in his free time Gaetz like fishing, golf, spending time with family and his dog, Scarlet.

In 2008, Matt was arrested for a DUI. Although during the detention he denied taking a breath test, his license was not suspended for a year. The refusal of taking a breath test wasn't used against him in a criminal proceeding. According to the police, when he was stopped, Matt hardly found his license and registration, his eyes were red, and he tottered when he got out of the car. Despite this fact, charges against him were dropped. Between 1999 and 2014, Gaetz had 16 speeding tickets in Florida.

On February 26, 2019, Gaetz wrote a tweet toward Michael Cohen, who was Donald Trump's former personal attorney. In the message, Gaetz spoke out about Cohen's extra-marital affairs and also called Michael's wife unfaithful. It happened the night before the public hearing of Cohen. Other members of Congress considered the tweet an attempt to threaten Cohen. After lengthy discussions and critical remarks, Gaetz deleted the tweet and apologized in the next tweet. The Florida Bar, an integrated bar association for the state of Florida, started an investigation towards Gaetz.

Serving as a Florida State Representative in 2015, Gaetz and Democratic Rep. David Richardson put out a correction to cancel the state's ban on gay adoption. The correction was adopted, and the bill went to the Florida State Senate, but conservative lawmakers heavily criticized it. Matt's father Don Gaetz led the bill to passage. Later the bill was signed by Governor Rick Scott.

Gaetz is against sanctuary cities, which don't dedicate local law enforcement resources to prosecuting people exceptionally for having no documents. In 2016, Gaetz announced his attitude to illegal immigrants, saying that they bring no benefit to the country and only do harm.

Speaking about gun policy, Gaetz was called "one of the most pro-gun members of the Florida Legislature". Gaetz made an effort to permit Floridians with concealed-weapons permits to carry weapons openly in public. But this effort was eventually unsuccessful.

In 2016, Gaetz admitted the problem of global warming. Although he disagrees with the scientific statement on climate change that human beings are the leading cause of this problem. In November 2017, Gaetz took part in the bipartisan Climate Solutions Caucus. He advocates technological innovation and economic inducements aimed at climate change. He increased federal funds for global warming research by NASA, NOAA and universities. In 2017, Gaetz offered legislation to cancel the Environmental Protection Agency (EPA).

Gaetz is engaged in Russia investigation. In November 2017 he entered a congressional resolution calling for Robert Mueller to leave his office as Special Counsel. Gaetz did not trust Mueller to conduct the investigation, because Mueller was noticed to be in a close relationship with the dismissed FBI director James Comey.

Gaetz speaks for removing cannabis from a Schedule I drug to a Schedule III drug. He sees the benefits of its further research and the use for medicinal purposes. In 2015 Matt became a sponsor of a House bill to extend Florida's Right to Try Act to include medical marijuana. In September 2017, Gaetz took part in the American Medical Marijuana Physicians Association's annual conference.

Gaetz is known to be the most enthusiastic defender of President Trump. On February 23, 2017, Gaetz spoke at his town hall in Pace, Florida. During the meeting, he was often asked about his relationship with Donald Trump. Gaetz closed his town hall by shouting a campaign slogan popularized by Donald Trump in his successful 2016 presidential campaign: "Make America Great Again!". Also, there is a popular photo when Gaetz takes a selfie with President Donald Trump in the House chamber after Trump's State of the Union address in Washington D.C. The audience often describes Gaetz as "proud Trump protege", "Rising star of the Trumpian right", "Trump's ultimate defender" and even "Trump's best buddy". In a July 13 Twitter post, Trump made a compliment to Gaetz.