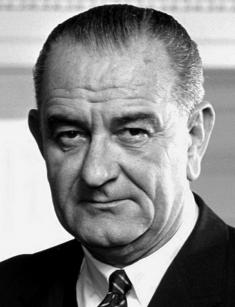 The 36th US President Lyndon B. Johnson took responsibility for the country immediately after the tragic death of John F. Kennedy. For four years, the politician successfully fought poverty, crime, racial and religious discrimination, but lost the battle with the Vietnamese and his own health.

Lyndon Baines Johnson was born on August 27, 1908, in a farmhouse near Stonewall, Texas, and became the oldest of five children born to Samuel Ealy Johnson Jr. and Rebekah Baines. Later the family had Sam Houston Johnson, Rebekah, Josefa, and Lucia. The boy had English, German, and Ulster Scots ancestry.

Johnson was a talkative child, back in school, he participated in public speeches, debates, played baseball, did well on all the subjects. Natural curiosity and flexibility of mind allowed Lyndon in 1923 to become the youngest student of Johnson City High School.

His parents insisted that their son should go to College early. In 1926, the future President of the United States enrolled at SWTSTC (now Texas State University), and two years later he paused his studies to teach Mexican–American children to read and write.

"I remember even yet the pain of realizing and knowing then that college was closed to practically every one of those children because they were too poor. And I think it was then that I made up my mind that this nation could never rest while the door to knowledge remained closed to any American."

A part-time job helped Lyndon save money to pay the University fees. The young man received his diploma in 1930. The eloquence skills he learned in his youth provided him with a job as a teacher of public speaking at Sam Houston High School in Houston and later in the United States House of Representatives.

Congressman Richard M. Kleberg appointed Lyndon B. Johnson as his legislative secretary in 1931. The position attracted the young man not so much by the range of duties as by the abundance of acquaintances: the assistants to the president, Franklin D. Roosevelt, Vice President John Nance Garner, and Congressman Sam Rayburn became his friends.

Johnson was successfully elected to the United States House of Representatives in 1937. In domestic policy, he supported Roosevelt's New Deal, which could not escape the eyes of the president: Lyndon was appointed to lead Operation Texas, the aim of which was to relocate European Jews to Texas, USA, away from Nazi persecution in Germany. Johnson personally helped hundreds of Jews to enter the state through Cuba, Mexico, and South America.

In 1948, after a scandalous election — opponents suspected Johnson of ballot fraud, he ran for the U.S. Senate. The politician became famous for "courting" authoritative colleagues Senator Richard Russell and Sam Rayburn, whose support later helped in the presidential elections.

In his post, Johnson, concerned about the threat of possible Soviet domination of outer space, ensured the adoption of the 1958 National Aeronautics and Space Act. Because of this document, the civilian space agency NASA was established.

Already in those years, Lyndon B. Johnson showed himself as an experienced leader and psychologist, in biographies, historians described him as "the greatest intelligence officer Washington has ever known." The politician knew the strengths and weaknesses of his colleagues and opponents, their prejudices and skeletons in the closet, the ways of winning their votes.

In July 1955, Johnson, who smoked 60 cigarettes a day, suffered a heart attack, but at the end of the year announced his intention to run for President from the Democratic Party. The main competitor of the politician was John F.Kennedy. The young man stood out because of the liveliness of his mind and natural charisma in comparison with the strict, rude Lyndon.

The Americans chose Kennedy. In January 1961, along with the inauguration of the President, Johnson was appointed his Deputy. It is assumed that Kennedy offered Lyndon the post out of politeness and expected a refusal. Until the last day of Kennedy's term in office, men didn't get along.

Johnson, who was used to working hard and solve several problems at the same time, wanted to expand his powers as Vice President. Kennedy entrusted him with the issues of security, migration, education, and science, specifically — Aeronautics. In 1961, the USSR first sent a man into space, and the President demanded that Johnson should develop a project that would allow the United States to catch up.

On November 22, 1963, 2 hours 8 minutes after the murder of John F. Kennedy, aboard the Air Force One Lyndon Johnson under the gaze of the widow Jacqueline Kennedy took the oath as President of the United States. There was no Bible aboard, so the politician had to take the presidential oath of office using a Roman Catholic missal from President Kennedy's desk. The photo of that moment is considered to be the most famous photo ever taken aboard a presidential aircraft.

In memory of his predecessor, Johnson gave the space center at Cape Canaveral the name of John F. Kennedy and created the Warren Commission to investigate the assassination of the President. Johnson's term in office took place in a prosperous economic period, at the time of low unemployment. The United States at that time did not enter into significant disputes with other countries, and the attention of the new president focused on domestic policy, and after 1966, on the war in Vietnam.

In the first year in power, Lyndon started a war with poverty, crime, racial and religious prejudices. His ideas were embodied in the program "Great Society." This was followed by changes in economic policy, thanks to which the personal income of Americans in 1966 increased by 15%.

In 1965, blacks gained the right to vote in the elections, and after the murder of civil rights worker Viola Liuzzo, Johnson went on television to announce the arrest of four Ku Klux Klansmen. He angrily denounced the Klan as a "hooded society of bigots," and warned them to "return to a decent society before it's too late." He became the first president since Ulysses S. Grant, who arrested and prosecuted members of the Ku Klux Klan. Under Johnson, African-Americans first began to hold public office.

As a result of Lyndon's rule, the number of Americans living below the poverty line fell from 23% to 12%, and children raised in such families received free education.

A series of high-profile murders, of John F. Kennedy and his brother Robert, Martin Luther King Jr., led to the passage of the Gun Control Act of 1968. The document expanded the list of persons who were forbidden to have weapons, introduced the Federal Firearms License, which allowed to purchase "curious and relic" weapons, increased taxes.

The failure of the war in Vietnam, the reasons for which are described in detail in biographical television film Path to War (2002), weakened the authority of Johnson. In the primary elections of 1968, he scored 49% and his opponent Senator Eugene McCarthy 42%. In this regard, Lyndon decided not to run for president for a second term. A Republican Richard Nixon succeeded him.

On November 17, 1934, Lyndon Johnson took Claudia Alta Taylor, also known as "Lady Bird" to be his wife. Nickname, which the babysitter gave the girl in her childhood, in fact, became her name: Lyndon married Claudia Bird, this name was also written in the marriage certificate.

Johnson proposed to her on the first date. Lady Bird didn't want to rush the wedding, but ten weeks later she already said "yes." The ceremony was held at St. Mark's Episcopal Church in San Antonio. Claudia lived through three miscarriages before the daughters Lynda Bird (1944) and Luci Baines (1947) were born. A fun fact: spouses and children had the same initials, LBJ.

Lady Bird was the only legitimate wife of Johnson, but in the personal life of the politician were some other love affairs. Until 1967 he had a relationship with Alice Marsh (née Glass), the beloved of the newspaper magnate Charles Marsh, and in 1948, he met a young coquette Madeleine Duncan Brown. It is assumed that the second child of the woman, Steven Mark Brown, was from Lyndon. Her son tried to prove that he was a member of the presidential family, but in 1989 he lost the case.

A secret actuarial study predicted that Johnson would die at the age of 64: the politician smoked a lot, suffered from excess weight (in 1970, he weighed 236.07 pounds) and heart problems. On 20 January, 1973, Lyndon suffered his third heart attack, which resulted in him being declared dead. He was 64 years old.

The funeral was held at the National City Christian Church in Washington, D.C. The service was presided over by President Richard Nixon. Johnson was buried in his family cemetery in Stonewall, Texas.