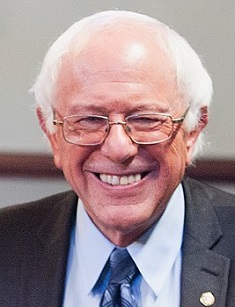 Next presidential election is just around the corner. As a result of the elections the 46th Head of State will be elected. The voting is promised to be complicated because of economic crisis and very intriguing as the candidates are diverse more than ever. And there are not only politicians, who want to be the Head. There are entrepreneurs, army veterans and even media people. Among others, TV hostess Oprah Winfrey and the actor who is known as “The Rock” want to be elected. And not the last of this list is Bernie Sanders, who is full of beans and ready to compete for governance despite his advanced age. His previous press secretary Symone Sanders has recently said that for once there will be a lot of promising nominees. So what kind of person is Bernie?

Bernie Sanders is the leading U.S. statesman, social activist and Vermont Senator for 12 years. Born in 1941 and brought up in NY City, he started his politic life in far 1971 and now is the record holder among nonpartisan congressman. He is the only American Senator, who considers himself democratic socialist and stands for equality and interests of workers and bourgeoisie. Though his career has witnessed ups and downs, Bernie holds his head up and is always ready for new heights.

The politician was born on September 8, 1941, in Big Apple. He spent his childhood in Brooklyn with parents who were Jewish settlers from Poland.

Bernie understood what role politics plays in life because his uncle Abraham Schnützer was killed in the Holocaust.

As a teenager, he went to Brooklyn's James Madison High School and intended to enter Harvard University, but because of his mother’s death, he had to study at Brooklyn College. In 12 months, he entered the University of Chicago and graduated in 1964 with a diploma in police sciences. That’s exactly where his political life has started.

From a young age, Bernie took an active part in various youth movements, leagues and in the Civil Rights Movement. He also was one of organizers Student Nonviolent Coordinating Committee and partook in March on Washington, where he heard the famous speech of MLK Jr.

Before taking the political path, Bernie used to work as an educator, carpenter, independent author and that’s not all the professions. But in 1971 he joined Liberty Union Party and since the following year ran as Liberty Union applicant for the administrator of Vermont. However, in October 1977, Sanders left it and operated writing and administrating the American People's Historical Society.

In 1980, Bernie nominates a candidate for mayor of Burlington and wins. Throughout his eight-year board, the media called him “socialist” and Bernie used to agree with it. The precursor of the Vermont Progressive Party, the Progressive coalition was established by his proponents in his first period. That time, Burlington was the pioneer in financing community land trust in the USA.

Under the authority of Sanders, the municipal funds were rebalanced and there were led substantial urban renewal projects like the Burlington's Lake Champlain shoreline’s upgrading. In 1981, the mayor protested against turning Central Vermont Railway’s coastal land into private enterprise and apartments.

In 1990 Bernard Sanders became the representative in the U.S. House of Representatives. Before Bernie only Frazier Reams was chosen to House of Representatives as the free-standing candidate. Though, there was a problem for the congressmen: he needed to seek out policy-making follower to advance his statute, so he primarily worked with the Republicans. During his administration, he was taking active measures to prevent the proliferation of weapons, bank fraud, cruelty against women and much more. Sanders denounced the Iraq War and voted down commitments authorizing the use of power in 1991.

In 2006, he succeeded in the senate race, beating Republican entrepreneur Richard Tarrant.

Sanders was in favour of participatory democracy of Americans and stood for election financing reform. Due to his speech on December 2010 that was published later, the law to a broadening of the Bush-era taxation has been passed. In 2017, he suggested increasing the hourly rate for contract employees to 15 dollars. The next year this law was passed.

Being a senator, Sanders took part in the work of multiple significant committees. As a deputy, Sanders has quite a high ranking and according to many news resources, he is the third-most-popular senator in the USA.

In the spring of 2015, Sanders declared a wish to run for president and on May 26 his campaign was formally introduced. It was principally dedicated to inequity and injustice in American society. Particularly, Sanders pledged tax reform that would heighten rates for well-off population, government-run health care program, cheaper higher education, the counterbalance of men’s and women’s salary and better state control over Wall-street.

Unlike other candidates, Sanders refused from significant companies’ sponsorship to support his campaign and accepted personal donations instead. To get higher ranking and folk’s encouragement, the candidate interacted with people online on Twitter, Facebook and Reddit, where the number of his followers was steadily growing. His net worth was nearly the lowest among other’s candidates own capitals and accounted for $800,000 before mortgage debt. A while ago he was blamed for buying an extremely expensive car with election funds. Indeed, he had purchased Tesla electrocar. Though, he was very censured by the public after purchasing the third house.

Even though Sanders used to uphold frontier Hillary Clinton, it was great amazement when on July 12, 2016, Bernie declared about his decision to drop out of presidential race, having consequently sustained Clinton. The next year he denied Mueller investigation's conclusion of Russian interposition in the presidential electoral, criticizing Clinton’s campaign for insufficient efforts to preclude the intervention, though.

On January 21 Bernie attended Women’s March that was organized to stand up against patriarchy, disrespect of women’s rights, authoritarianism and other things that Donald Trump epitomizes. There Bernie gave an inspirational speech, saying that Americans refuse to go back despite Donald Trump would drag the country that way.

After that Bernie didn’t settle and stayed active: in November 2016 he published his book that is “The New York Times” bestseller. The next year the politician epically debate with Ted Cruz at CNN. The politician mainly dwelt on GOP’s plan for taxes.

It isn’t a secret that Sanders continues criticizing the current president, particularly his attitude towards women (Access Hollywood tape), not to speak of politics. So On February 19th, 2019, Bernie reported about his running for the 2020 U.S. presidential election on Vermont Public Radio, having entered Democratic Party. General medical insurance for Americans, reduction of students’ arrears for tuition and, as usual, combating inequality are among his main campaign ideas. In general ideas and resourcing mechanism stay the same as in 2016, but this time he has the major party behind his back and potentially more chances for victory.

His previous wife was a college girlfriend Deborah Shiling. So, having lived together for 2 years, they didn’t have kids and broke up. His firstborn Levi is an illegitimate child by his girlfriend Susan Mott.

His current wife, Jane O'Meara is an educator and the Head of Burlington College. She has three kids from a former husband that are considered and treated by Bernard like his own. The next day after the marriage ceremony, spouse travelled to the USSR at the Government’s invitation in the capacity of the city manager.

Not so long ago his wife Jane was under judicial investigation for bank fraud at the Burlington College. Luckily, the court had ruled that Mrs Sanders wasn’t guilty and punishable by a charge.

Larry, Bernie’s older brother, is an academician and member of the Green Party of England and Wales. Larry Sanders, obviously, lives in Great Britain.

Bernie Sanders claims to be a democratic socialist, who advocates of Progressivism and Scandinavian example of social democracy. According to one of his quotes, Sanders is willing to achieve a higher quality of life for average Americans. Even though Trump calls him “socialist/communist”, Bernie says there is no connection between these two ideologies.

Regarding the foreign policy, Sanders considers the fight against terrorism and ISIL in league with Russia, Iran and other countries as a matter of priority. Basically, he stands by "progressive foreign policy", which can improve the partnership between global communities. He consistently criticizes current foreign affairs of the United States. Consequently, the politic speaks about the normalization of relationships between Cuba and Iran. Sanders also actively encourages sanctions on Russia.

Sanders encourages the prohibition on military weapons and arms sales and intensively votes for legislation that can interfere with these issues. The senator is a sympathizer of the global health care program and a decline in prices for medicinal preparations. As a democratic socialist, he is strongly concerned with social issues. Sanders strongly upholds providing sickness benefit, paternity leave and paid time off work for labourers. Thanks to Sanders, Vermont is the first state in the USA with marriage equality. He pleads for feminism, LGBT rights and opposes racism.

Sanders believes that there must be formed a new way to citizenship for immigrants and at the same time speaks out against programs at the invitation of guest workers to the USA.

The politician spoke out against the American invasion of Iraq and condemned certain actions at the time of the Global War on Terrorism. Widespread surveillance and the USA Patriot Act were among them.

As an American Jew, Sanders manifests Judaism but does not regularly attend synagogue. His father did that only on the Day of Atonement. Although Bernie doesn’t often speak about faith, he used to take part in the Jewish ceremony of blessing Hanukkah candles.

Besides being a patriotic American, he takes pride in affiliation to Jewish people. In the distant 1963, Bernie and his first wife Deborah went on a trip to Sha'ar HaAmakim, a kibbutz in the Noth of Israel together with Socialist-Zionist youth organization Hashomer Hatzair.

Certainly, his life is not all about politics, as you might have thought. Recurrently Bernie is in the movies: he debuted in “Sweet Heart Dance” (1987). In the comedy “My X-Girlfriend's Wedding Reception” Sanders’s own childhood in Brooklyn was being reflected. Several years ago Bernie was a guest star together with Larry David on “Saturday Night Life”.

Among other things mentioned, Bernie writes books that have been publishing since 1997. His first work is “Outsider in the White House” which was republished in 2015. The book is a political memoir and written in co-authorship with Huck Gutman.

One week after the election of Donald Trump in 2016, Bernie published his next book “Our Revolution: A Future to Believe In” that was dedicated to the motivation for his presidential race.

In 2017 “Bernie Sanders Guide to Political Revolution” was published and turned out to be a bestseller. It is actually a YA version of his previous book about his political path, political positions.

And his latest publication “Where We Go from Here” in 2018 is about his political struggle with Donald Trump and enhancing of Progressive movement.

Apart from that, Bernie came up with a TV show Bernie Speaks with the Community (1986-1988) that he hosted.