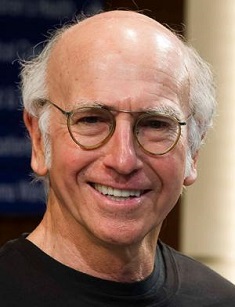 Larry David is an American actor, screenwriter, comedian, and producer. Generally, he is famous as an executive producer of the “Seinfeld” show and a scriptwriter of “The Comedians” show.

David was born in Brooklyn, the United States of America into the Jewish family, to parents Rose and Mortimer Julius "Morty" David. The side of Larry's father moved to the USA from Germany in the 19th century.

At the beginning of his career, Larry David worked as a clerk in a shop, limousine driver and TV repairman.

He lived in Manhattan Plaza, a large federally subsidized residential complex of 46 floors and 428 feet (130 m) at 400 and 484 West 43rd Street in midtown Manhattan, New York City, with Kenny Kramer, who was his co-worker in “Seinfeld.” From 1984 to 1985 he worked as a screenwriter of the talk-show “Saturday Night Live.“ During his work there, he managed to take part in a sketch only one time.

David left “Saturday Night Live“ in the first season, but got back several days later as nothing special had happened. This situation inspired him for the second season of Seinfeld. It got the name “The Revenge.”

Larry met his first Seinfeld stars at this stage of his career. He worked with Michael Richards (Kramer) and with Julia Louis-Dreyfus. Also, Larry himself starred in the episode of the show.

In 1989 David and Jerome Allen «Jerry» Seinfeld started working on the pilot edition of "The Seinfeld Chronicles" which later would become a foundation of the Seinfeld show. Sometimes David himself starred in the show's episodes and even gave his voice to Steinbrenner. However, he wasn't mentioned as an actor in the titles. David wrote a scenario for seven seasons of Seinfeld and got back in 1998 to write a final. The sells of the DVD-version of the film brought Larry David $55 million. Also, he was nominated for the Emmy Award 19 times for working on this project.

In the 1990s Larry started working on a new project - “Curb Your Enthusiasm” show. It was shown on TV for the first time October 15, 2000. The exciting feature of the film was that the actors got only a brief review of the sketch which they are going to play. It was pure improvisation.

Many topics of the new show Larry David took from good gold “Seinfeld”. Larry became the prototype of one of the show's characters. Social awkwardness and misunderstanding of a fictional Larry became the foundation of the show. According to David, he himself would have had such a nature in real life if he had lacked communication and emotionality. As a result, the statement “Larry David moment” appeared in people's speech: it means an awkward and silly situation. It became a real meme. This show gave birth to many other funny quotes and memes which now are very popular on Twitter and other Social Media.

On this show, David worked with Jeff Garlin, Susie Essman, and Cheryl Hines. The comedians Bob Einstein, Wanda Sykes, and Richard Lewis appeared on the show regularly. The actors Ted Danson and Mary Nell Steenburgen played the roles of themselves in the episodes.

In October 2009, one of the series of the show was criticized by the president of the Catholic League William Anthony "Bill" Donohue. He claimed that it is better for Larry to leave his career. It indicated that the comedian's golden years had already passed.

Larry David has also played roles in other films and TV-series. For example, he wrote and directed the film “Sour Grapes” in 1998. Its plot is about two cousins who feud over a casino jackpot. The film brought neither commercial nor a critical success.

He played secondary roles in two 1980s Woody Allen's films - “Radio Days” and “New York Stories.” Later, in 2009, he managed to get the leading role in Allen's film “Whither Works.”

Larry also had a cameo appearance on the HBO series called “Entourage.” He played a client of Ari Gold. Since Larry David's daughters were huge fans of Hannah Montana, he, along with them, played the leading role in the episode "My Best Friend's Boyfriend," where they were waiting for a free table at a luxurious restaurant.

During the presidential election in 2009 in the United States of America, David supported the candidate Barack Obama. In December 2010, he wrote an article for the New-York Times, a sardonic critique of the extension of Bush-era tax cuts headlined "Thanks for the Tax Cut!"

David appeared as a participant of the discussion on the NBC series “The Marriage Ref.” Also, he played Sister Mary-Mengele in the film “The Three Stooges” in 2012.

David became a co-author of the HBO television movie“Clear History” and even played there as an actor.

Larry was an author and an actor of the Broadway play “Fish In The Dark.” Also, Rita Wilson, Jayne Houdyshell and Rosie Perez starred there. The work was dedicated to the death of a family patriarch. It opened on March 5, 2015. Jason Alexander took over David's role in July. The play closed in August. The sell of this work brought its authors 13,5$ million and broke the record for a Broadway show.

In 2015 and 2016 Larry appeared as a guest star playing the candidate for the seat of the president of the United States of America Bernie Sanders on “Saturday Night Live" show.

Earlier Larry David was an often and favorite speaker on the Stand-Up show.

Interestingly, the singer The Narcicyst has written the song Pretty Good, where he sang several words about David:

“I feel like Larry David, I left Canada lately, haven't written in months, feeling frumpy and pasty can't get any work did and my manager hates me, a social assassin, candid and racy...”

The other song's name is “Larry David”

In May 2005, the couple created the Internet blog «The Huffington Post»

On 13 July 2007, Larry filled for a divorce. According to him, the reason for this decision was the absolute difference in their characters. Laurie became his ex-wife, after almost 15 years of the marriage.

Today there is no information about Larry's current girlfriends.

A DNA test, which was conducted for the PBS series “Finding Your Roots” in October 2017, showed, that Larry David and Vermont Senator Bernie Sanders (whom Larry had parodied in the sketches of Saturday Night live during the presidential election in 2016) are distant cousins. Both of them have Ashkenazi Jewish ancestry.

David is an atheist. He thinks that religion should be ridiculed.

In 2017 David's net worth was evaluated at $900 million. However, this sum does not take into account his divorce. David also does not agree with this amount, claiming that he has nowhere near it.

Today David lives in California. Located in the coastal Californian neighborhood of Pacific Palisades, his house is one a one-acre property with a guesthouse and a swimming pool.

Larry David has been nominated for many various awards, such as: