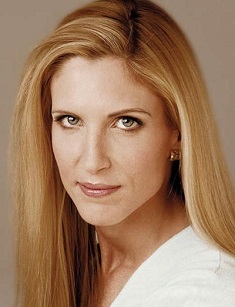 Ann Coulter is an American commentator, writer, columnist, and lawyer. She is the author of 12 books. Ann is best known for her controversial speeches and polemical style of expression.

Ann Hart Coulter was born on December 8, 1961, in New York City. Her father John Vincent Coulter was an FBI agent of Irish–German heritage, and a corporate lawyer. Her mother's name is Nell Husbands Coulter.

She has two siblings: a brother named James, who is an accountant; and a brother named John, an attorney. Ann studied in New Canaan High School, Connecticut, when the family moved to live there and graduated in 1980.

From childhood, Ann was interested in political life. Her parents were Republican, and she remembers her father idolizing Joseph McCarthy. She read a lot of books about politics. In the age of 14, Ann had a chance to visit a law school in New York City, where her older brother studied. In a young age, she has read a lot of Republican books, and at that time it inspired her to become a writer.

Ann graduated from Cornell University, Ithaca, New York in 1984 with a Bachelor of Arts degree in history and from the University of Michigan Law School in 1988 with Juris Doctor. She worked as an editor of the Michigan Law Review.

In 1994 after working in a private law firm in New York, Coulter moved to Kansas City. She started her work as a lawyer for Spencer Abraham, a Republican U.S. senator representing Michigan. She dealt with crime and immigration issues.

Serving as a lawyer, Ann was representing Paula Jone who wished to get a confirmation from Bill Clinton for misbehaving towards her. After years of negotiations, the lawyers won Paula Jones a settlement of $850,000. Jones admitted this sum and also accepted the offer to make nude photo session for Playboy (as wiki stated). It was shocking to Coulter, and she called her “the trailer-park trash”.

In 1996 Coulter worked on the cable news channel MSNBC but was dismissed after arguing with a disabled Vietnam veteran. These words sounded like a joke for her, and she justified herself saying she had no desire to offend somebody. In a short time she earned the reputation of a sarcastic and controversial person.

Despite her speeches, she starred on television programs such as CNN and Fox News. In 2004 Ann appeared in the documentaries. To promote her new book she went out on "The View" with a co-host Whoopi Goldberg who was not amused to hear some expressions concerning racism.

Ann Coulter wrote for "Human Events", a conservative weekly. In 1999 she became an author of a column for United Press Syndicate. Ann appears on radio and educational institutions. Once during the speech at the University of Arizona, somebody from the crowd threw a pie at her. Her words evoke different feelings: from hatred to admiration. The main thing is that her thoughts resonate with the public.

Ann Coulter was planning to make a speech at the University of California, Berkeley, the birthplace of the Free Speech Movement. But later she had to cancel her Berkeley speech as administrators offered a day when students are no longer in class because the students' safety came first to the University. She did not agree to perform at the designated time.

Ann Coulter opposes abortion, except if a woman is raped.

Coulter is a Christian. She summarized her view of Christianity in a 2004 column. Although she sometimes is attacked with critics concerning her unchristian style of behaving.

Ann performed with a speech concerning civil liberties. She approved the period of NSA warrantless surveillance from 2001 to 2007 and criticized Rand Paul for "this anti-drone stuff".

Coulter is against hate crime laws. She used to name them "unconstitutional".

She has excoriated former president George W. Bush's immigration proposals. From her point of view, they led to "amnesty". In 2007, she wrote a claim that the current immigration system was made to diminish the percentage of whites in the population on purpose. Coulter is the opponent of the Immigration and Nationality Act of 1965.

Coulter is against same-sex marriage, defining the marriage as a union of one man and one woman. At the same time, she isn't an anti-gay person. On April 1, 2015, she upheld Indiana's Religious Freedom Restoration Act and argued on discrimination against LGBT people. Coulter opposes publicly funded sex reassignment surgery. She supports the Public Facilities Privacy & Security Act and banning transgender military service personnel from the United States military.

Ann Coulter won the attention of many LGBT fans since the 1990s. She was a member of the 2010 HomoCon of GOProud and spoke about GOProud and the controversy over their inclusion at the 2011 CPAC. She openly declared about her influence on GOProud not to support same-sex marriage. She also came to the defense of Milo Yiannopoulos for his comments defending pederasty.

Coulter was a protagonist of George W. Bush's policy, but she didn't agree on the approach to immigration. In the 2016 Republican Party presidential primaries, Ann presented herself as a Donald Trump's defender. But after his election and immigration policies, Coulter changed her attitude towards him. At present, she speaks out against Trump's plan.

Ann strongly supports the War on Drugs. She was invited on "Piers Morgan Live" show to speak about drugs.

Coulter is a proponent of the white genocide conspiracy theory. She made a comparison of non-white immigration into the United States with genocide.

Comments on Islam, Arabs, and terrorism

On September 14, 2001, several days after the September 11 attacks, Coulter wrote in her column about ineffective airport harassment and converting all terrorists to Christianity. After this statement Coulter's was fired by the National Review. Coulter blew up the public with one of her famous quotes: "Not all Muslims may be terrorists, but all terrorists are Muslims."

In 2002 Coulter critically spoke of the U.S. Department of Transportation, having expressed her discontentment on refusal to use racial profiling as a component of airport check.

Coulter published an article about the testimony of FBI whistleblower Coleen Rowley. Coleen was accused of blaming her superiors when they refused to authorize a search warrant for conspirator Zacarias Moussaoui. Zacarias did not allow to seek through his computer. Zacarias was known to be a Muslim in flight school who had overstayed his visa, and he was confirmed in affiliations with radical fundamentalist Islamic groups. Coulter considered all these facts not to be the ground for a rummage.

Ann has an opinion that the airline should be proud of any of the charges of discrimination brought against them, because it gives more safety to passengers. Some critics call her racist for speaking out statements like these.

On October 8, 2007, in the interview with Donny Deutsch, Ann Coulter was accused of anti-semitism. In a talk, Ann showed her attitude to the Jews, saying she wants them “to be perfected”. Later she explained that she meant the Jews being converted to Christianity and nothing more. Coulter was criticized, and the National Jewish Democratic Council asked media to stop inviting Coulter as a guest commentator. But there were guests in a talk show who defended Coulter against the claim. In denial of anti-Semitism, Ann responded on her Twitter that she liked Jews, on a par with everyone.

Ann Coulter has no husband and has no children, though she has had several relationships. In the list of her boyfriends were Bob Guccione, Dinesh D'Souza, and Andrew Stein. Ann is known to be denying rumors that she was dating Jimmie “J.J.” Walker, the comic star of the 1970s sitcom “Good Times.”

Ann is fond of rock music, and some of her beloved books include the “Bible”, “Mere Christianity”, “Wuthering Heights”, and “Anna Karenina”.

Ann Coulter is a gorgeous and sexy woman. She is in great shape at her 57. Ann is 6 feet tall, and her feet size is 12 US which is actually big. But Ann professionally chooses shoes that fit her body and look appropriate.

Ann Coulter is a passionate user of social media. It's her effective method to gain attention. Once she was taking a flight with Delta Air Lines and wrote a complaint on her Twitter after her sit was taken by another passenger. She also took pictures of other passengers and posted them on Twitter, which caused great discontent. In response, the company apologized and refunded the $30, but noted that it was not necessary to post images of people on the Internet and insult the company in such a nasty way. In the video published on Youtube Ann Coulter is being insulted with jokes at the Comedy Central Rob Lowe Roast. Some of her fans began protecting her, and some haters think that she deserved it.

Coulter owns a house in Palm Beach, Florida, a condominium in Manhattan, and an apartment in Los Angeles. As of 2019, the net worth of Ann is estimated at $8,5 million.