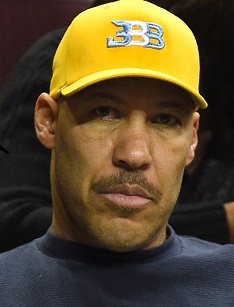 LaVar Christopher Ball is an American media personality and entrepreneur. He is also known as the father of three basketball players: Los Angeles Lakers point guard Lonzo (who is known for his perfect playing alongside LeBron James); shooting guard LiAngelo, who was enrolled at UCLA briefly with a basketball scholarship; and current Los Angeles Ballers combo guard LaMelo. LaVar's way to success is interesting, full of ordeals, ups, and downs. Let's know more about him!

LaVar's birthplace is Los Angeles, California – he was born there on October 23, 1967, to the family of Anderson and Maria Ball. He was the middle child of his parents. LaVar has four brothers - LaFrance, LaValle, LaRenzo, and LaShon and two sisters. As a kid, Ball studied at Canoga Park High School in Canoga Park, Los Angeles. There he joined both football and basketball students' team – he performed on the position of a quarterback on the football team and played basketball as a forward. In one season, the player made totally 316 rebounds and broke the school record. As a college student, LaVar was 6 ft 4 in (1.93 m) tall and weighed 250 lbs (113 kg). Besides sports, LaVar was interested in criminal justice at college and had hopes of being a U.S. Marshal. While studying, Ball had an icon - Charles Barkley.

LaVar started playing college basketball at West Los Angeles College in the low-tier Western State Conference despite having little experience at the prep level. At the beginning of season 1986, the sportsman made 33 points and 18 rebounds against Porterville College. Shortly after, he moved to NCAA Division I Washington State and performed there as a starting forward. In 26 matches he took part, LaVar averaged 2.2 points, 2.3 rebounds and 1.0 assists per game. After one season, Ball was transferred again to Cal State Los Angeles, which competed in the NCAA Division II, playing alongside three of his four brothers.

Having graduated from college, Ball visited a football tryout and, as a result, came back to sport. So, before he was famous, he performed for Long Beach City College on a tight end position. On May 1, 1994, the sportsman was signed to the National Football League (NFL) as a defensive end. On March 7, 1995, Bal became a member of the Jets – performing there as a tight end. The same year, he was sent to the London Monarchs World League of American Football (WLAF). While playing football for the NFL, Ball also was a member of the practice squads of both the Jets and Carolina Panthers. Interestingly, he remained with the latter till late 1995. That time he got injured and had to give up playing and retire. Later he came out of retirement for the sake of becoming a professional coach.

LaVar Ball has founded Big Baller Brand - a sports apparel company with Alan Foster in 2016. Besides, LaVar is the company's CEO. Later it was revealed that, despite it, LaVar had a little part of the company while his son Lonzo was Big Baller Band's majority holder. As a promotion for his business, LaVar referred to TV comparing the brand with major shoe companies like Nike and Adidas. Once Ball's company was accused of breaking National Collegiate Athletic Association (NCAA) rules. Even George Raveling, the global basketball sports marketing director of Nike, said that Ball was the worst thing which had happened to basketball in the last hundred years. As a response, LaVar claimed his company was the strong competitor for Nike. Eventually, Nike, Under Armour and Adidas declined to sign an endorsement deal with Lonzo Ball.

In May 2017, Big Baller showed to the world its first shoes ZO2 – it cost $495. Shaquille O'Neal, Golden Tate, and many other famous athletes criticized the company for such a high value, while Dick Vitale took aim at the price by citing Lonzo's performance against Kentucky at the NCAA Tournament. Arian Foster, in his turn, supported LaVar. Ball responded to all the accusations by tweeting, «If you can't afford the ZO2'S, you're NOT a BIG BALLER!». Many business experts noted Ball's style of promoting was both shameless and smart.

In September, the company announced a signature shoe for LaVar's youngest son LaMelo Ball, the Melo Ball 1 (MB1), its price was $395. The situation evoked heated debate about LaMelo's NCAA eligibility. Ball, in his turn, showed a general disregard for the NCAA rules, saying that the shoe would be released whether or not his son would become ineligible.

In March 2019, the news appeared on The New York Times that LaVar's son Lonzo parted ways with the Big Baller Brand's manager and co-founder Alan Foster. The reason for it, according to Lonzo, was that earlier, in 2002, Foster had been arrested for money laundering and fraud. Besides, Lonzo claimed he had stolen $1.5 million from within the company. Also, Lonzo stopped wearing Big Baller shoes, changed it for Nike. It meant the Brand got through difficult times. That time LaVar even thought about closing the company.

LaVar Ball’s net worth is evaluated at $6 million.

The best sports romances begin on the court. LaVar transferred from West Los Angeles College to Cal State Los Angeles after one season of college basketball. That's where he met his future wife Tina - on the court. According to a basketball scout, it was not Tina's blonde hair and blue eyes that had LaVar smitten; it was her «length.» She stands at 6 feet tall, just six inches short of LaVall's impressive height of 6'4″.

The spouses have a lot in common: Tina was a basketball player in college too, and that's why they fell in love. According to LaVar’s future admissions, he saw this tall girl, very attractive, walking down a hallway and he said her,

«I don't know what we're going to do, but we're gonna be doing something!»

In a recent interview, Ball said he was even confident on their first meeting that they'd be married one day. Tina also retold their first meeting – when they met, he told her they were going to get married and have boys. That was LaVar's "master plan"- to have a basketball family!

Speaking about Tina’s occupation, she is an athletic director at a middle school in Montclair, California. Having two parents active in sports played a role in shaping the Ball brothers, Lonzo, LiAngelo, and LaMelo.

She also takes part in ruling of their family business. In 2016, LaVar and Tina took a step towards building their family's brand and started their own clothing line called Big Baller Brand. They have also been named «the Kardashians of basketball»!

There was information that the woman had suffered a stroke. According to some sources, she had life-threatening skull surgery to relieve brain pressure. LaVar didn't even allow his kids to see their sick mother due to the media attention it would bring to him, and cause BBB sales to diminish.

Interestingly, in his career, LaVar has become a subject of criticism from others for many reasons. Forbes even said he was one of the most polarizing figures in sports today. So, his former teammates Joel Embiid and Ben Simmons have attacked Ball on social media, while John Wall, Kenyon Martin, Jerry West, and Reggie Miller have also criticized his impact on his children.

For example, Golden State Warriors head coach Steve Kerr once said about him

«People are eating out of his hands for no apparent reason, other than that he's become the Kardashian of the NBA or something. That sells, and that's what is true in politics, entertainment and now in sports.»

In March 2017, LaVar claimed that his son Lonzo was a much better player than Stephen Curry, who had been honored with the 'NBA Most Valuable Player' tag in 2015 and 2016. Ball was ridiculed heavily on social media for this remark.

In an interview on March 13, 2017, he claimed that he could have defeated Michael Jordan in a "one-on-one" basketball match if it ever happened. Ball was subsequently invited to First Take. Stephen A. Smith asked him why he was so confident he would beat Jordan. And at that point, Ball decided to get on Stephen A.’s level and spent the next five minutes yelling back and forth at him about that and a number of other things.

Also, Ball appeared on The Herd, Bal where was asked by Colin Cowherd and his co-host Kristine Leahy about the sales for his son Lonzo’s new Big Baller Brand sneakers. The questions seemed strange to Ball. He kept his back to her the whole time, told her, «Stay in your lane,» and even suggested that Big Baller Brand was not for women.

He also started a feud with US President Donald Trump, who had helped his son LiAngelo rid himself of a shoplifting charge in Hangzhou, China. Ball, however, refused to thank Trump. This made Trump write a series of tweets, referring to Ball as a "fool." The rivalry continued for a long time and gained significant media attention. Ball's adamant behavior led to LiAngelo's suspension from the 'UCLA.'

In November 2017, Ball criticized Los Angeles Lakers head coach Luke Walton for what he thought was a wrong approach to coaching his eldest son, Lonzo.

Due to his increased exposure, Ball has managed to produce certain basketball events in recent years. In January-February 2018, LaVar created the Big Baller Brand Challenge Games and Big Baller Brand International Tournament respectively. Most recently, Ball announced he would plan to set up a Big Baller Brand All-American Game on March 31, 2019.

Besides, LaVar Ball works as a coach of Vytautas, the Lithuanian team his sons LiAngelo and LaMelo play for, alebit for one game.