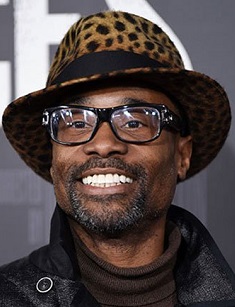 Billy Porter is an American actor and singer. He became famous thanks to his performances on Broadway; also he stars in movies and writes songs.

He achieved his first success in the role of Ensemble/John in Miss Saigon in 1991. His the most incredible acting part was the role of Lola in Kinky Boots (a Broadway musical based on the book by Harvey Fierstein), for which he got five awards.

Billy was born in Pennsylvania in 1969. His parents’ names are William and Cloerinda Jean Johnson, his sister’s – MaryMartha Ford-Dieng. William has left their family and Billy was raised by his mom and her new husband. Porter’s family was a difficult one because in his childhood there was some sexual abuse doing by his stepdad.

Billy told his mother that he was gay at the age of sixteen. It didn't go very easy because his family was strict and religious but the time helped them to understand, and now Porter consider his mom and sister very supportive and understanding.

Porter graduated from Carnegie Mellon University College of Fine Arts; he is a bachelor of fine arts in Drama. Also, he went to Pittsburgh Creative and Performing Arts School where he attended the Musical Theater classes. So we can see that he's got an excellent education.

In 2005 Porter wrote by himself and also played in the show named Ghetto Superstar (The Man That I Am) in New York. In 2014 he presented his off-Broadway play While I Yet Live which had huge success at Primary Stages.

Besides theatre, Billy is rather popular among the TV audience. He has one of the leading roles (Pray Tell) in the series named Pose (2018 – present), and in 2018 he was a part of the eighth season of AHS (American Horror Story). Speaking about movies, he was Shiniqua in Twisted and Randy in the nice Christmas film Noel.

Billy is not only an actor and writer. He is also a composer and a singer. He has released four albums: "Billy Porter" (1997), "At the Corner of Broadway + Soul" (2005), "Billy's Back on Broadway" (2014) and, the latest, "Billy Porter Presents the Soul of Richard Rodgers" (2017). Porter has never had tours, but he often has some concerts in special places in New York City, for instance, in "Joe's Pub."

In 2019 he released a new video on his song "Love the Pain away" which he wrote after the Columbine High School massacre. Columbine massacre (1999) was an armed attack by two students who killed thirteen people, and twenty-three were hurt. After that attackers killed themselves.

Billy Porter is gay, and he has a husband. In 2009 he started dating Adam Smith, an American businessman. They have met at the friend's dinner. In 2017 they got married and by the way, at this ceremony, Billy's sister, MaryMartha, was an ordained minister. The interesting fact about them getting married is that Billy insisted on the wedlock during the time while Barack Obama is still their president and while Donald Trump is not yet. Look what Porter says about this marriage:

In 2018 there was a published op-ed article where Porter shared with the world his story about abuse in his childhood. He told about his stepfather who had been raping him for four years, and this fact was rather difficult because Porter realized that all this hadn't been right just after lots of years. He had been calling this sexual moment with his stepdad an affair, but then Billy's therapist said:

"Seven-year-old boys do not have affairs with 50-year-old men. It's called sexual abuse. Plain and simple.”

This story was told in support of voting in the U.S.A.

"We are on the precipice of a modern civil war, so it’s time to stop taking a bag of popcorn to a gun fight. We have to stop in-fighting each other and band together to save our Democracy and earth’s humanity. …Who’s gonna join me? Pull it together people, it’s time to save the world! VOTE, B***HES!!! While we still can! It’s the only power we have!", – that’s what Billy said to his admirers trying to encourage them.

Billy is an active member of Broadway Cares/Equity Fights AIDS (the theatre’s organization that raises funds in support of people who have AIDS) and also an advocate of the LGBT community.

Porter is really fashionable, and at the 2019 Academy Awards he stood out from the rest of the guests. He was wearing an exciting combination of gown and tuxedo created by designer Christian Siriano. Clothing is not just fancy stuff he has; it’s more for him. It is an opportunity to express himself, his creative ideas. In his interview with Vogue he told that he had been always inspired by fashion. But it had been hard for him to show his identity because of being "black and gay". Fortunately, now he can say anything he wants through his outfit. And he managed that, as we can see. Net worth is $4 million.