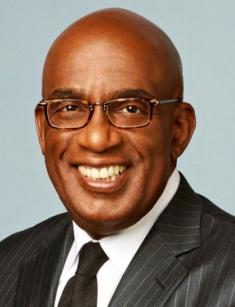 The native of Queens, Albert Roker has become a well-known journalist with forty years of experience and 10-time Emmy Award winner. He is a radio announcer, an actor, and TV personality. He received wide acclaim thanks to his widely known weatherman presentation on every Tuesday show live on NBC. Al tried his hands as an author, and published most of his show talking points in the book "Morning Show Murders". He is married to Deborah Roberts and has three children. Al's net worth is roughly estimated at $34 million, including all of his properties and earnings. His Today's salary is at least $10 million a year.

Albert’s birthplace was New York City. He was born to his Jamaican parents on August 20, 1954. Al grew up in a large family of eight. Apart from Al, there were five children in Roker’s family. His father was a simple worker, while his mother didn’t work and was engaged in housekeeping and raising children. Among Roker relatives, there were his paternal first cousin Roxie Roker, well-known actress, and her son, popular rock musician, Lenny Kravitz.

As a kid, Albert started interested in movies and cartoons. Inspired by animation, Al began going to cartooning and illustration club. After high school graduation, Roker entered the NY State University, where he studied broadcast journalism and graphic design. As a college student, Roker got his first job. He worked as a weekend weatherman at the local TV channel. In 1976 Roker earned a degree in communications and found weather casting jobs in Washington and Cleveland. Seven years after his graduation, Al returned to NY, started working as a weekend weathercaster for WNBC.

Al started his TV career when he joined a Cleveland-based NBC-affiliate WKYC-TV in 1978. He made regular appearances as a replacement on channel’s programs, such as NBC News at Sunrise and The Today Show. He was named co-host of NBC's annual Christmas at Rockefeller Center special in 1985, and eventually signed on for coverage of the Macy’s Thanksgiving Day Parade and the Tournament of Roses Parade. Roker received a career boost when Scott stepped down from The Today Show and recommended his protégé as his substitution.

Al Roker began making appearances on various TV series in 1990 when had received wide recognition in the TV world as NBC’s weekend weathercaster. Al made his first cameo in an episode of Another World. In 1994 he played himself in Reading Rainbow, and Mad About You.

Roker officially joined the popular morning program as featured anchor and weatherman in January 1996, a role that allowed him to expand his national profile. Along with reporting from the site of natural disasters like the Haiti earthquake in 2010, Roker conducted interviews with such famed individuals as longtime Peanuts cartoonist Charles Schulz.

Roker shouldered additional morning duties as co-host of The Weather Channel's Wake Up with Al show from July 2009 through October 2015. He has since moved to The Lift, a shorter program for the network's mobile app, and has focused efforts on the development of digital properties and content with the foundation of Al Roker Labs.

The accomplished newsman has won more than a dozen Emmy Awards, is a recipient of the American Meteorological Society’s Seal of Approval and has twice been named New York magazine's Best Weatherman. In June 2015, he was inducted into the New York State Broadcasters Hall of Fame. The same year he invited his brother and sister to his show.

In 2015 the cast of The Today Show dressed up as characters from The Peanuts Movie in a transparent promotional ploy conveniently tied to Halloween. Photos quickly spread across the Internet, accompanied by disbelieving qualifiers like "horrid" and "awful" and "nightmarish." Al Roker appeared as Charlie Brown. In 2017 Food Network star Giada De Laurentiis taught Al Roker how to make one of her favorite Italian-style sandwiches as she revealed the secrets to her success.

Fans love Roker for his unusual trendy looks. In March 2019 he debuted a new pair of glasses on Today, and the Internet couldn’t stop talking his new look. Roker swapped out his usual specs for a pair of bright cobalt glasses by eyewear label Dom Vetro. The weather forecaster thanked the label’s founder Ashley Bezamat for creating the fashionable eyewear that made him an instant eyewear style star.

“I have never had a reaction to a pair of glasses like these by @domvetro so thanks @ashleybezamat”.

The first wife of Roker was Alice Bell, a journalist whom he met at the earlier stage of his career. They had a wedding in December 1985. The couple lived together for almost a decade before their separation in 1994. They welcomed their first child in 1987.

In 1990 Roker met Deborah Roberts, new NBC's reporter. They kept in touch for two years while Roberts was in other cities. In 1992 she returned to New York as an NBC’s correspondent.

On New Year's Day in 1994, Roker proposed on the rim of the Grand Canyon. The couple tied the knot in September 1995. Al and Deborah have two children, daughter Leila, born in 1998, and his son, Nicholas Albert born in 2002.

Al Roker is known for his successful weight loss journey. Several years ago, he weighed 340 pounds. In 2013 Roker said that his weight got that high because of a combination of “not feeling worthy,” along with being worried he “wasn’t as good as he thought he was,” and that he just “really liked the food.” However, Al made a promise to his dying father, that he’d drop the weight. As a result, he dropped about 100 pounds.

Since September 2018, Al Roker has been on the keto diet, and the results have been phenomenal. The high-fat, low-carb program which has earned praise from such celebs as LeBron James, Vanessa Hudgens, and both Kourtney and Kim Kardashian has helped the once rotund Today show weather forecaster shed some major weight.

Al Roker has always been active in charitable work. In 2007 he became an official supporter of Ronald McDonald House Charities and a member of their celebrity board, called the Friends of RMHC. A year later, Al hosted the 2008 TV charity show Celebrity Family Feud. All in all, Roker has supported eleven charities, including AmberWatch Foundation, American Foundation for AIDS Research, Flawless Foundation, Paralyzed Veterans of America, and Soles4Souls.

In 2018 Al Roker surprised everyone with a special, early morning appearance during the TODAY Show. They chose the City of Good Neighbors to be part of their Neighbors Helping Neighbors series. It celebrated people like 96-year-old Daisy Estelle Anderson, who had spent countless hours giving back to the community as a volunteer with Ladies of Charity.