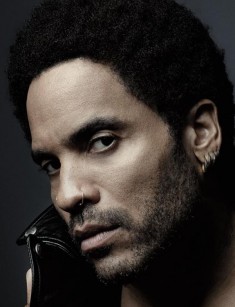 Many people view Lenny Kravitz as the music guru. His excellent vocal, emotional songs, and colorful appearance conquer the most demanding listeners. Kravitz is often compared to other music legends, such as Bob Dylan and Jimi Hendrix.

The singer himself treats such comparisons philosophically: he just does what he likes and creates excellent music.

Leonard Albert Kravitz was born on May 26, 1964, in New York into a wealthy family. His father Sy Kravitz was Jewish and moved from Ukraine to the USA where he started working as a producer on NBC TV News; thus, he could provide his family with a decent life. The future star’s mother Roxie Rocker came from Brooklyn and built the acting career.

Lenny spent his childhood in the richest district of New York, Manhattan. The small boy was absorbing art and TV and meeting famous musicians. Kravitz mentioned that he used to listen to Duke Ellington sitting on his lap.

In 1974, the parents moved to Los Angeles. From that period, Lenny was actively engaged in music: he sang in the California Boys Choir and learned how to play the guitar, drums, and keyboard.

Lenny Kravitz started his professional career when he was a high-school student. At 16, the young man left the parents’ house and began to live on his own. The ambitious youth took the pseudonym Romeo Blue, created several demo recordings, and spread them. Eventually, I.R.S. Records noticed the young man, but their cooperation was not long.

In 1989, Lenny signed the contract with Virgin Records; he had been working with this company for more than 20 years.

The same year, Lenny presented his debuting album Let Love Rule. People were buying it quite actively, and Kravitz got many fans. Each song demonstrated Lenny’s fantastic vocal and spotless playing skills.

Soon, Kravitz began to tour and give performances on TV. As a result, he earned his fame in America and many European countries. The collaboration with Madonna was a breakthrough for the young singer. He was the co-author of her popular song “Justify My Love” which topped charts for a long time.

Political events were also reflected in the musician’s works. In 1991, considering the possible conflict between the United States and Iraq, Lenny and other musicians prepared the cover for the legendary song by John Lennon “Give Peace a Chance.” The second album Mama Said also appeared that year and became platinum.

Kravitz did not want to limit himself with singing and tried himself as a producer. In 1992, he helped prepare Vanessa Paradis’s first album.

The next year brought the cooperation with Mick Jagger and their single “Use Me.” Besides, Kravitz was the co-author of a song by Aerosmith.

In 1985, the new album Circus came out; it became golden and proved the musician’s popularity and talent.

The same year was marked by the musician’s personal tragedy: his mother died. Despite the enormous stress, the tour planned for the following year took place in 40 American cities.

Two years later, the musician presented his new studio album with a laconic title 5. It was a big run among people and became platinum soon. The song “Fly Away” was number 12 in charts, and Lenny won the Grammy Award for Best Male Rock Vocal Performance.

Year by year, the musician was working hard on his career. In 2001, he had the sixth album Lenny released. The song “Dig In” was included in the top 40 songs; Kravitz won the Grammy Award again.

The singer wanted more independence from his producing company and created his own label, Roxie Rocker (in honor of his mother) in 2003. Although the musician continued to collaborate with Virgin Records, he had the next album Baptism presented by his own company.

Only four years later, the eighth studio album It Is Time for a Love Revolution came out. It was a tremendous success; many critics called it the best album of the musician.

In 2011, the ninth album Black and White America was released. In the popular NBA ad, the first single of the album, “Come On Get It,” was used.

The talented musician tried himself as an actor as well. In 2001, he played himself in Ben Stiller’s Zoolander; undoubtedly, his acting was natural. In 2009, Kravitz appeared in Precious by Lee Daniels and took the role of Nurse John.

In 2013, the musician appeared in The Hunger Games sequel. The same year, he played James Holloway in Lee Daniels’s The Butler.

In 2015, the singer worked on the drama Little Rootie Tootie by Daniel Algrant and co-starred with Christopher Walken. In 2016, Lenny started participating in the series Better Things and Star. In 2017, Kravitz appeared in Lee Daniels’s Iced; the presentation date remains unknown.

The musician’s talent manifests itself in business. In 2016, the new Rolex line was presented; Lenny Kravitz took part in its production.

Today, the legendary singer is actively involved in music and gives performances all over the globe. Not all concerts are perfect, though. For instance, in 2015, Kravitz had his panties torn during a show in Stockholm so that the audience could see his manhood. Nevertheless, the 51-year-old singer went to change his clothes only after he finished the song “American Woman.”

Lenny Kravitz has not released new albums for a long time, but there is hardly any reason to worry. It is a common practice for him to take a break for several years and then present a new masterpiece. He mentioned that his career was like climbing a mountain: the musician devoted all his life to music and wanted to continue because he could not imagine giving it up after all those years.

Kravitz has always been popular among women and won the hearts of many celebrity beauties. In 1987, the man married the actress Lisa Bonet; the next year, their daughter Zoë Kravitz was born. Today, she is a famous singer, actress, and model.

At that time, Lenny was not interested in his wife and children: he was not ready to the steady relationship. There is no wonder the couple split up in 1993. However, the man established the warm relationship with his daughter. Zoë even preferred to live with her father when her mother married again.

After the divorce, Lenny Kravitz had many love affairs with famous women. He was called the major heartbreaker of Hollywood. The musician used to date Madonna, Natalie Imbruglia, and Kylie Minogue. One of the most famous models, Naomi Campbell, could not resist his charm. The musician was engaged with the supermodel Adriana Lima. Vanessa Paradis and Stella McCartney also were mesmerized by the singer.

Lenny Kravitz and the actress Nicole Kidman were close for a long time; the couple even planned to marry, but the actress had to break the relationship when she learned that Kravitz had cheated on her with the Brazilian artist Isis Arruda. Later, the man was seen with another actress, Michelle Rodriguez. The media also reported Kravitz and the Spanish beauty Penélope Cruz were dating.

In 2007, there were rumors about the star’s possible marriage to Ekaterina Kovaleva, the 20-year-old model from Omsk. They allegedly met in Saint Petersburg where the musician gave a concert and started texting each other after the man came back to the United States. Later, the young woman was said to move to her lover. However, no marriage followed; the whole story was probably made up. 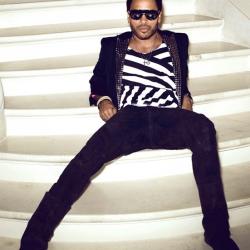