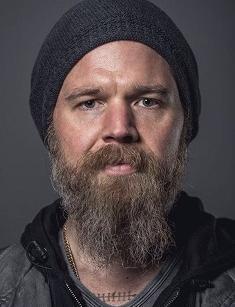 Ryan Douglas Hurst is an American actor, known for his roles in series The Walking Dead, Bates Motel and the movies Remember Titans and Saving Private Ryan.

Due to his height, he stars in roles of brutal character, soldiers or athletes. On his account, there are nearly five dozen works in film and television series. The peak career of the actor came in the mid-2000s. Although now the interest of Hollywood filmmakers to him has a little pause, he remains in demand.

Hurst was born in the USA: Santa Monica, California on June 19, 1976. His birth sign is Gemini. A gifted actor has shown an interest behind the camera. Ryan Hurst has been destined to get a career in cinema considering his mother's (Candace Kaniecki) job of an acting coach and father's (Rick Hurst) occupation on the TV.

He has received his first commercial work even before the graduation of a primary school.

Growing up in a Hollywood, Ryan made an early start and essayed his powers in show business in the NBC teen sitcom Saved by the Bell: The New Class.

After an appearance in commercial shows and not with little tips from mother and father, young Ryan began to hit the stage. Together with his playing Brutus in Julius Caesar and his participation in such familiar plays as Harvey and Guys and Dolls, Hurst staged own adaptation of Cyrano de Bergerac in the Santa Monica Civic Light Opera. He received the Best Performance award from Backstage West for Canon Theater production of his play The Last Night of Ballyhoo.

Ryan Hurst was brought up in the cultural surroundings of Hollywood actors, so he was very young when he started his career. The first time in his life Hurst surfaced in comedy series for teens Saved by the Bell: The New Class in 1993, where he played Crunch Grabowski. Up to the end of the ’90s, Ryan appeared in various series, including Beverly Hills and Wings. He made his movie debut in 1997 in The postman of Kevin Costner, which followed with Saving Private Ryan. This war drama has brought Hurst deserved recognition. His character is a paratrooper Mendelsohn with temporary hearing loss who is not able to understand Captain Miller's words and have to communicate by writ-ing.

Another film of this genre followed this work: We Were Soldiers where he acted Sgt. Savage. In 2004 Hurst was a footballer Lump Hudson in The Ladykillers, and a year later he was filmed in TNT police series Wanted. The following several years Hurst devoted to working in NBC's mystic drama series Medium as Allison DuBois' brother, Michael Benoit.

The high point of his career was a role of Opie Winston in crime series Sons of Anarchy, where he starred together with Charlie Hunnam. Playing a subordinate position at first, he was soon promoted to the major one and became a favorite of the fans. Sons of Anarchy tells about the basis of an in-ternational biker club from a small town in California. Opie has to turn back to SAMCRO to make his living after five years of prison, despite risks and his family’s objections. Distinctive haircut, a motorcycle, and tattoos make his character look sexy and brutal. Hurst even shaved his beard on camera to please his followers. Death of this character has brought the high drama on Sons of Anar-chy, and it also has broken a lot of hearts. SAMCRO member Harry “Opie” died in retaliation for the death of a rival's daughter. This role has brought Hurst Satellite Award for Best Supporting Ac-tor – Series, Miniseries or Television Film in 2011.

At the same time, he voiced Jedidiah in Rango, the hit cartoon. In August 2018 it was announced that he would act Beta in the long-awaited series remake of The Walking Dead. Beta has an iconic appearance with his terrible mask, golden teeth, and a leather trench coat. In the new season of The Walking Dead, Ryan got the role of the “right hand,” an assistant and faithful ally of Alpha (played by Oscar awarded Samantha Morton), the main antagonist of the season. Alpha leads a group of Whispers that wear zombie skin as a disguise to avoid the attacks of the walking dead.

Starting in 2014, he worked in the criminal series Bosch, and in 2016-2017 played the role of Foster Farrell in the TV series Outsiders. The story tells us about the Farrell family who lives in the moun-tains. This family is not like everyone else; they are solitary and try not to let outsiders close to their homes. These places are mysterious and even dangerous for ordinary people who are not accus-tomed to the Farrell way of life, but this fact is only in the hands of the clan because they do not want their life to become public. From time to time, the picturesqueness of these places attracts rich people who dream of owning this remote corner of the earth from the civilized world.

In September 2018, Ryan starred with his Sons of Anarchy colleague Charlie Hannam in A Million Little Pieces. Critics negatively commented on this work. The film tells about the young writer James, who has to go to a rehabilitation center for the treatment of drug addiction and alcoholism. The procedures are on the verge of torture. Here he meets a mafia boss addicted to alcohol and a pretty young drug addict.

Hurst met his spouse Molly Cookson in 1994, and they got married in 2005. They created and founded a company Fast Shoes Productions, which is engaged in independent cinema, and gathered the theater troupe Viking Underground actors' repertory company. They have not got children.

His Instagram page in net is worth visiting to understand what kind of person Hurst is. You will not find any shirtless photos there. But you will see Ryan’s amiable dogs at his house, learn about upcoming movies and look at his appearances from 2018 up to nowadays.

Ryan Hurst has achieved considerable success in the film industry. His talent is universally recog-nized, and he has a large number of fans of his work. And his fan base is continuously growing. The actor is actively acting in films and TV shows of different genres. He can reincarnate in different characters. Ryan is equally eager to take on roles in movies and television series, and he is not going to stop there. Although the actor has no prestigious cinema awards, no one doubts his professional abilities.