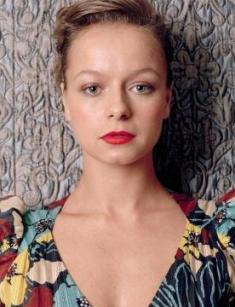 The British actress Samantha Morton is the international celebrity who has been nominated for two Academy Awards, the Golden Globe, and other prizes.

The would-be actress was born in May 1977 in Nottingham. Her childhood could hardly be called happy: when the girl turned three, the parents divorced. The mother left Samantha and her elder brother and sister to father and moved to another city with her new husband. The father did not take much care of the children, too: the poet and socialist activist had no time to raise them.

The siblings had to travel from one orphanage to another and change foster families. Nevertheless, the actress does not make a big deal of her childhood: she says it just happened that way and passed. Samantha’s foster mother died, and the artist does not communicate with her biological parents.

The British celebrity showed her interest in acting at seven: the girl liked theater games and created small plays; she took all roles at the same time. At 13, Samantha’s teacher noticed her abilities and recommended her to enter an acting school.

Morton followed the advice and spent three years at Central Junior Television Workshop; this is where she appeared on the stage first. At the age of 14, the girl debuted in the popular British series Soldier Soldier.

Given the circumstances, Samantha had to grow up early. As long as the young woman collected some money, she went to London and rented an apartment; she lied about her legal age. Soon, 16-year-old Morton got hired at the Royal Court Theatre.

In 1994, the 17-year-old artist debuted in an episode of the British crime drama Cracker; she personified a cult murder victim. The actress played so convincingly that directors noticed her and started inviting her to their projects.

Samantha’s roles were diverse: Harriet in the TV drama Emma, a young prostitute in the series Band of Gold, the main character in the mini-series Jane Eyre. She managed all of them splendidly. The 1997 movie Under the Skin brought the artist the prestigious Boston Film Critics Society Award.

When Woody Allen watched this movie, he was so impressed by Samantha’s skills that he offered her one of the lead parts in his new project, Sweet and Lowdown. Morton personified the mute friend of the main character (Sean Penn).

Allen was not the only one who noticed the British star: the woman had received an offer to play Ophelia in the new screen version of Hamlet with Ethan Hawke. However, Samantha rejected the role in favor of Allen’s project. It is peculiar that she had heard nothing about the famous director and watched no movie made by him. She learned about the large scale of Sweet and Lowdown only when she began to shoot.

The woman’s career was developing rapidly. In 1999, she participated in several popular movies: low-budget Jesus’ Son, Dreaming of Joseph Lees, and The Last Yellow.

In the 2000s, the artist continued to star in various pictures. She worked on the drama Morvern Callar and gained British Independent Film Award for it. The next year, the movie about the life of Irish migrants In America was premiered; it had three Academy Award nominations, one of which was Samantha’s. Once again, the woman was close to the victory, but Charlize Theron surpassed her.

With all that being said, that period was quite successful. In 2002, the celebrity participated in Steven Spielberg’s Minority Report and personified the psychic Agatha. In 2003, Morton appeared in the fantastic thriller Code 46. Four years later, she got a role in Control, the biopic about the iconic musician Ian Curtis (Sam Riley); she played his wife. The project brought the actress a BAFTA nomination.

Further on, Samantha joined the cast of the drama The Libertine starring Johnny Depp and Longford that gave her the BAFTA-TV nomination and the Golden Globe Award – Best Supporting Actress – Series, Miniseries or Television Film.

Among all the actress’s works, one of them is not included in her filmography. In 2013, she participated as a voice artist in the fantastic drama Her with Joaquin Phoenix. All the material was made; Samantha worked hard on all scenes and helped Phoenix make his character deeper. However, the director decided to replace the actress with Scarlett Johansson. No scandal followed. To show gratitude to Samantha, she was called the producer’s assistant.

In 2015, the artist appeared in the crime series The Last Panthers as Naomi. The next year, fans watched her impeccable acting in Fantastic Beasts and Where to Find Them, the screen version of J.K. Rowling’s bestselling book. Eddie Redmayne, Katherine Waterston, Alison Sudol, Colin Farrell, and Johnny Depp also starred in the project.

In 2000, the woman gave birth to her daughter Esme; her colleague Charlie Creed-Miles was the father. Morton’s independent and non-compromising character manifested itself: she split up with the man at an early stage of her pregnancy.

Still, Samantha’s personal life turned out to be happy: she met the director Harry Holm at the move set of the video for the group The Victims. Soon, the lovers started living together and got two kids.

In 2008, the actress demonstrated her strong will once again: she confessed she had had a severe head injury in 2006, lost her eyesight, and was paralyzed partially. Samantha had to undergo a long and difficult rehabilitation course; the woman learned how to speak and move again. Nevertheless, she did not break and managed to get back to the stage.

Morton does not keep her private life secret and shares the details via Instagram. She has a Twitter account, too, and publishes political and social news there. The artist described herself as a mother, actress, writer, director, and fighter for children’s rights in her status.

The British celebrity is known for her not-so-easy character. Morton is quite selective when it comes to choosing her roles. Besides, Samantha’s tongue is sharp: she gives scathing comments on Hollywood masters while her colleagues do not dare to do that.

In 2017, the artist participated in the series Harlots. She liked the historical reconstruction and agreed to personify the main role of the London brothel administrator Margaret Wells. Lesley Manville played her partner.

The series proved to be popular, and its creators expanded the story; the second season was premiered in 2018. The same year, Samantha played in the drama Two for Joy.

Morton joined the Justice and Equality fund created by 200 British and Irish actresses. The organization’s aim is to protect female movie makers from sexual harassment. Many celebrities including Samantha Morton signed the open letter: Kate Winslet, Keira Knightley, Emilia Clarke, Emma Watson, Noomi Rapace, and others. To show their sisterhood, all the actresses were wearing black during the BAFTA Ceremony in 2018. A similar movement had started a while before that in the United States.

Samantha Morton’s net worth is estimated at $10 million in 2019.