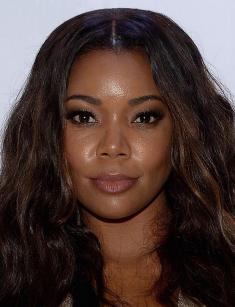 Gabrielle Union is an American model and actress famous for the movies Cradle 2 the Grave, Daddy's Little Girls, Think Like a Man, and The Birth of a Nation. The star of romantic comedies is an outstanding fighter for women’s rights; she has expressed her views in the 2017 book We're Going to Need More Wine.

Gabrielle Monique Union was born on October 29, 1972, in Omaha, into a Catholic family. The father devoted himself to military service, and the mother worked for a telephone company and organized volunteer social projects. The girl grew up in the atmosphere of independence and urged for a better life. Thus, the problems with the teenager’s self-esteem turned out to be an unpleasant surprise for the parents.

The young woman did not look like her long-legged, blue-eyed peers, and she felt insecure. As a school student, she did sports instead of going to dates or dancing: Gabrielle ran tracks and played soccer and basketball.

At the age of 19, Union was sexually assaulted right at the shoe store where she worked. The shock and humiliation imprinted on her mind and made her bring on the issue of rape and violence against women; she became a passionate protector of women’s rights.

Gabrielle graduated from The University of California where she studied sociology and started working as a model. Movie creators noticed the young woman in an agency; soon, the artist gained her first episodic roles.

Union debuted in the series Family Matters and also appeared in an episode of the iconic Star Trek: Deep Space Nine. The big-screen career began with the romantic comedy She's All That starring Freddie Prinze Jr. and Rachael Leigh Cook. The movie reviews were positive, and the actress found herself quite popular. In 1999, Gabrielle participated in five projects including the modern version of Shakespeare’s work, 10 Things I Hate About You.

In the late 1990s, the artist worked on the series Clueless, Grown-Ups and other projects. The role in the movie Bring It On was the breakthrough for her; thanks to it, she got a part in the drama City of Angels. Besides, Gabrielle personified the main character in the eccentric comedy Deliver Us from Eva.

In 2007, Tyler Perry offered Union the lead part in the movie Daddy’s Little Girls. The role of the lawyer who has some troubles with her romantic relationships was created specifically for Gabrielle, and she managed to play it splendidly. In 2008, the woman changed her stage type of a comedy actress: she personified the straight-laced wife of the popular blues musician Muddy Waters in the musical Cadillac Records. According to the artist, it was one of her best works.

Following the wave of success, Union came back to TV shows and participated in the series Life and Army Wives; both proved to be quite popular among the cable TV audience. In addition, Gabrielle played a secondary character in the fantastic series FlashForward and was nominated for NAACP Image Award for Outstanding Supporting Actress in a Drama Series.

2012 was marked with another collaboration with the director of Daddy's Little Girls: the artist appeared in his new movie Good Deeds. She also starred in the social comedy Think Like a Man.

When the actress earned her popularity, she started selecting projects; she accepted only those offers that matched her own nature. Following this principle, she agreed to play in In Our Nature, the debuting movie by Brian Savelson; she considered that role her personal achievement.

The role in the historical drama The Birth of a Nation brought another moment of triumph. The figure of Esther who was sexually abused bore much resemblance to the actress who had been attacked in her youth.

The project inspired Union to reconsider the events of her own life and write the memoirs We're Going to Need More Wine that won the award of The Root magazine. Gabrielle pondered various “women’s” themes including love, friendship, sex, marriage, external beauty, and so on.

The National Football League player Chris Howard was Gabrielle’s first husband. The young people met in 1999 at a party and married in a while. Union, who had been dreaming about a wedding from her childhood years, confessed that she rushed to marry. However, the life with Howard was far from being perfect, and the couple divorced.

In 2009, the actress met the basketball player Dwyane Wade who had already had three children. The couple tested their feelings for five years. The wedding ceremony took place in Miami. The spouses signed a contract that protected their rights.

Gabrielle miscarried several times as she was trying to get pregnant; eventually, a surrogate mother gave birth to a new baby. The girl Kaavia James Union Wade was born in late 2018.

Gabrielle Union is not only a talented actress but also a successful businesswoman. The celebrity has created hair products Flawless by Gabrielle Union; she has a share in Invicta Watches.

Today, the actress spends all her time with her daughter.

The young mother looks brilliant and sexy. Gabrielle posts touching family photos and her own pictures on Instagram; sometimes, she is wearing a swimsuit there.

Union does not intend to leave the movie industry. The series L.A.'s Finest is one of her recent projects.