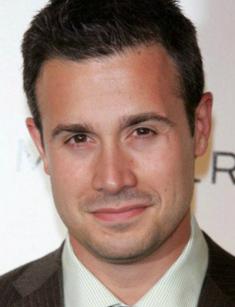 Freddie Prinze is a favorite of the audience, whose youth fell at the end of the nineties and the beginning of the two thousandth years. The popularity of the actor helped to win the youth pictures, where he tried the role of the high school students and young men who have just left the school walls.

Freddie Prinze Jr. is named after his father, the famous American comedian, who starred in the funny TV series. The boy was born in Los Angeles. The father doted on the child, affectionately calling him Pie (translated as a cake). James was not even a year old when the head of the family committed suicide.

The widowed Kathy Elaine Cochran, real estate specialist, moved with her son to a ranch to her father in Albuquerque. So, except for the mother, the future actor had one more educator, his grandfather. As a child, the boy often went to his grandmother on father side in Puerto Rico, where he learned to speak Italian and Spanish well.

As a child, Freddie had a lively imagination. The artist tells journalists that he built in his head the whole world full of friends and exciting adventures. He says that the ability to think creatively in the future helped to transform into the heroes of the films and to write scripts.

He got acquainted with the theater scene when he was a teenager. He studied acting in the ranks of the theater troupe Duo Drama Company. Prinze changed three schools, but he decided not to go to college because the already deplorable financial situation of the family would have worsened. The young man went to conquer Hollywood, knowing about his natural charisma. The Star Factory took the handsome man with open arms.

Freddie Prinze made his television debut in the series, and his first job was a role in an episode of the serial film Family Matters. He starred in the projects of this kind for two years, but popularity never came. But he managed to work with the future celebrity Claire Danes and the star Michelle Pfeiffer.

Everything changed in 1997. Freddie shone with Jennifer Love Hewitt and Sarah Michelle Gellar in the sensational horror film I Know What You Did Last Summer. The first fame came after the premiere, the young man was recognized on the streets, and the producers gave offers. The continuation of the horror, in which a young man was invited again, was less successful.

The next project turned Freddie into a world-class star. He headed with Rachael Leigh Cook the cast of the comedy melodrama She's All That. The type of the young actor suited well for the role of Zack Siler, who was an excellent student, the first boy at school, the captain of the football team. This is a love story with the inconspicuous, modest classmate Laney Boggs and the young man tries to make her the prom Queen.

Prinze starred annually after the dizzying success; sometimes only two films were released with his participation per year. The failure was the tape Wing Commander, although the authors and actors had high hopes for it and the film is unpredictable. But the audience remembered the work Down to You, where Prinze played with Julia Stiles, as well as Boys and Girls with Claire Forlani. These films gained popularity among teenagers.

In 2002, he appeared as a guest on the set of the legendary series Friends.

The filmography supplemented with the mystical comedy, based on the cartoon Scooby-Doo, and then in her sequel. The work became special for Freddie because the comic book about the talking dog was a favorite in his childhood. And he was lucky to become a part of this fantastic story. Freddie Prinze turned into a character Fred Jones. Sarah Michelle Gellar was again a couple of the actor and Linda Cardellini, Matthew Lillard, Rowan Atkinson were also involved in the tape. There was even the place for Pamela Anderson, who played herself.

The series continue to appear in the creative biography along with a full-length movie. Freddie was entrusted with the role in a legal drama with elements of the comedy Boston Legal, which appeared on television from 2004 to 2006. The audience warmly welcomed the serial film, the work of the actors and creators was noted in the professional circles: the melodrama won five Emmy Awards and one Golden Globe.

At the beginning of "zero" Freddie Prinze tried his hand at producing and even wrote scripts. The young man promoted the series Mutant X, acted as a co-author of the project Rave Train. The actor voiced the cartoon characters. For example, he participated in the voice parody cartoon series Robot Chicken and the cartoon Shark Bait.

Fans were looking forward to the promised animated film based on the fairy tales of the Brothers Grimm Happily N'Ever After. He shared here the role with Andy Dick, Sigourney Weaver and other comedians and movie stars.

In recent years Freddie only participated in the series. He pleased with the appearance in the political thriller 24 (2010), the fantasy Witches of East End (2013) and the detective of Hart Hanson Bones (2013).

In 2000, handsome Freddie, who is 72 feet (182 cm) tall and weighs 154,32 lbs (70 kg), was in the list of The 50 Most Beautiful People in the World, formed by the magazine "People." The young man was always popular with the opposite sex, but he did not excel in the number of affairs. He is known as a monogamous and a supporter of strong long-term relationships. It is known that the young man met with Kimberly McCullough for three years, who is a dancer, an actress and a TV director.

In 2002, fans discussed the news that Freddie Prinze married. The chosen one was a partner in several films Sarah Michelle Gellar, famous for her main role in the movie Buffy the Vampire Slayer.

When the couple met, Freddie was still in the relationship with McCullough. One day he happened to be with his future wife in a pizzeria one-on-one because other actors, who were involved in I Know What You Did Last Summer, did not come. They said goodbye, after lunch.

Later, when she found out about the parting of Freddie with his beloved, Sarah decided to take the first step and left a message on the answering machine:

"Hey, I've heard rumors that you returned, if you want to go to a sushi restaurant together – call me."

People say that the actress Tori Spelling who fell in love with Prinze wanted to destroy the relationship, she even promised the roles in the projects of her father, media magnate Aaron Spelling. But the young people were able to keep the love despite the machinations.

The wedding was arranged modest, few. The bride and groom swore eternal fidelity in the chic Mexican resort of Puerto Vallarta. They have two children: a daughter Charlotte and a son Rocky.

Freddie's hobbies are dancing, Asian cinema and collecting of comic book. The man is a fan of the London FC Arsenal. The actor regularly leads a page on "Instagram," he shares with fans the latest news from his personal life, talks about professional feats.

Since 2014, fans lost Freddie. The man ceased to please with the roles in movies; he occasionally participated in the voicing of the animated films. He gave the interview grudgingly.

In rare conversations with reporters, Prinze said that he moved away from the world of cinema, he directed attention to family and children, has the idea to open his restaurant, because he can cook and loves to cook.

In early 2018, the media pleased: Freddie Prinze returns to television screens. The actor got a significant role in the comedy project CBS Mom So Hard. Prinze transforms into a former athlete, forced to work at home, while shooting "pilot."