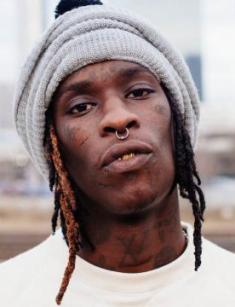 Young Thug is an American hip-hop musician from Atlanta who managed to leave the criminal world and earn international fame. The artist’s life has been full of crazy moments, and the audience takes much interest in it.

Jeffery Lamar Williams was born on August 16, 1991, in Atlanta. The boy grew up in the southern area of the city. His family was large: 12 children from different fathers. The mother could not provide them with everything they needed.

Jeffery got involved in the criminal environment and had bad habits early; he used drugs and gambled. The boy’s elder brother died during a shoot-out; the atmosphere got even worse.

Lamar did not even finish an elementary school; he broke his teacher’s arm at the sixth grade and got into a juvenile prison for four years.

At the age of 17, the young man became a father. At the same period, he took an interest in music and promised to himself he would no longer live in poverty and chose his stage name “Young Thug”.

The rapper began his career in 2010 and presented a mixtape series I Come from Nothing in 2011-2012. The famous rapper Gucci Mane, who also came from Atlanta, noticed the young man and offered him to collaborate with his label 1017 Brick Squad Records; the contract was signed in 2013.

The same year, Young Thug created the fourth mixtape, 1017 Thug; music critics marked the artist’s original style. The new collection was included in Pitchfork’s Albums of the Year: Honorable Mention, as well as Complex’s The 50 Best Albums of 2013. Even Rolling Stone put the mixtape to the fifth position in the 10 Best Mixtapes of the year.

The song “Picacho” with Maceo became one of the most notable tracks in 1017 Thug. At the end of 2013, Rolling Stone, Pitchforks, and Spin mentioned it in their lists of best songs. The same year, Thug introduced his first singles, “Stoner” and “Danny Glover”, that proved to be great hits among the youth. However, there were no remix versions: the artist stood against it.

The world got acquainted with Young Thug in July 2013. Complex put him in the 25 New Rappers to Watch Out For list. Perhaps, his music was not for everyone: the rapper twisted his voice and made words sound unclear; as a result, some people treated his works as meaningless. However, many young people fancied it and danced to it in nightclubs with pleasure.

2014 was a fruitful year: the rapper Future offered him $1.5 million for joining the label Freebandz. More than that, Kanye West began to collaborate with the young man; they recorded many tracks together. In March, Thug presented the album Carter 6 – the album under the same title had been released by Lil Wayne whom Jeffery genuinely admired. However, Wayne was not much excited about it, and the musician had the disc renamed into Barter 6.

2015 brought the music video “Power” that enjoyed many favorable reviews and earned American youth’s love. The rapper grabbed people’s attention thanks to his singing manner and looks: he wore brandy clothes that made him bright and conspicuous.

In 2016, Thug presented the track “Future Swag” with his photo in a dress on the cover. Fans liked his artistic decision and emphasized the new level in his work.

The same year, the rapper went to his debuting tour and gave shows in big cities along with Rich the Kid, TM88, and Dae Dae; he performed the songs from the mixtape HiTunes. Fashion designers appreciated his style, and the rapper participated in the fall campaign for Calvin Klein 2016.

2017 was notable for several music videos with international celebrities; the musician earned fame worldwide. In April 2017, Young Thug collaborated with 2 Chainz, Wiz Khalifa, and PnB Rock; they recorded “Gang Up” and presented a video a little later. On October 24, 2017, Camila Cabello’s official channel posted the song “Havana” with Young Thug; it received more than 700 million views within two years.

In 2019, the artist collaborated with the rapper Strick and released the song “Big Apple”; it was included in Strick’s new album that came out on January 9.

The rapper’s personal life has been rich. By 25, the man had six children from four women; there is little information about them on the Internet.

The couple is engaged; they will marry soon. Jerrika is her lover’s personal stylist and picks outfits for him.

In 2015, Young Thug was arrested: he was threatening to kill a security guard in an Atlanta trade center.

Today, the artist is working on new projects and keeps expanding his discography. He often shares photos from concerts and recording studios on his Instagram page.

Jeffery likes to wear expensive clothes and take pictures; sometimes, one can see him in women’s garment. The rapper loves luxurious cars, such as Lamborghini and Rolls-Royce.